Read on to see what you can expect in the much-anticipated major revision to Windows 10.

After eight months of testing, Microsoft will officially launch its latest revision of Windows 10 called the Creators Update, version 1703. Previous releases included the Anniversary Update (1607), November Update (1511) and the initial release, 1507. For those interested in knowing, the final build number is 15063.0, but this will be incremented with cumulative updates over time. Windows 10 is part of Microsoft’s software as a service strategy, which constantly delivers new features and functionality through frequent Windows updates. So far, the company has maintained a cadence of two major updates per year.

New features have also been delivered as major out of band updates through the Windows Store. Each release adopts a theme. The Creators Update, for instance, puts emphasis on creativity, with a plethora of features for users who want to make and share stuff, whether it’s 3D imagery using the new Paint 3D app or annotations made with the improved inking features. The Creators Update is bursting with a lot of refinements and the more than two years of constant feedback and testing has done wonders for the operating system.

Originally code-named Redstone 2, the new update includes a vast collection of improvements. One of the core benefits of the new development process is security. A new Windows Defender Security Center application provides users a centralized environment for managing the health, protection, and performance of their computer. Microsoft is also listening to customers carefully. Users can see this in areas such as the improved Windows Update experience, which removes the hardline approach to installing updates. More transparent privacy options also help users to better understand what they are sharing with company.

Today, I’m excited to share our latest update to Windows 10, the Creators Update will begin to roll out on April 11. The Creators Update is designed to spark and unleash creativity, bringing 3D and mixed reality to everyone and enabling every gamer to be a broadcaster. Beyond creativity, it brings new features to Microsoft Edge, additional security capabilities and privacy tools, and so much more. Source 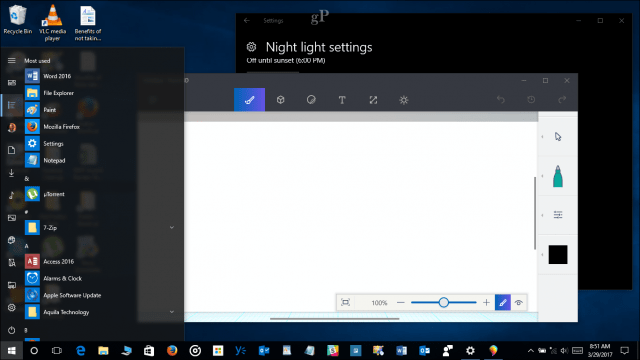 Of course, you don’t have to wait until April 11 for the release—official ISOs for the Creators Update are currently available on Microsoft Servers. You can also download the Upgrade Assistant, which will kick off the upgrade right away. If you have not already, check out some of our previous coverage of the new Creators Update features, such as Paint 3D; improved Microsoft Edge Web Browser; Night Light; improved Start menu and Cortana; better touchpad gestures; Dynamic Lock; Windows Defender Security Center; Hyper-V Quick Create and more personalization and color options.

How has your experience been with Windows 10 since its initial launch? Let us know what you think in the comments.