The latest revision of the infamous Get Windows 10 (GWX) app now offers a clear way to decline the Upgrade Offer which ends on July 29th.

Remember those threats of lawsuits we mentioned users were planning because of Microsoft’s Windows 10 Upgrade offer? It looks like they do work after all. The latest revision of the infamous Get Windows 10 (GWX) app now provides a clear way to decline the Upgrade Offer which ends on July 29th.

The latest revision of the Get Windows 10 app now features an easy to find decline button. Previously, launching the app then closing it was interpreted as consent to carry out the upgrade. We have compiled solutions for managing GWX; it’s quite unfortunate it has taken this long to find common ground, though.

How to Disable the Get Windows 10 Update GWX App Completely 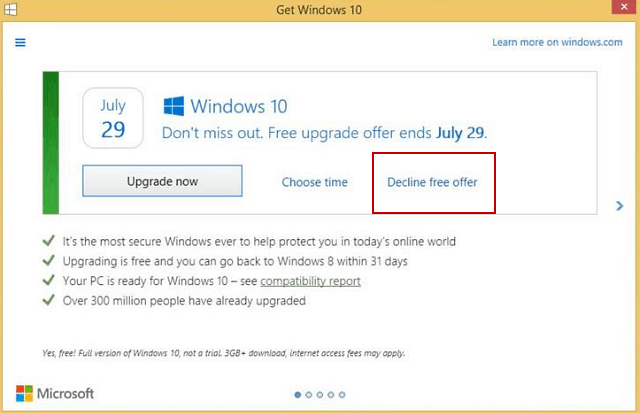 Recently, a user in California, Terri Goldstein, filed a lawsuit against Microsoft. Goldstein sought compensation for damages due lost wages and down time due to the Windows 10 upgrade. The company’s customer support was unable to fix her computer as a result of the Windows 10 auto update. Surprisingly, she won the case with a settlement of $10,000.

Microsoft is encouraging the Windows 10 upgrade for many reasons. The major one is to help third-party developers to start writing Universal Windows Apps. Doing so will reduce the company’s need to support multiple versions of the client operating system. Right now, Microsoft has four major revisions of Windows in support; these include Windows Vista, Windows 7, Windows 8.1 with Update and Windows 10 itself. Maintaining these different versions of Windows, in the long run, will become a strain even for a company with the resources of Microsoft.

The software firm is already moving forward with its Windows 10 strategy, which is to make the operating system a service. On August 2nd, 2016, the company might launch the next revision of Windows 10, version 1607, otherwise known as the Anniversary Update. An unpublished Microsoft Newscenter article prematurely revealed the date.

The article was empty, and the headline has since been pulled. So this could be the date, or perhaps not. Hopefully, we’ll get an official confirmation from Microsoft soon.

Version 1607 includes many fit and finish refinements with greater enterprise enhancements such as support for the BASH Command Shell. The update also expands on its inking features with a new Windows Ink Workspace and Cortana support for Microsoft Office. Microsoft’s new web browser Edge and some welcome updates such as support for extensions and improved performance.

The company released the latest version to Windows Insiders in the Fast ring today — Build 14376.