When Windows 8 was released we called them Metro or Modern apps. Now with Windows 10 they’re Universal apps, so what does that mean anyway?

If you thought Windows 8 was revolutionary when it came to market in 2012, the successor to that ill-fated release, Windows 10, is even more dramatic. Not in a mind-boggling way, but through seamless experiences promising to make it an exciting platform to develop for among several devices. We touched on Universal Apps in a previous article, focusing on its desktop improvements. With the introduction of Windows 10, Microsoft has evolved the philosophy of the modern app into, the Universal App model. Universal, being a key selling point of this new era, in the Windows app development platform.

Note: In typical Microsoft-style of renaming its products, they are technically referred to as Universal Windows Platform apps or UWP, but we’ll just go with Universal apps in this article.

Values and Benefits of the Universal App Model

For the past 25 years, Windows built its success on the WIN32 app model. Users have experienced tremendous value, from the many hundreds of thousands of apps, developed for the platform. Today, that model is slowly eroding because of the power of mobility, pioneered by smartphones over the past 10 years. Universal apps mean several things to both developers and end users.

It’s the opportunity to reduce the time it takes to bring solutions to market by reusing development code and have it adapt across screens with minimal effort. As part of the vision of Microsoft’s OneCore, which is the foundation of Windows 10 across multiple solutions such as Desktop, Server, Mobile and technology like HoloLens, it ultimately means, an app developed for Windows 10 mobile, can quickly adapt to whatever Windows 10 device you use it on. Providing the right experiences, such as user controls, layout and access to services such as OneDrive and Cortana.

Continuum and the Universal App

Universal apps for end users realizes new experiences that provide, a no compromise solution regardless of device or form factor. The most significant example is Continuum, introduced as part of the wave of Windows 10 mobile devices, such as the current flagship Lumia 950 or 950 XL phones. With Continuum, users can connect a Windows 10 Mobile device to a docking station then transform 4.7 inches into Full-screen high-resolution apps, offering an even richer set of tools, which can take advantage of traditional input devices if needed. Continuum will be like having a PC in your pocket. It’s the path to convergence that other platforms such as Canonical’s Ubuntu, have been trying to accomplish for years.

Microsoft is the first vendor so far, to produce a working solution to market. The issue of building the ecosystem remains a critical barrier to success. Compatible solutions will need to be available, to take advantage of Continuum. Daily Motion, a popular on-demand video platform is a perfect example of the power of the Universal App Model. Dynamically providing an environment, that quickly provides the right experiences for the right device. 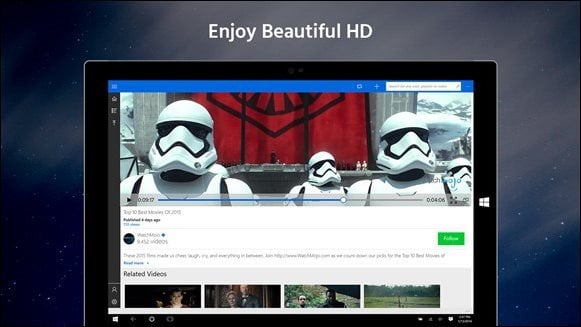 What Microsoft is envisioning, is one device to rule them all.  A few years ago, it was about the three screens; mobile, desktop, and television. The Universal App Model promises to consolidate that to one device. The ecosystem needs to be there, though. With Microsoft’s current lack lustre performance in the mobile market, there isn’t a high demand in the consumer market for these advances, at least not yet.

It will require investment in new devices such as the Microsoft Lumia 950 series, in addition to hardware that can support it such as, the Docking station, which seems unlikely to be available everywhere or convenient. One possible solution to this complexity is Microsoft’s new Remote Desktop app, which supports Continuum. Again, this adds a new complication to supporting technology, which looks more like a business driven idea, than a mass market solution.

Universal apps mean is that you can build an app for a smartphone and it will work on a tablet and desktop/laptop PC, Xbox One, or vice versa.