Microsoft is expected to start delivering Windows 10 as a recommended update in 2016, until then, here’s how to disable the GWX notification from your PC.

Since May 2015, Microsoft has been pushing out the Get Windows 10 app or what is known as the GWX app. If you want to upgrade, it’s a useful tool in determining if your PC can run Windows 10 and prepare it for the upgrade. But if you’re not upgrading, you probably don’t like seeing the Get Windows 10 notification all day.

We previously showed you how to get rid of the annoying Windows 10 upgrade notification. However, Microsoft has been getting more aggressive in pushing the new version of Windows and at times upgrading PCs without permission. In a perfect world, Microsoft would have every computer running Windows 10, but the reality is, that isn’t going to happen. Windows 7 and Windows 8.1 with Update 1 are still supported, and many users are comfortable with their current version.

Banish the Get Windows 10 Notification for Good

Removing the GWX has turned out to be quite the “whack a mole” experience for many. Microsoft is using its Windows Update service to deliver the GWX app over and over. Even when you think you have removed the appropriate KB Updates, it still keeps coming back. Thankfully, someone has taken it upon themselves to stop GWX once and for all. Microsoft is expected to start delivering Windows 10 as a recommended update in 2016, until then, here is how you can put a stop to it.

The GWX Control Panel is a free third-party utility developed to stop Microsoft’s Get Windows 10 app for you. In addition to disabling GWX, the following functions are included:

The GWX Control Panel interface is packed with information and settings. The app detects if the Get Windows 10 app is enabled. It also checks if GWX files have been downloaded or if your settings are configured to install the Windows 10 Upgrade. 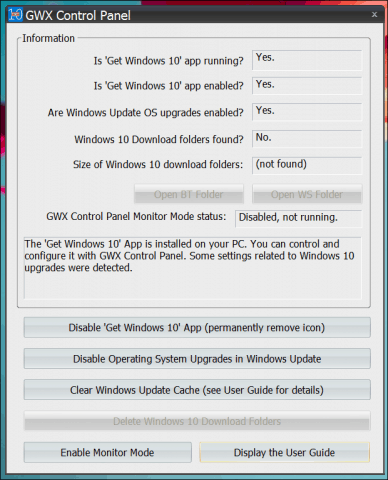 If you don’t want the Get Windows 10 app to make any changes to your system, click Disable ‘Get Windows 10’ App (permanently remove icon) and Disable Operating System Upgrades in Windows Update. That’s it! You no longer have to worry about upgrading to the latest version of Windows.

To further reassure you, the latest version of GWX Control Panel includes a monitor mode you can use to check for new KB updates or system-related changes that might be associated with the Get Windows 10 app. You can quickly access it from the Notification Area.

So what if you eventually decide to upgrade to Windows 10, especially before the July 2016 deadline? The Media Creation Tool can be used to initiate the upgrade; we have detailed how you can use it to perform an upgrade from previous versions of Windows.