Microsoft today announced new extensions that are coming to its Edge in Windows 10. The announcement came during its annual Build developer conference.

Microsoft today announced several new extensions that are coming to its Edge web browser in Windows 10. The announcement came during its annual Build developer conference. 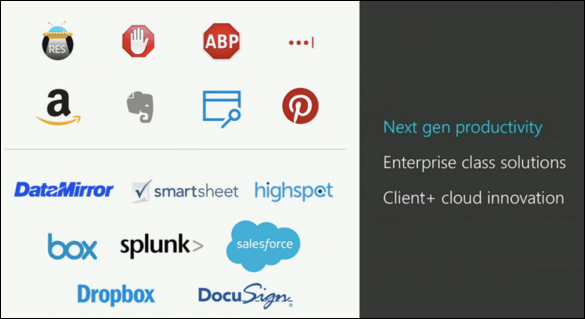 Some of the new extensions include major services like LastPass, Adblock Plus, Amazon, Evernote, and others.

Two weeks ago Microsoft released Windows 10 Redstone Preview Build 14291 to Windows Insiders which includes support for Edge extensions. At the time, there were only a few available, but that is about to change.

When Windows 10 was first released last year, the lack of extension support is the most important feature missing from the newly revamped browser.

We initially expected Microsoft Edge to have extension support by the end of last year, but it was delayed. If you’re a member of the Windows Insider Program for Windows 10, you can start testing out extensions in Edge now.

However, you can expect to see extension support for Edge and a lot more improvements that are coming later this year in the next major update.

The next major Windows 10 update, currently named “Redstone”, is expected to roll out to everyone this summer. It will be free to everyone who has Windows 10 installed and will be called the Anniversary Update.