Microsoft is pushing hard to get you to upgrade to Windows 10 before the July 29th deadline. It’s causing a lot of anger and dissatisfaction among PC users.

Microsoft’s push to get users to upgrade from older versions of Windows to the company’s flagship Windows 10 has reached new heights of desperation. We have been covering solutions that give users a choice about how to manage their computers. At the end of the day, upgrading to Windows 10 is a personal decision; it is your computer, you bought it, and know what does and doesn’t work on it. The software firm’s July 29th deadline to end free upgrades is fast approaching, but users complain about a recently added forced upgrade policy. It’s causing a lot of anger and dissatisfaction among PC users.

To give you an idea of how severe the issue has become, here are some quotes from disgruntled users on the Microsoft Community forums:

I hear and witnessed computers at doctors that are not suitable for upgrades to automatically upgrade to 10 version. This is infringement on personal possession . What is your answer to that and how will you fix this outrage. There could be a class act lawsuit waiting. We as costumers have to find workarounds to prevent this from happening.???? Really .Get your act together… soon plz Source

Thanks to Microsoft installing a new operating system without asking my permission.

If I wanted such treatment, I’d buy Apple products.

This is a test of trust and Microsoft failed miserably. Source

Yes, Windows is behaving very badly. Twice it has just hijacked my computer while I was in the middle of things and just started to download windows 10, WITHOUT MY PERMISSION! Twice I had to do a hard shut down to shut it the heck up. This is no way to do things. Source

My computer did the same, just started to download and update without my permission! Beside that, now the computer has a black screen and I can not do nothing with it!

I request a fast support from Microsoft to solve my problem, free of charge! I will contact my lawyer to sue Microsoft, for all the costs and time lost with this action!

This is a total disrespect, for my rights. Source

My oldest computer did this when I left the room. I am planning to replace it soon because of its age and was trying to nurse it to the end of the school year. Now it works horrible. My other computer was destroyed by the Microsoft help desk and I cannot turn it off nor access files. Source

There are thousands of other threads like these appearing across the web. The question everyone keeps asking is, why is this happening all of a sudden? A few months earlier, Microsoft enabled Windows 10 as a recommended update. This change made the free upgrade the ability to install like your regular patches and security updates. However, you could change that by unchecking Recommended Update in Settings.

In early May, the company made further modifications to the Get Windows 10 app. GWX would now have the authority to pick a date when the upgrade would occur without your permission. Once the upgrade wizard takes over, there isn’t much you can do but let it install. 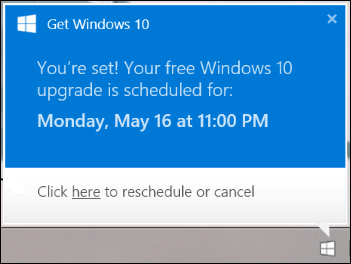 But things are even shadier. Last year, Microsoft started downloading the Windows 10 installer files in the background to your PC. And now, during Microsoft’s final push, when you get the upgrade screen, if you click the X to close the window, you agree to install the update. To get out of that window, you need to click the small “here” link. That’s located under the date and says, “Click here to change upgrade schedule or cancel the scheduled upgrade.” 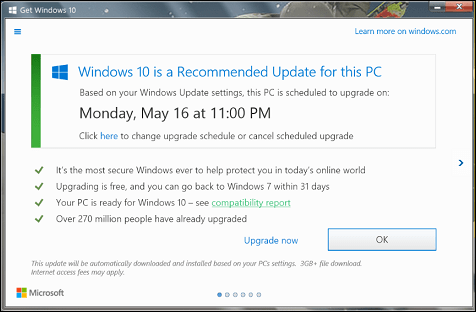 The early warning signs were there, and not all users were savvy enough to know about solutions such as the Never10 app by Steve Gibson, which effectively blocks the update. Microsoft released its own guide, but the reality is, it is often too late for users. The only option after a system is upgraded, you can go back to Windows 7 or 8.1 by rolling back.

However, the Rollback itself is a Pandora’s box, and many users have reported the process can take anywhere from six hours to 1 week as the process would be stuck in an endless loop. Further reports describe Windows 7 or Windows 8.1 system that is inoperable or buggy after the rollback is complete. We’ve also heard data reports missing after the rollback (which is why you must be backing up your data, more on that in the “Final Thoughts” section below).

So How Do I Actually Stop the Upgrade from Happening?

We have covered various solutions for preventing the auto-upgrade; the easiest one is the Never10 app by Steve Gibson. Even Microsoft’s maze approach to canceling the upgrade can be quite complicated and confusing.

I am disappointed by Microsoft’s decision to start forcing the upgrade without consent. Windows 10 is a great operating system, but it’s the strategy Microsoft is using to get it installed. Users depend on their computers for specific needs even outside of mission-critical systems used in a plant or hospital. My brother uses an older version of AutoCAD that is not compatible with Windows 10. He is not willing to purchase a new license just for the sake of the operating system; neither is he interested in trying rollback just because it is an option.

Microsoft needs to realize, distrust amongst users is the last thing the company needs. Creating invasive software is no way to promote an otherwise excellent upgrade. During the Windows 7 product launch, the company described the product as an upgrade designed for you. Windows 10, for all its fancy features, is starting to come across as a market strategy.

There is some good news with all of this, though. If you can hold off the Windows 10 upgrade until July 29th, Microsoft is canceling the automatic upgrade practice. After that time, the Windows 10 upgrade will no longer be free, and you’ll need to purchase it. Of course, you will still get it when you purchase a new PC or tablet. And it has been a year, so everyone who wants to upgrade should have done it already.

Another thing to point out here (that we are constantly preaching) is that everyone needs to keep their data backed up. It’s simple, too. Whether you use the backup tools in Windows or a “set it and forget it” approach to an offsite backup service like CrashPlan. Or, copy your most valuable photos, docs, etc., to a CD or thumb drive. Just Backup!

Don’t get us wrong. Windows 10 is an incredible OS that’s much more secure and provides a plethora of new features with more on the way. The problem is the way the company is going about this last-ditch push.

What’s your take? Leave a comment below and let us know your thoughts on this.

Or, if you need assistance with issues caused by the upgrade, head to our Windows 10 forums for additional help.