In this article, we take a look at the different Windows 10 Stock Keeping Units (SKUs), better known as editions, as well as architectures, and builds.

For many revisions of Windows, Microsoft has provided a variety of editions or what is known as Stock Keeping Units (SKUs) to meet the needs of a variety of users in different markets and regions world. Windows 7 introduced the most editions (Starter, Home Basic, Home Premium, Professional, Ultimate, Enterprise, Embedded). Since Windows 8, many of these editions have been consolidated to more specific devices and form factors.

In addition to SKUs, Microsoft also provides Windows-specific architectures that target the CPU of your PC., i.e., 32 and 64-bit versions. The capability is determined specifically by how much memory your computer can address. The more memory, the more programs you can run and the more tasks you can complete at the same time. Some editions are also designed for computers with additional CPU sockets.

In this article, we look at Windows 10’s SKUs (editions), architectures, and build numbers. Windows 10 is considered to be the last major release of the “Windows” brand. After that, Microsoft will be moving to a more service-oriented model, delivering smaller changes over time when they are ready for Feature Updates. So how will you tell the differences between a version released later this year versus a revision five or 10 years from now? Let’s start by answering some basic questions:

What is a Build Number?

A build number represents a compilation of the operating system code at a particular point in time. For example, Microsoft compiles a new build of Windows 10 every day, and there are many branches and build labs at the company that handles this procedure.

A build number does not determine the quality of the release; this is ultimately dependent on the fit and finish of the code based on engineering a certain feature set and using feedback to help determine the system’s readiness for production. The process is normally called Release to Manufacturing (RTM), where the code, once determined ready for production usage, is delivered to OEMs to preinstall on new computers sold via digital download, USB drives, and yep, still DVDs. With Windows 10. New feature updates are now delivered through Windows Update or using the Windows Upgrade Assistant.

Microsoft compiles new builds each day, so the number goes up. Sometimes build numbers will jump significantly. When a new version of Windows 10 is released, Microsoft will increment the build number with a decimal number (xxxxx.xxx). These are called cumulative updates and contain fixes and features that improve the Windows 10 feature update quality throughout its life cycle.

For instance, Windows 10 Anniversary Update originally started at 11000 series during development but later jumped to 14000 due to significant changes in the codebase. What this really means is, build numbers don’t have much meaning anymore. It’s all about the quality of the code. A number does not determine whether a build is good or not. quality is determined by various factors, which can range from performance, feature readiness, and most importantly, stability.

Starting with Windows 10 November Update, Microsoft changed its versioning system based on a year and month scheme. So instead of seeing the build number, you will see 1709, 1703, 1607, 1511. This is because the original release of Windows 10 was later christened version 1507.

What Does RTM Mean?

RTM, which means Release to Manufacturing, is a milestone in software development. Not specifically relevant to Windows 10, but symbolically in the past, it determined when a build is ready for production environments where it can be deployed and used for everyday computing and preloaded on new computers.

Microsoft has moved to a new system based on software as a service called servicing channels. It’s rather complex and will affect business customers more than end-users. Servicing channels help customers decide when they deploy a new release of Windows 10 in their organization. Here is how Microsoft describes this new delivery system:

With that in mind, Windows 10 offers 3 servicing channels. The Windows Insider Program provides organizations with the opportunity to test and provide feedback on features that will be shipped in the next feature update. The Semi-Annual Channel provides new functionality with twice-per-year feature update releases. Organizations can choose when to deploy updates from the Semi-Annual Channel. The Long Term Servicing Channel, which is designed to be used only for specialized devices (which typically don’t run Office) such as those that control medical equipment or ATM machines, receives new feature releases about every three years. For details about the versions in each servicing channel, see Windows 10 release information. Source

In older versions of Windows, you were able to know the edition of Windows installed from several places (startup splash screen, welcome screen, About Windows dialog). However, as Microsoft moves to the concept of “one Windows” or Windows as a Service (WaaS), the edition takes a back seat to what you have installed. But, of course, it is still important to know what edition you have installed, whether for support; or to compare with other editions available, especially if you want to upgrade to a higher edition with more features and capabilities.

To find your version of Windows 10, hit Windows key+R and type: winver, and hit Enter. That will bring up the following About Windows screen where you can see the version and build number. The modern way to check your version is from within the Settings app. Click Start > Settings > System > About 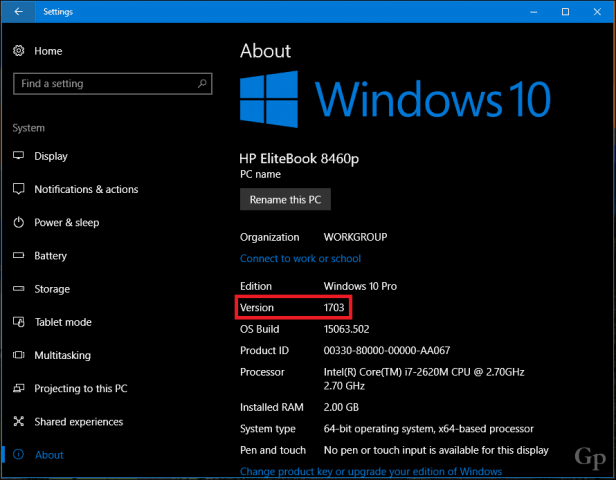 And here is what versions you can expect if you’re upgrading Windows 8.1:

What’s the Difference Between Home and Pro Versions?

It turns Windows 10 is a large family of editions, but the two editions users will be most exposed to are Home and Pro. In addition, Microsoft has expanded the brand to include specialized editions you can learn more about below.

Windows 10 Pro is the premium business edition that supports advanced capabilities such as multi-processor support, more than 512 GB of RAM, Domain Join, Network Backup, Group Policy, Remote Desktop, and Hyper-V. It is the logical successor to Windows 7 Professional, Windows 7 Ultimate, Windows 8/8.1 Pro. The dialog boxes below indicate this edition of Windows 10 can be joined to a Windows Server domain; check out our article for more instructions on doing so.

Note: If you want to learn more about which edition might be right for you, check out our articles for choosing the best edition and architecture.

Windows 10 S is a new edition for next-generation devices, focusing exclusively on universal apps. Microsoft calls it the heart of Windows. Based on Windows 10 Pro, Windows 10 S lacks some capabilities to find its sibling, such as the ability to join a traditional Windows Server Active Directory or run command-line apps. Because of these restrictions, Windows 10 S is significantly more secure.

Universal apps, also known as Modern apps, can only be downloaded from Windows Store. They are vetted and tested, unlike classic desktop applications. The unfortunate reality, many popular desktop apps like Adobe Photoshop, Google Chrome, or Mozilla Firefox cannot run on Windows 10 S. Microsoft makes it easy for customers who purchase a new computer preinstalled with Windows 10 S to upgrade to Windows 10 Pro if they need classic apps.

Windows 10 Pro Education is another variant of Windows 10 Pro for students in schools. It’s what you would call a managed client and includes restrictions to make it suitable for educators who don’t want distractions that can interfere with student learning. Features such as the following are disabled but can be enabled at any time in Group Policy: Cortana digital assistant, tips, tricks, and suggestions, Windows Store suggestions. Windows 10 Pro Education can only be acquired through Microsoft Volume Licensing programs.

Windows 10 Education was first introduced with the launch of Windows 10. A variant of Microsoft’s large organization-focused Enterprise edition; Education targets complex academic environments such as colleges, universities, and some schools. Much of the differences are on the manageability side, with deeper security options: App Locker, Application Virtualization, Device and Credential Guard, Direct Access, and Branch Cache. Features such as the following are also disabled in Education but can be enabled at any time in Group Policy: Cortana digital assistant, tips, tricks, and suggestions, Windows Store suggestions.

Windows 10 Enterprise is Microsoft’s premium business edition available within its volume license programs. This edition includes all the features of Education and Pro but lets System and Network Administrators restrict access to certain features such as the Windows Store and other consumer experiences.

Windows 10 Team is another variant of Windows 10 Enterprise designed for large-screen devices. It removes many of the desktop feature found in the client and geared towards scenarios where touch input is important. Windows 10 Team can only be found on specialized devices such as Microsoft’s Surface Hub, including a 55 or 84-inch screen. Windows 10 Team on Surface Hub is practical for organizations with meeting rooms where presentations are given, brainstorming, and teleconferencing.

Windows 10 for IoT was previously branded as Embedded in earlier versions of Windows. IoT stands for Internet of Things, which means internet-connected devices. These are usually non-traditional PC devices such as a watch, appliances such as a refrigerator, stove, or microwave. Windows 10 for IoT is available in both a Core and Enterprise edition. If you like to build, tinker, and know-how something works, IoT Core lets you do that. IoT Enterprise adds the manageability and security options an organization might need.

Find Detailed Information About the Edition

At the command prompt, type: slmgr.vbs -dli and hit Enter.

A dialog will appear listing the full name of the edition. Another interesting thing this dialog display is the channel the operating system is from, whether it is OEM, Retail, Volume License Client. 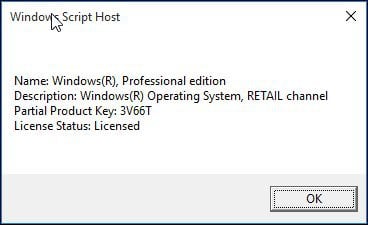 What is a Channel?

Windows 10 is available in both 32 and 64-bit architectures. What this basically means is the amount of memory your computer is capable of addressing. Some computers might be 64-bit capable but are limited by the amount of memory that can be installed. For example, windows 10 Home 64-bit supports up to 128 GB of RAM, while Windows 10 Pro, Pro Edu, Education, and Enterprise 64-bit support up to 2 TBs of RAM, Pro for Workstation can use up to 6 TBs.

The 32-bit versions are limited to 4 GB of RAM. Home is limited to a single CPU; S, Pro, Pro Edu, Education, Enterprise can go up to 2 sockets; while Pro for Workstation goes up to 4 sockets.  If you buy a modern PC today, more than likely, it includes a 64-bit CPU.

To determine the architecture of your current system running Window 10, go to Settings > System > About. You will find the system type in the right column. 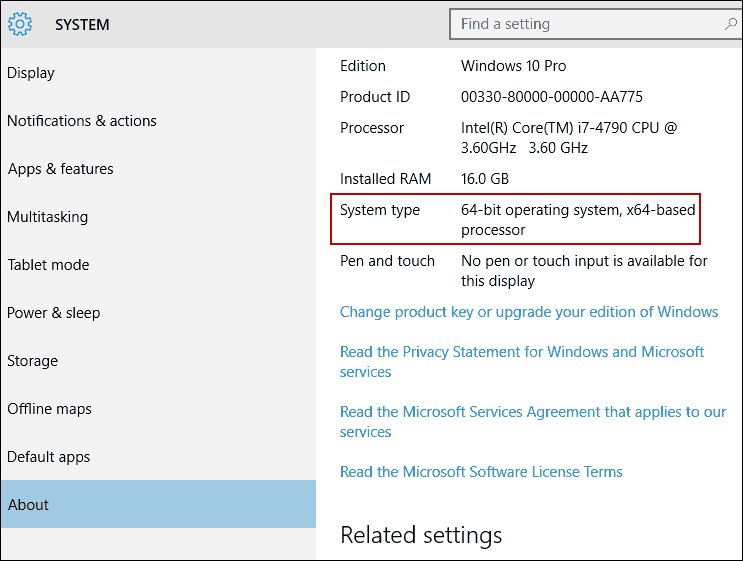 For more, please read our article: How to Switch from Windows 32-bit to 64-bit.

As previously noted, Windows 10 represents the last major revision. Prior versions of Windows came to market every two or three years, and Microsoft changed that with Windows 10. As a result, windows will no longer have identifiable version numbers such as Windows 11 or Windows 12. And with the introduction of the Windows Insider Program for PC and the Insider program for Windows 10 Mobile, Microsoft promises to continue rapidly developing Windows 10. What this means for you, to better identify a release of Windows 10, the build number will be the best place to look.

Hopefully, this should help you grasp the basics of where Microsoft is heading by developing WaaS.