Microsoft introduces a new Windows 10 edition called Workstation with features for high end desktop PCs. Find out what it is and whats included. 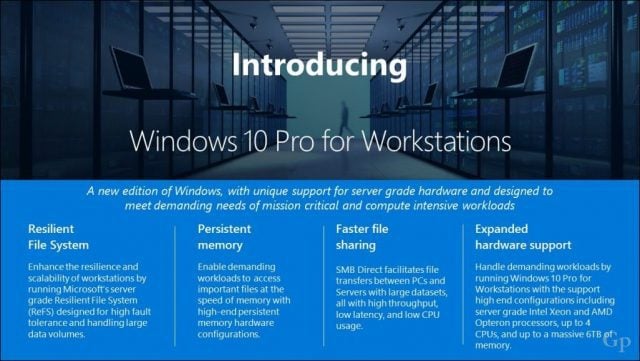 Microsoft is describing Windows 10 Pro for Workstation as the best edition for demanding customers including Rihanna. Windows 10 Pro for Workstation puts emphasis on four critical areas: the Resilient File System (first introduced in Windows 8); persistent memory; faster file sharing through SMB Direct; and support for the latest high-end workstation processors from Intel and AMD. Here is what Microsoft had to say about each in detail:

The value of Windows 10 Pro for Workstations is directly aligned to increase the performance and reliability of high-end PCs, with the following features:

It really does trigger the question, why these features; couldn’t they just add these unique features to existing premium business editions. That said, Microsoft somehow found a niche, one big enough to warrant splitting out a new product. The memory limit is particularly impressive, up from the current 2 TB in Pro and Enterprise to 6 TBs – that’s insane!

Microsoft doesn’t mention any consumer-based customers; this, for now, seems to be for organizations that are using systems with a special class of components that may be in the areas of animation, life sciences, video production and your traditional number cruncher and IT Pro.

Even if you own a workstation class system at home (I do), Microsoft is not detailing its availability or pricing yet; beyond fall and being a part of the next release of Windows 10, version 1709. Even now, there are some editions that are out of the general public’s eye like Windows 10 Pro Edu, Enterprise E3, and E5. Windows 10 Pro for Workstation might follow a similar trend.

Let us know what you think—is this new edition justified or is Microsoft taking it too far?