Fubo TV is an over the top streaming service with a heavy focus on sports and includes tons of entertainment channels as well.

When it comes to cord cutting, one of the questions most often asked is how to get sports. There is a multitude of answers. You can add sports bundles to a la carte services like Sling TV, subscribe to services for major leagues for NBA, NHL, or for NFL coverage, or use an OTA antenna to get local team coverage. But one up and coming streaming service, Fubo TV, emphasizes sports coverage and includes traditional cable channels, too.

Fubo TV is an Over-the-Top (OTT) streaming service and works similar to other live TV streaming services such as PlayStation Vue, Hulu Live, and DirecTV Now. While the primary focus is sports, it also includes live programs from channels like FX, CNN, AMC, USA, and many others. It offers local affiliates like CBS, NBC, and Fox in select markets and includes on-demand shows from those networks nationwide.

The Fubo Premier service has over 70 channels and more seem to be coming all the time. I have been reviewing it for the past few months and started with 65 channels and that has increased in just the past couple weeks. When it comes to American football, one of the big channels included in the lineup is NFL Network. While it has more sports channels that aren’t available versus other OTT services, one glaring omission from the lineup is ESPN. The other major streaming TV services do offer ESPN in their lowest tiers. 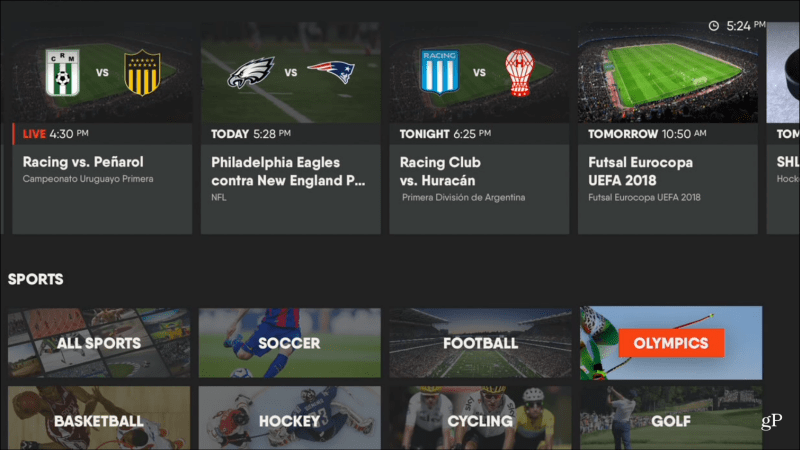 The interface on virtually all platforms (mobile, online, set-top boxes) has been improved over the past couple of months. I first started to dive into the service last year, and since then, there has been a dizzying amount of upgrades. The experience is virtually identical on all platforms now. Everything is broken down into categories and subcategories. For example, you can just look in the Sports section and narrow it down to Soccer, Basketball, Golf, and more. And, yes, it does include a grid guide — just like your cable provider. 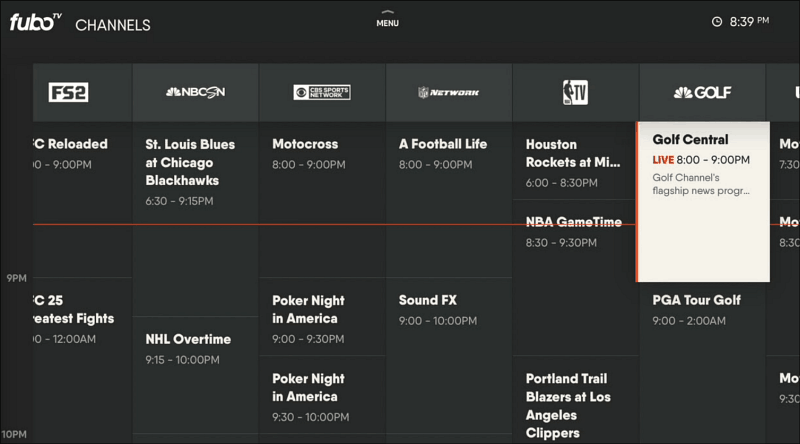 The Fubo TV Premier service offers a cloud DVR which other OTT services don’t offer or haven’t quite mastered. You get 30 hours of cloud-DVR with your subscription and if that isn’t enough, you can upgrade to 500 hours for an additional $9.99/month. It even has a cool 72-hour lookback feature that lets you replay a game you forgot to record. Recording shows or sporting events couldn’t be easier. Launch the schedule and select what you want to watch and hit the Record option. 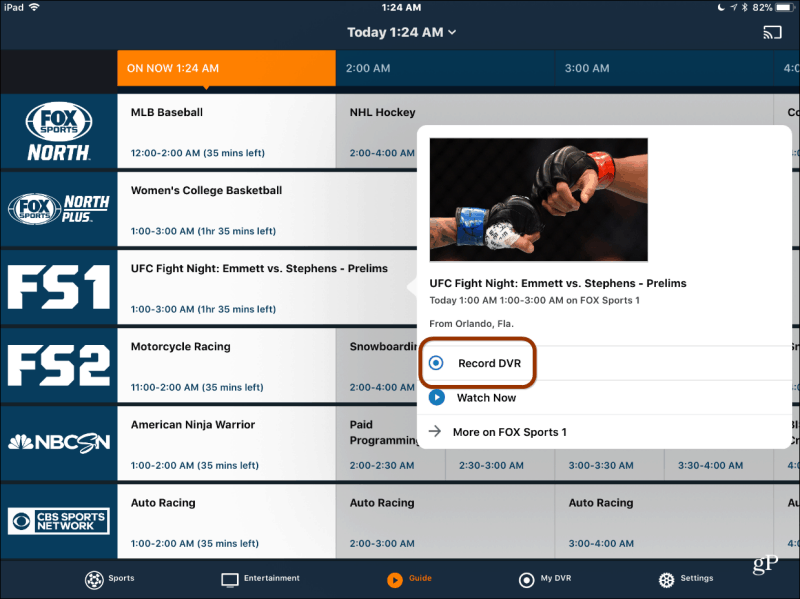 Recording from the Fubo TV web interface is even easier as you just click the Record icon from the guide view. I found this to be the best way to make sure I didn’t miss an event during the week. After a show has been recorded it sits in the “My Videos” section where it’s easy to watch the event and delete what you no longer need. It will also display how much of your cloud DVR space is left which makes it easy to manage. 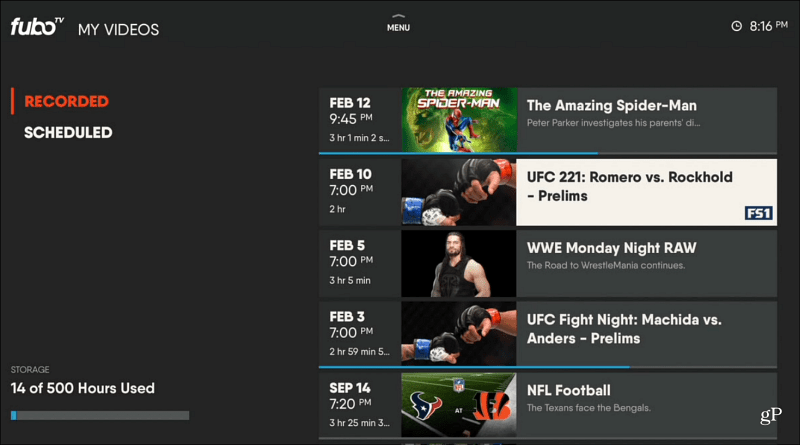 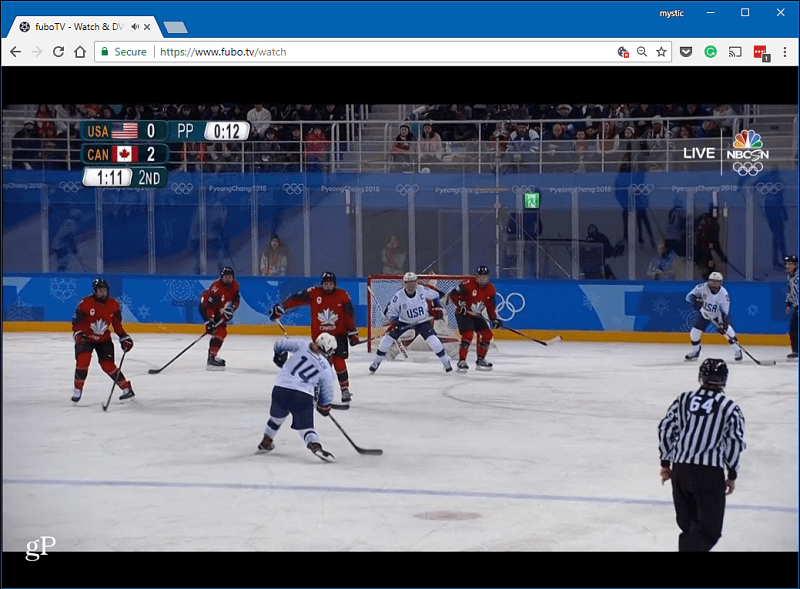 The picture quality was consistent while watching other sporting events and TV shows and movies. Of course, your picture quality mileage will vary since there are so many variables like connection speed, Wi-Fi vs Hardwired, local network load, a streaming device you’re watching and whether the platform is up-to-date…etc.

It works on most streaming devices and platforms including your web browser, iOS, Andoird, Chromecast, Fire TV, Apple TV, and Roku. Since the UI improvements, the navigation is nearly the same on each one which makes it easy to manage your content between devices. It also allows you to pick up where you left off when watching an event. 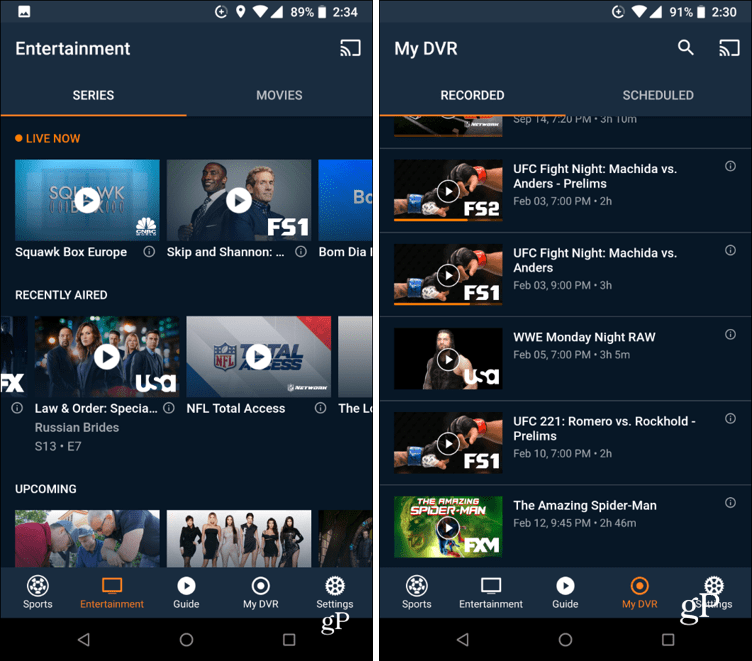 Since the UI upgrades across the board, and the addition of more channels, Fubo TV is a real contender with other services like PlayStation Vue and Sling TV. Navigation is straightforward and finding what you want to watch or record is a piece of cake. If you’ve been considering becoming a cord cutter, but the idea of not getting live sports has held you back, even without ESPN, you’ll want to give Fubo TV a shot. You can start with a free seven-day trial, and get the first month for $19.99 and is $44.99 after that.