Netflix is fast becoming the King of streaming video and the killer of traditional cable. We’ll show you how to dive in and get started with Netflix’s best features and more.

Twenty years ago, you had to buy an expensive monthly cable deal if you wanted an “all-you-can-watch” TV show and movie package. These packages cost hundreds of dollars, but there was no competition. You could either hoof it on down to Blockbuster Video or get a second mortgage and put your firstborn up as collateral to pay for that on-demand cable or satellite package. The cable companies had everyone by the short hairs, and they knew it.

But then the Internet happened and with it eventually came streaming video. Now, services like Netflix, Hulu, and Amazon Prime are destroying the cable TV company’s stranglehold on our entertainment choices. That’s a good thing because it means lower prices and more choices for those who choose to cut the cord.

Netflix is more than just streaming TV shows and movies to you. They are an entertainment production company in its own right, making top-quality TV shows and movies of its own. These Netflix Original series are attracting top-tier actors and actresses. My only complaint is that they are focusing too much on superhero productions.

Netflix also partners with other companies to bring out new TV show episodes every week. For example, Paramount Plus (formerly CBS All-Access) made the new Star Trek: Discovery, but each new episode also appeared on Netflix every Monday. Currently, Black Lightning and Designated Survivor are being serialized weekly.

Besides the original content, there are other benefits of streaming via Netflix:

Everything You Need To Know To Get Started On Netflix

So you’re ready to ditch traditional TV and go Netflix”n? A wise choice. Let’s get started.

First, you obviously have to sign up for an account. All new customers get the first 30 days free of charge, so you lose nothing if you discover you don’t like it. You can also cancel or downgrade your plan at any time. You are not locked into any binding expensive contracts.

Head to Netflix.com and click Join Free For a Month, which will ask you to choose your plan. Since I am in Germany, it is giving me the Euro prices, but the US prices are pretty much the same. 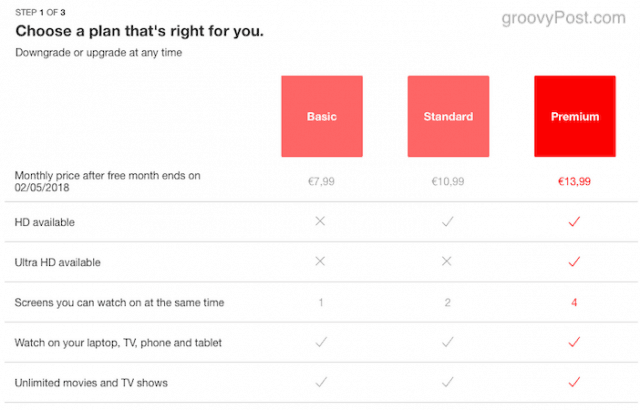 As you can see, the benefit of paying more is better picture quality and more screens. The last one requires some explanation.

When you are watching Netflix on one screen, someone else with your login details cannot log in and watch something on a different screen at the same time. For example, if you are watching a show in the family room, your kid can’t start watching a different show on his tablet.  Netflix will detect two simultaneous logins and stop the second person from getting in. To allow simultaneous viewing, you have to pay for more screens. The maximum is four, and each one has its own profile, its own recommendations, its own watchlist, etc. With me, I have one, my wife has one, my brother-in-law has the third, and my father-in-law the fourth.

As well as allowing everyone to log in whenever they want, it also doesn’t mess up the Recommendations, as everyone will have different viewing tastes. The other day I didn’t appreciate being told I should watch SpongeBob SquarePants, for example.

Fill out the rest of the account details, and your free thirty days will start.

As I just said, the more screens you have, the more profiles there are. So when you upgrade to an extra screen, whoever takes that screen can put their name on the profile and click there when logging in. We covered how to manage Netflix user profiles before, but here’s a short recap: 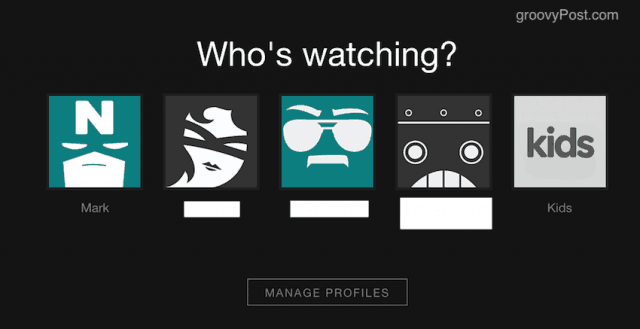 Mine are all being used as I am on the Premium plan. But if one was available, you would click Manage Profiles then click on the avatar of the profile you want to claim. You then get to the settings. 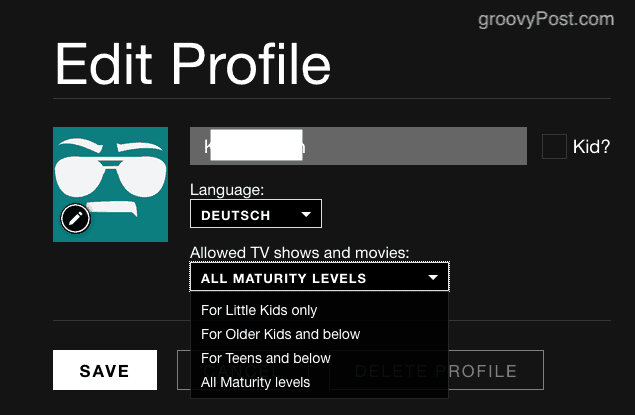 Put the person’s name in the box, choose the interface language, tick the box if they are a child, and choose the Maturity Level. This will determine what shows and movies will be presented on that profile. So your ten-year-old kid will not get Quentin Tarantino, for example. For more details, check out our post on Netflix parental controls.

Now that you have created your account and viewing profile, it’s time to look for things to watch.

One of the important things to remember is that the newest TV shows (with very few exceptions) and movies will not appear here right away. So movies currently playing in the cinema will not be here and likely won’t be until they come out on DVD and Blu-Ray. Netflix’s library of the older content is vast, though, and they are constantly removing and replacing stuff all the time.

The front page will give you suggestions (which will get better when it learns your viewing preferences). You can also see a Trending Now section, as well as Popular On Netflix and New Releases.

Or you can use the search engine at the top of the page.

When you start typing in the search box. it returns results in “real-time”. If you see the one you want, click on it. If it doesn’t have it, it will say at the top Explore Titles Related To…

For example, I was looking for Mission Impossible 5. At the moment, Netflix only has movies up to and including four. But if you look at the top, you will see Explore Titles Relating To Mission Impossible 5. Clicking that won’t get you the movie but instead other titles Netflix considers similar.

For more tips, check out Essential Netflix Tips to Find the Content You Want to Watch.

When you find something you want, mouse over it, and options appear. The red arrow will start playing it on full-screen, the thumbs-up and thumbs-down are to tell Netflix if you liked it or not. That is how it determines recommendations. The “+” icon is to add it to your watchlist. 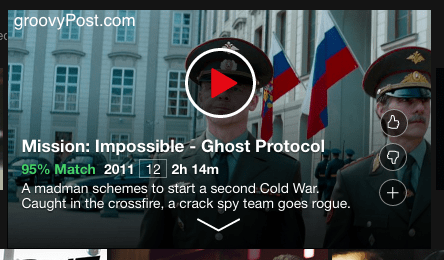 When you have clicked the “+” icon, the “+” will change to a tick. Then look on your watchlist on the main page, and you will see the show or movie. To remove it from your list, click the tick, and it will go back to a “+” again. 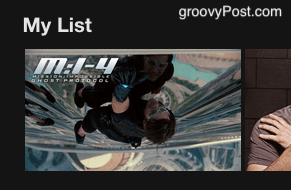 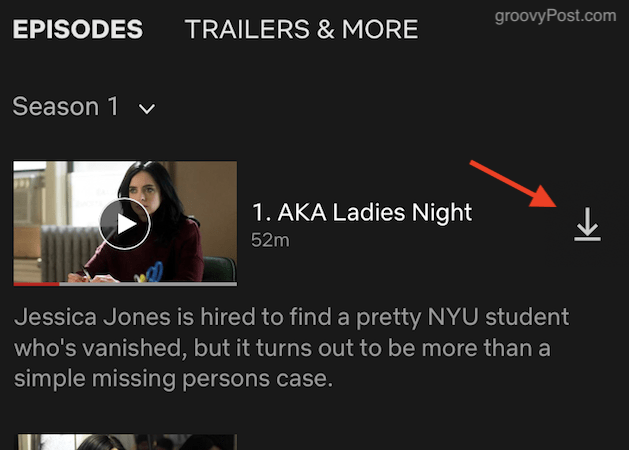 You now have the option of downloading shows and movies to watch Netflix offline. Although the option only seems to be on the smartphone and tablet apps.

Just tap on the downwards arrow on the right-hand side, and the episode will be downloaded to the Netflix app. Obviously, this has to be done before you lose your Internet connection!

Various countries have their own Netflix and their own set of programs. So what is on US Netflix isn’t necessarily on French, for example. Every region has its own licensing deals with Netflix.

Up until recently, you could use a Virtual Private Network (otherwise known as a proxy server) to access another country’s Netflix. However, Netflix got wise to this, and now it blocks all VPNs by default.

Some VPN companies still claim that their product can circumvent Netflix’s geo-blocks, but don’t believe it. I’ve tried virtually all of them, and Netflix blocks every single one.

Netflix starts a “Continue Watching….” list whenever you have partially watched shows and movies on your list. This is a nice convenience if you are in the middle of watching something, as it is at the top of the page. On the PC version of the site, it is slightly further down.

But what if you have abandoned a show or movie part of the way through? How do you get it off that list?

First, go to Viewing Activity. This is basically a log of everything you have watched. Now let’s say I want Comedians In Cars Getting Coffee off the list. Just click the X to the right of the title and remove it from your Netflix list.

It will tell you it can take up to 24 hours for changes to show, but virtually every time, it happens immediately for me.


As well as setting the maturity level on each profile, you can also set a secret PIN code to stop underage viewers from watching mature content. It’s what I call the “Kill-Bill Switch”. 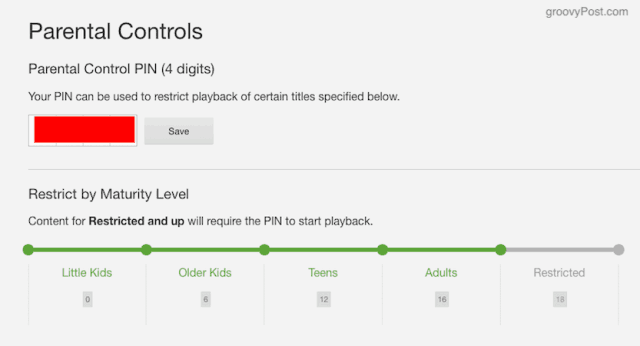 Enter your desired PIN and click “Save”. Then on the “Restrict by Maturity Level”, click on the level which will require the PIN code to be entered. Right now, only “Restricted” stuff requires the PIN on my account. But you may want to lower it to all adult material.

A Look At The Kid’s Channel

If you have a young kid, you obviously want to keep them away from violent or sexually suggestive content. That is where the Netflix Kid’s Channel comes in. 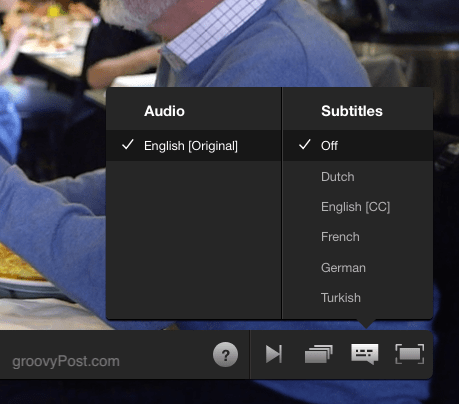 When a show is on, moving your mouse will bring up the playing bar at the bottom of the screen. On the right, there are options.

The second on the right (the speech bubble) is your language and subtitle options. In the audio section, in this case, it’s only English, but depending on where you live, they may offer the show or movie in your language. The subtitles are always a bit more varied, though, and there is English for the hard of hearing.

Netflix On Your Smartphone & Tablet 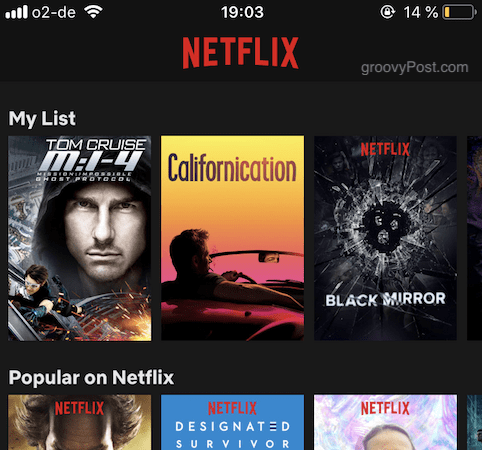 In my humble opinion, Netflix is far superior on a smartphone or tablet. Not only do you have offline downloading, but it is much more comfortable to hold a phone or a tablet instead of a laptop.

The Android version of the app is here, and the iOS version is here. These apps are free and highly recommended.

I only discovered this recently, but you can request a certain TV show or movie which is currently not on Netflix.

Obviously, there are no guarantees as it all depends on a variety of factors, such as another company holding the legal rights, but you might have some amazing luck.

Netflix is quite simply hands-down the best video streaming service there is. With its original programming, constant changing of movies, and ease of use, it consistently beats its rivals.

Why haven’t you tried Netflix yet? Tell us your reasons in the comments.