Windows 10 display an expiration date of October 1, 2016. Microsoft’s Dona Sarkar confirmed the next build will be released before the expiration takes effect.

Unlike commercial builds of Windows 10 released to market, fit for production use, Insider Builds are purposely time bombed. A time bomb does not necessarily affect product activation since commercial builds can switch to the Insider channel at any time and start testing future releases. The expiration possibly exists for security reasons, since Microsoft does not issue updates and patches for the older preview build once it is commercially released.

The release to market build of Windows 10 Anniversary Update will be available on August 2. The update includes many users facing improvements such as Extensions in Microsoft Edge, Windows Ink Workspace, Windows Subsystem for Linux, and Cortana enhancements. Microsoft has also improved the product activation experience. For users who often make hardware modifications, Windows 10 Anniversary Update will make it easier to reactivate. This will be done by linking your Microsoft Account to your Windows 10 installation. 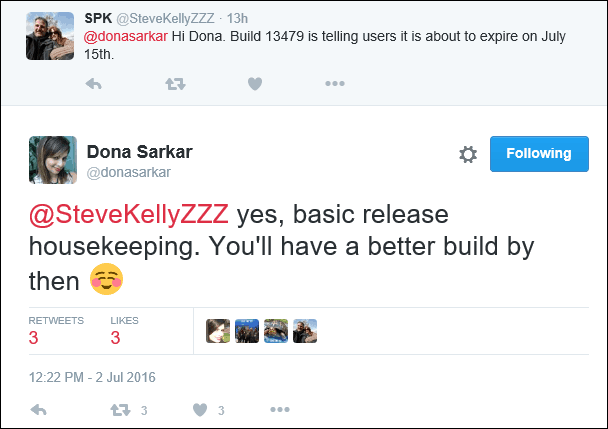 Computers upgraded from previous versions of Windows 10 receive a Digital License formerly known as the Digital Entitlement. The activation process in Windows 10 captures a unique signature of the computer hardware, which is then stored on Microsoft Activation Servers. This eliminates the need to know your product key if you ever need to reinstall Windows 10 in the future. All the user needs to do is download Windows 10, perform a new install, and it will automatically reactivate.