Microsoft announced this week that it’s (finally) rolling out the Windows 10 Mobile upgrade for Windows Phone 8.1, but it’s not available for all models yet.

Windows Phone users have been anxiously waiting for the official Windows 10 Mobile upgrade to be rolled out for Windows Phone 8.1. Microsoft announced this week that it’s (finally) rolling it out, but there’s a caveat, it’s not available for all Windows Phone models yet.

Note: At the time of this writing only select models of Windows Phone can be upgraded to Windows 10 Mobile. According to Microsoft they include:

Of course, before starting any of this, just like with any device upgrade, make sure you have your data backed up in the event something goes wrong.

Make sure to have at least 1.4 GB or more local storage space (not your SD card).

Keep your phone plugged into a power source and connected to Wi-Fi throughout the upgrade process. For this article, I’m using a Lumia 640.

Upgrading to Windows 10 is a bit different than checking for updates. First, you’ll need to install the UpdateAdvisor app on your handset. We covered this app previously in our article: Prepare Your Windows Phone for the Windows 10 Mobile Upgrade.

Launch the app and just follow the onscreen instructions. 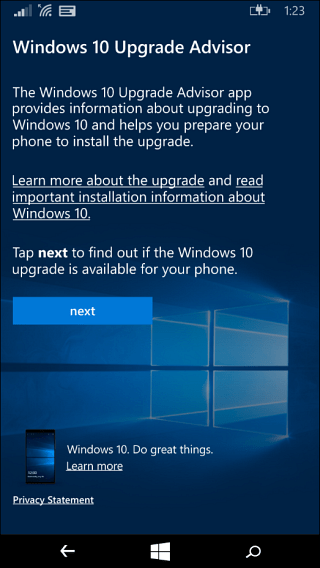 If the update is available for your device, you’ll see the following screenshot. 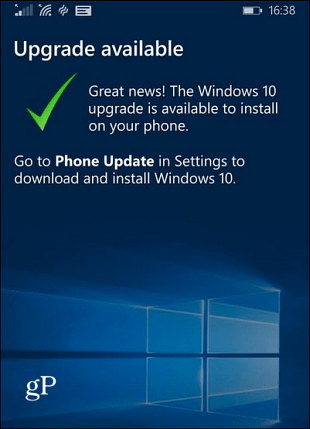 Click the Done button and then go to Settings > Phone Update and grab the update. The amount of time it takes to complete the upgrade will vary, expect at least an hour. 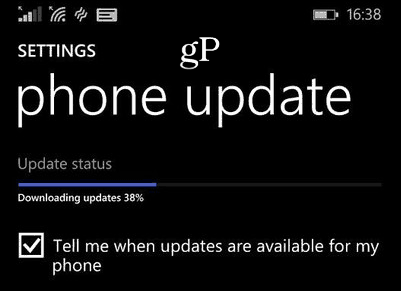 It’s going to vary when the upgrade arrives for everyone depending on your region, phone model, and carrier. If the update isn’t available right away, you’ll see the following screen from Upgrade Advisor, and you’ll get a notification when it is ready. 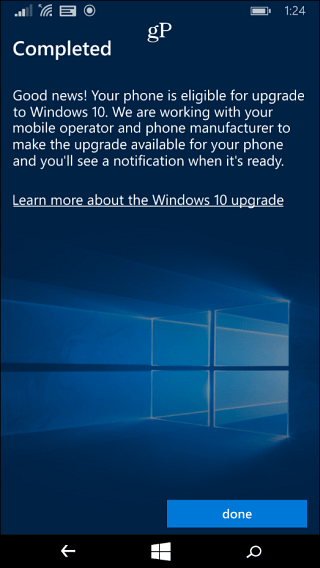 Keep in mind that after the upgrade completes apps like Calendar, OneDrive, Groove Music, and others will need to update, too. 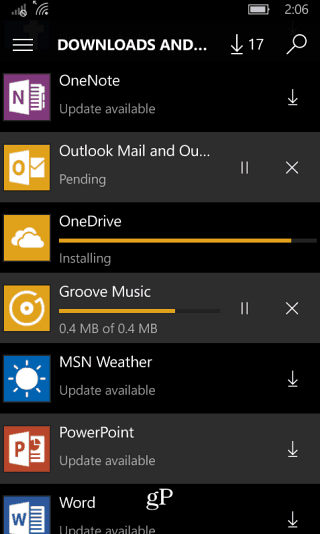 If you don’t want to wait for it to come your way, you might consider joining the Windows 10 Mobile Insider program as you’ll have the same bits as this upgrade provides. However, there’s a lot more involved going that route. If you haven’t been in the Insider program yet, just be patient and wait until it arrives.

It’s also worth noting that Microsoft confirmed via Twitter that phones with 512 MB of RAM will not get the upgrade. Apparently Microsoft wants to upgrade phones with enough hardware power to make the most out of what Windows 10 Mobile has to offer.

However, this seems a bit odd since I’ve been running Windows 10 Mobile Insider builds on a Lumia 635 that only has 512 MB of RAM. So, hopefully, we’ll get further clarification on this from the company…something more than just a tweet.

Also, there will undoubtedly be problems for some people when upgrading their phone to Windows 10 Mobile. If the upgrade isn’t working right, you have questions, or just want to have in-depth conversations about Windows 10 Mobile or Windows Phone, join us in our new and improved Windows 10 Forums.