Microsoft confirmed that Office 2016 will officially start rolling out on September 22nd for Windows. Here’s a look at new features and reasons to upgrade.

The Microsoft Office 2016 release is just around the corner, and we thought it would be a great time to check out what’s new and improved in this release. Microsoft confirmed that Office 2016 would start rolling out on September 22nd.

With each new version of Microsoft Office, it becomes harder to justify the upgrade considering that older versions are sufficient already. It’s not surprising to still see some PCs running Office 2007, released almost 10 years ago. If you maintain an active subscription for people who subscribe to Office 365, you’ll get the free upgrade to the 2016 release at no charge. We previously looked at a couple of the new changes in the suite, such as Outlook Cloud Attachments and the Colorful theme, which adds a vibrant color scheme to each program’s brand identity. A theme can hardly be a justification to upgrade, though, so what else is in there that could push you off that older version?

When Microsoft introduced the Ribbon interface with Office 2007, it was a radical departure to make the suite easier to use. Users were finding it hard to discover and use features that were hidden in the suite.

The Ribbon made discovery and accessibility of features much improved over older versions. Still, it’s hard to find certain functionality or the right tool in the suite for the job at hand. For this, Microsoft introduces Tell Me, which first appeared in its Office Online suite. The Tell Me feature utilizes natural language to find what you are looking for and is supported in all apps in the suite sans Publisher, OneNote, and Skype. 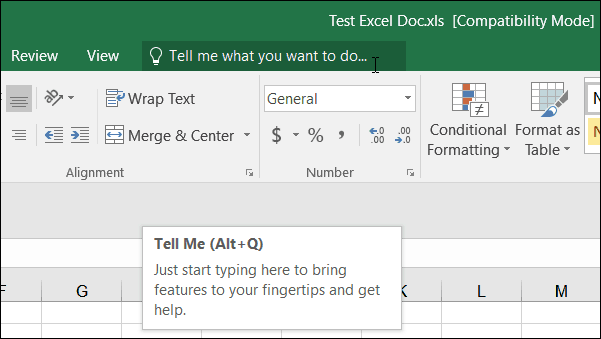 The Tell Me box appears at the top of the Ribbon.

Say you want to protect a file, type it in, presenting appropriate suggestions. You can even immediately access functionality within Tell Me; it’s not just a search results function; it really helps you get things done. 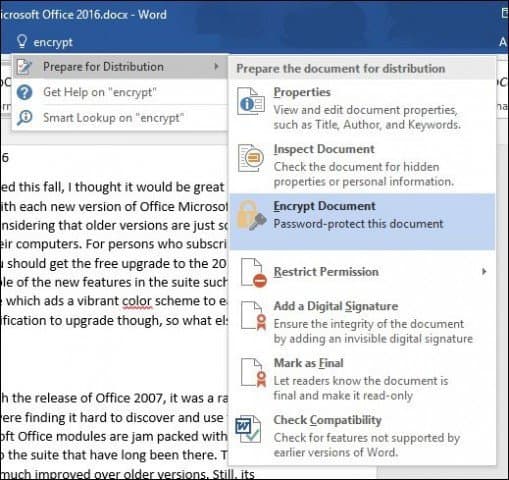 Office 2016 improves the real collaboration features in the suite’s core apps. Word, Excel, and PowerPoint make it easy to work on files with multiple authors, whether they use Office Web Apps or the desktop client. You can easily invite, share and restrict editing through a new Share Task pane. We previously looked at using this feature in our article on how to Track Changes using Word 2016. 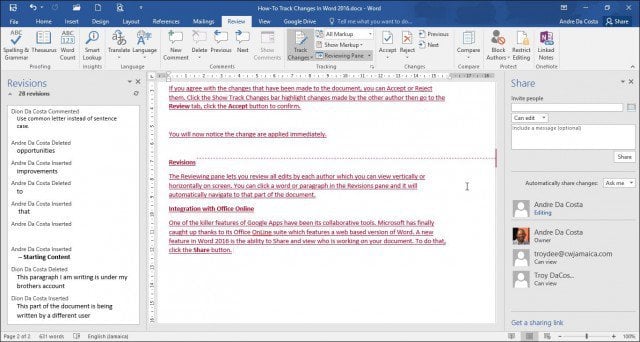 The backstage view was introduced in Office 2010 and has not seen much of an update since. But Office 2016 Backstage adds improvements such as better access to storage locations; you can easily save, open, access documents too. 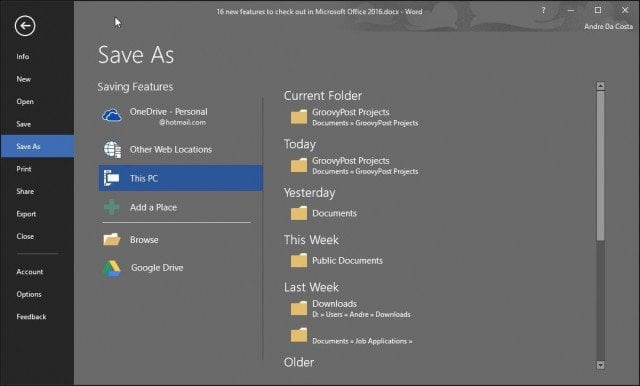 Now you can save time by attaching Office documents from the Ribbon or Action Bar that you most recently used to your emails by picking your document from the dropdown options. For files already in OneDrive, OneDrive for Business, or SharePoint, you have the option to share them as an “Edit” or “View only” link instead of as a traditional attachment. This enables collaboration on one copy of a document instead of several. 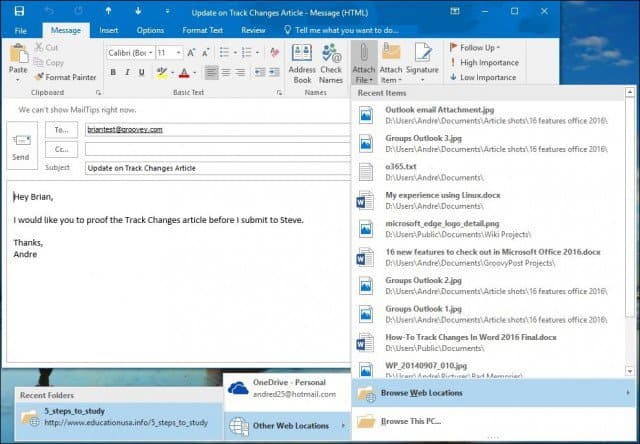 If you have Microsoft 365 (formerly Office 365) deployed in your organization, Outlook 2016 introduces groups that build on the distribution lists communication and collaboration with team members. With Outlook in Office 2016 and enterprise mailboxes, you can do the following: 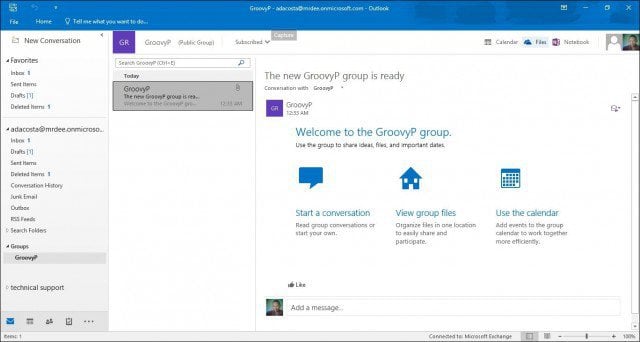 If you use Office on a touch device with a smaller screen, you’ll see improvements to how it handles the layouts better. Just select a message like you would on a Windows Phone device, and when you are finished reading it, tap the Back button. 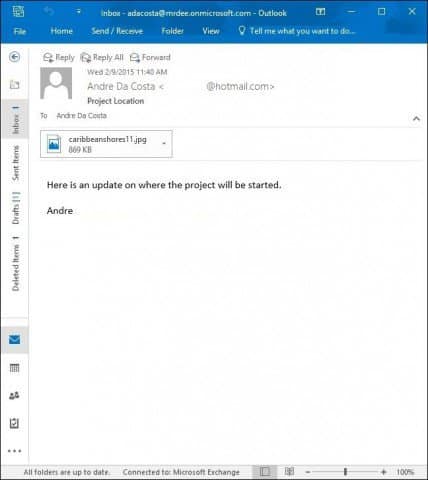 Excel is the perfect business intelligence tool (BI) to use if you work with large data sets. You will be pleased to find that Excel 2016 integrates Power Query into the app, which was only as an add-on before. Power Query provides self-service business intelligence (BI) for Excel featuring an easy-to-use interface that’s powerful enough to dig into many sources, including relational, structured, and semi-structured, OData, Web, Hadoop, Azure Marketplace, and others. 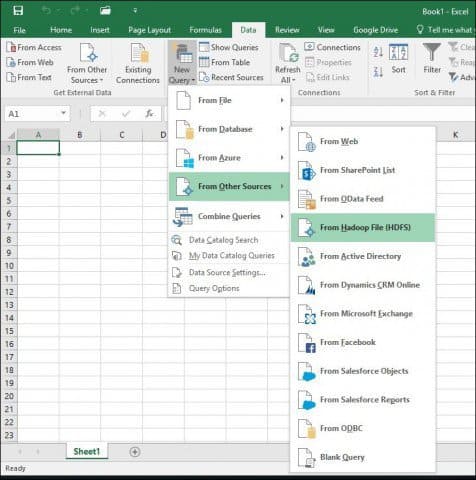 Read Only Mode for Excel

Microsoft improves Excel in Office 2016 with a read-only mode. You can open and view workbooks quickly in SharePoint — removing the need to use the desktop client. 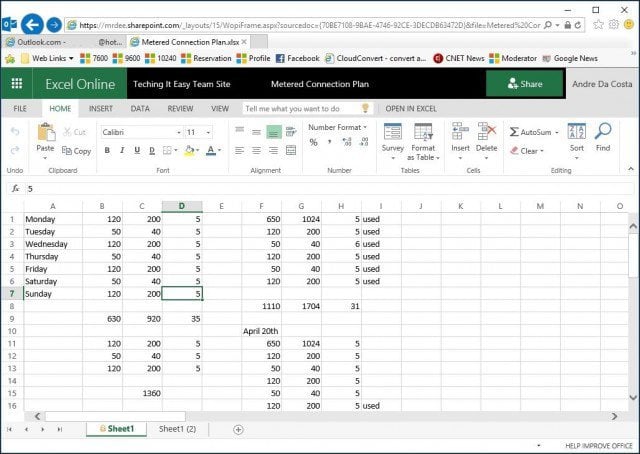 If you are using Office 365 for Business, you will notice a new app included in the Skype for Business suite. The new app replaces the previous Lync communication app providing business users with a robust and familiar brand with the best of Lync. Some of the new features and improvements users can get started with include: 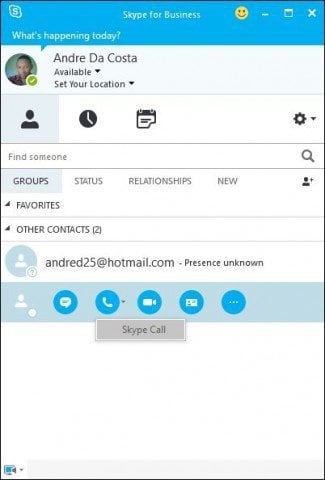 Insert images with the correct orientation: Now, with automatic image rotation, once you insert an image into an app such as Word or PowerPoint, it automatically rotates the picture to match the camera’s orientation. You can manually rotate the image to any position after insertion. Note that this only affects newly inserted images and does not apply to pictures in existing documents.

Pan and zoom while loading large charts/SmartArt: When working with large charts and SmartArt diagrams, the text will appear right away, allowing you to view and edit while the diagrams load. A placeholder for the chart or SmartArt will be displayed until the object fully renders, but you can still interact with the document. 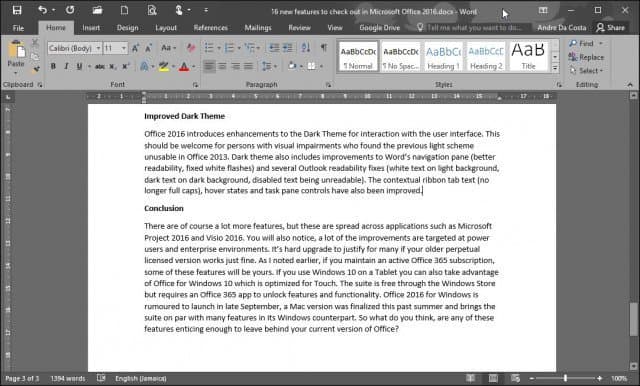 There are many more features, but these are spread across applications such as Microsoft Project 2016 and Visio 2016. You’ll also notice, a lot of the improvements are targeted at power users and enterprise environments. It’s hard to justify an upgrade for many, especially if your older perpetual licensed version works just fine.

As I noted earlier if you maintain an active Office 365 subscription, some of these features in Office 2016 will be yours. If you use Windows 10 on a tablet, you can also optimize the UI for touch.

The suite is free through the Microsoft Store but requires an Office 365 app to unlock features and functionality. Office 2016 for Windows is launching on September 22nd. A version of Office 2016 for Mac and should be released later this fall.

So what do you think, are any of these features enticing enough to leave behind your current version of Office?