Microsoft just released its first update to its new Microsoft Office 2016 for Mac client. Here’s a look at what you can expect from the updates.

Microsoft just released its first update to its new Microsoft Office 2016 for Mac client. This is a bit surprising being that it’s only been a few weeks since it went RTM on July 9th, 2015. Although some may complain about an update so close to its release, I take it as a sign that Microsoft appears to have embraced Lean and Agile application development. Value can now be delivered monthly/weekly/daily vs. its legacy three-year cycles — at least that’s where I hope MS is going. Office as a Service, just like its Office 365 SAAS. 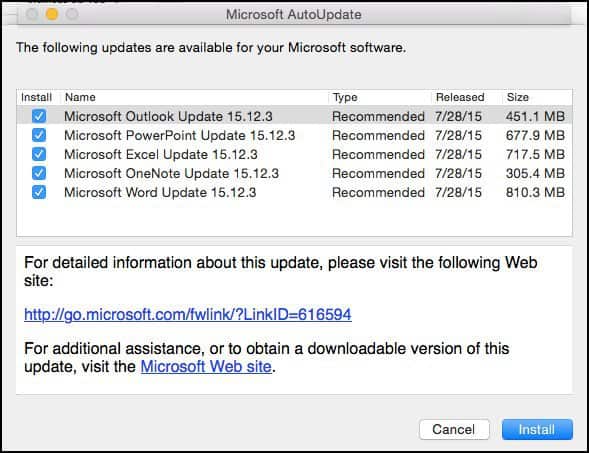 In regards to the update (KB3074482) released today, all the core products including Outlook, Word, Excel, PowerPoint, and OneNote have been upgraded to Version 15.12.3.

The release notes aren’t terribly specific however here’s a breakdown of the fixes and improvements MS published:

Personally, additional Clutter support for Outlook is the update that caught my eye. Clutter is a new service Microsoft released a few months back which leverages its big data platform, Office Graph. Office Graph uses different feeds of information, including your behavior to determine which email is clutter vs. important. It uses machine learning technology to improve over time however you can also train it by marking an email as clutter (or not clutter). My guess is that’s the update they added this month (Right Click an email, Move to Clutter).

This blog post explains the basics however here’s a nice video that reviews the Clutter feature in more detail:

The easiest way to update your Mac is to just use Microsoft Auto Update. Open a Microsoft Office app and click Check for Updates in the Help menu. You can also grab individual updates to each app via the KB3074482 Article Page. Either way, in typical fashion on the Mac, the updates are very large — basically full re-installs of each product. If you have a slow internet pipe it’s going to take some time to finish.