Since its launch in 2015, Microsoft has taken an urgent approach to the service of Windows 10. The Windows 10 Creators Update introduces new changes.

Since its launch in 2015, Microsoft has taken an urgent approach to service Windows 10. The Windows 10 Creators Update introduces new changes to the Windows Update service for select editions of the operating system. This is excellent news for Windows Home Edition, as they are configured by default to download and install every update the software firm releases. The objective is to keep users secure and resolve problems quickly. The Anniversary Update, launched in August 2016, gave Windows 10 Home users more flexibility, with options such as active hours and restart options. This resolved complaints from users regarding forced restarts that can sometimes occur without the user’s consent.

For higher editions of Windows 10 such as Pro, Enterprise, and Education, the Creators Update is now giving those users some love. Let’s dig into those details.

A common frustration with Windows Update in Windows 10 is the reliability of the service. Because of my bandwidth issues, I have to customize Windows 10 to prevent Windows Update from downloading large updates on my metered connection. In the Creators Update, Windows 10 Pro or higher now includes pause updates for up to 35 days. When enabled, updates will not be downloaded for that period of time, but virus definitions for Windows Defender will still be required.

This is a significant concession, and it’s workable for my current setup. I perform Windows Updates weekly at a local Internet cafe; they are just too big for my cellular Internet connection. I find it strange why this option had to be limited to premium business SKUs. 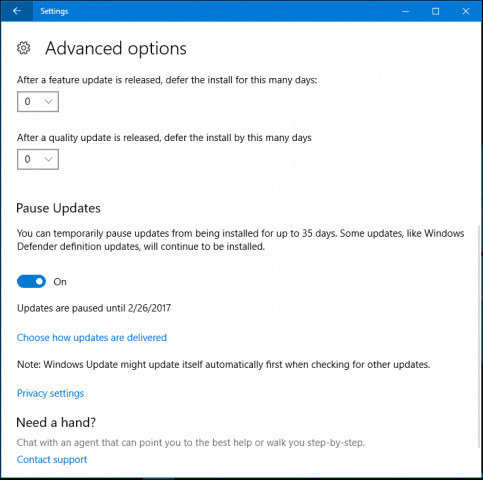 Speaking of big, Microsoft is doing something about those large cumulative updates too. A new option called the Unified Update Platform provides differential updates; instead of packing on the same set of updates each time with more code. Windows Updates will download the changes needed based on your system configuration, leading to smaller downloads, more reliability, better performance, and less common stock at 0% for an eternity issue.

One issue with the new changes, though, primarily affects Windows Insiders and users downloading the feature update on day one – you won’t easily get that ESD file anymore. What are ESD files anyway? ESD stands for Electronic Software Delivery, which delivers a compressed image of the Windows 10 installation files downloaded to disk then uncompressed. It’s still there, but it’s split up into smaller files requiring the use of third-party developed tools to source and compile into a single usable ESD file. That said, the Microsoft Software Download Page and Media Creation Tool will be able to download the appropriate ISO file, so this is really a niche issue. I do hope when future Insider Builds are released, Microsoft will include an option to download ESD for those who want it.

Another new change users should be aware of is the default behavior for how updates are delivered. The option to receive updates from PCs on a local network and PCs on the Internet is now enabled by default. If this is a problem for you, you might want to toggle it off. I personally keep it disabled as it causes high CPU spikes; so, if you notice your laptop fan on constant, this is likely the culprit. 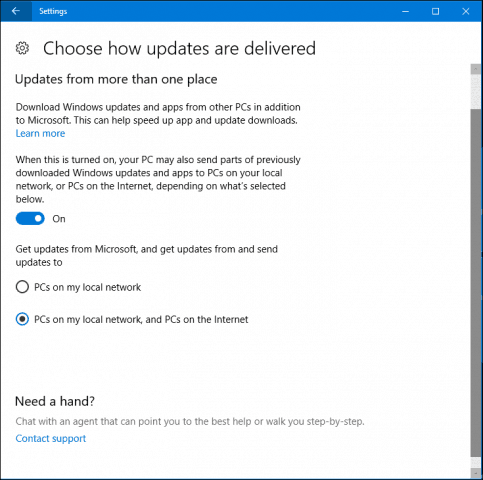 A more accessible option for including driver updates from Windows Update is now available. Users might want to turn this off, too, if they experience problems with an offending driver delivered through Windows Update; especially, if the hardware device or component is working fine already. Previously this was buried under the old Advanced System Settings interface. 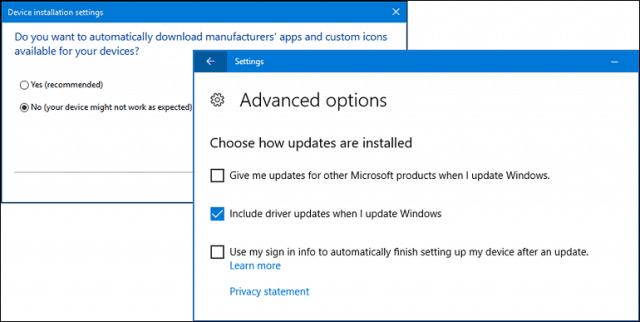 For business users, Windows Update exposes previously hidden configurations for delaying feature updates. In the past, Admins could only find the setting using the Group Policy editor. Now it’s right there in the main interface.

If you use Windows 10 in a domain/large organization, you can now easily toggle settings for how future updates are delivered. The Current Branch is probably the safest to leverage in the business. It will only deploy updates as they become available after Microsoft confirms they have been thoroughly tested and fit for production. This is likely to affect future Windows 10 in the future, such as the upcoming Redstone 3. Advanced options also provide options to delay both feature and quality updates up to eight days. 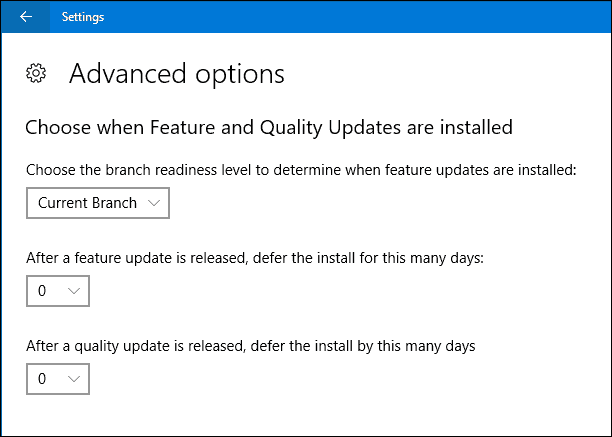 If you need more time, you will need to turn to the Group Policy editor or the registry to make modifications that can defer a feature update for up to 1 year. 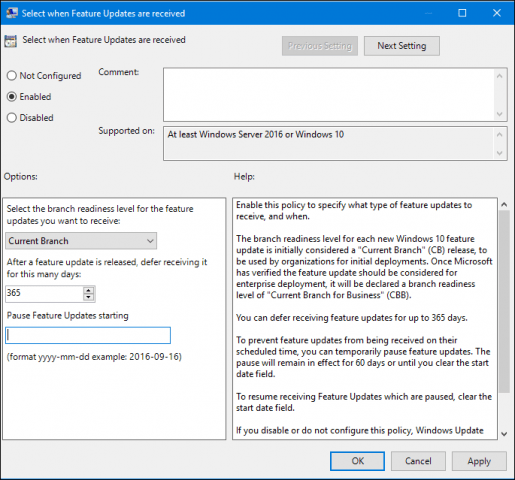 Microsoft does offer an official tool that can also defer feature updates if users believe their system is not compatible with a release of Windows 10. There is not a lot of coordination between Microsoft and OEM’s, so you won’t know for sure if a system is compatible with Windows 10 Creators Update or not unless the update tries to install then fails. 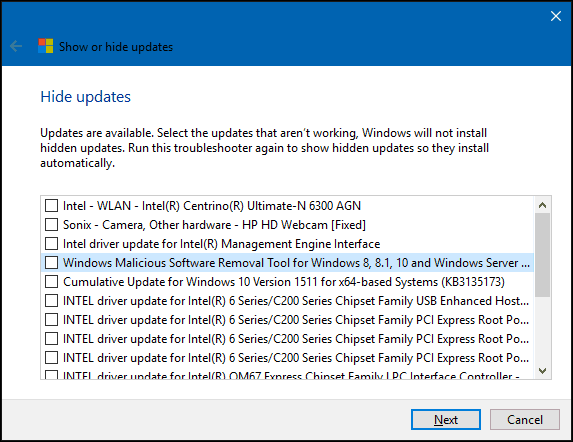 The new changes are small but welcome. When combined with existing options added since version 1607, such as Restart Options and Active Hours, and even the expanded metered connection settings, users will feel more empowered about getting updates for Windows 10.

Remember to check out our previous tutorial about blocking and deferring updates in Windows 10; many of these options are still relevant even for the Creators Update. I personally hope to see Microsoft go further and offer radical options that let me configure my system as a node for updating other computers offline – think WSUS.

Let us know what you think of the new additions to Windows Update in the Creators Update. Have you upgraded yet? How are things going?