Microsoft needs a partnership with Disney’s Movies Anywhere or its own Movies & TV app will fail just like its Groove Music service.

Earlier this year, we told you about the launch of the Movies Anywhere app. It allows you to link popular movie services and watch all your purchased movies from a central app regardless if you bought the flicks from iTunes, Amazon Video, Vudu, or Google Play. It’s a great service; however, the Windows faithful have probably noticed one glaring omission – Microsoft.

Disney owns Movies Anywhere and, before that, had its own digital locker service called “Disney Movies Anywhere” that worked like the current Movies Anywhere but was limited to just Disney content. And, similar to Google and Amazon having issues, Disney pulled support for Microsoft’s Movies & TV. Back in September, Disney canceled its movie service with Microsoft Movies & TV over DRM issues.

The problem is not adding any of your purchased Microsoft movies to the Movies Anywhere service. Recently I was able to get a great deal on X-men Apocalypse on Google Play. It was cheaper to buy than any of the other services. So, after I bought it, with Movies Anywhere, it shows up in my movie collection on all devices — Apple TV, Fire TV, etc.

Now, I might find a film cheaper from Microsoft or want to use Bing Rewards toward one. During its 12 Days of Deals promotion this year, Microsoft was offering a huge discount on movies. While it’s a great opportunity to get the films on the cheap, now I’m hesitant to buy them. I will rent movies from Microsoft and watch them on a laptop or the big screen via the Xbox, but buying one is another story.

If Microsoft doesn’t work out an arrangement with Movies Anywhere, I’m not too optimistic about the video store lasting. It’s worth mentioning that a couple of big Hollywood studios have held out with the service, too. Currently, Paramount doesn’t have an agreement with Movies Anywhere. But the most popular video streaming services are part of the program. The benefit is that no matter which service you buy a movie from, that title appears in your collection in the other apps. 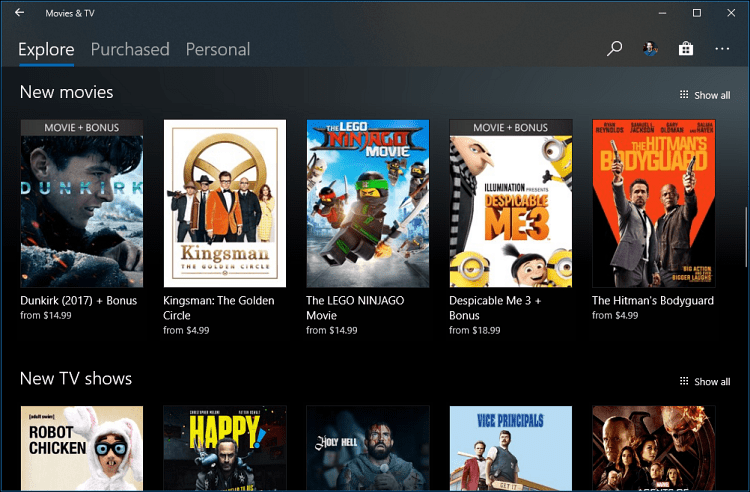 The Movies & TV app on Windows 10 allows you to explore new movies to rent or purchase.

It is worth noting that there is a “workaround” of sorts with all of this. While there isn’t an official Movies Anywhere app for Xbox One, there is a VUDU and Amazon app. Since you can link both of those services with Movies Anywhere, you will see your purchased movies (including  Vudu Disc to Digital) from other vendors, just not Microsoft. However, you can watch anything you bought from Microsoft through the Movies & TV app – for now at least. 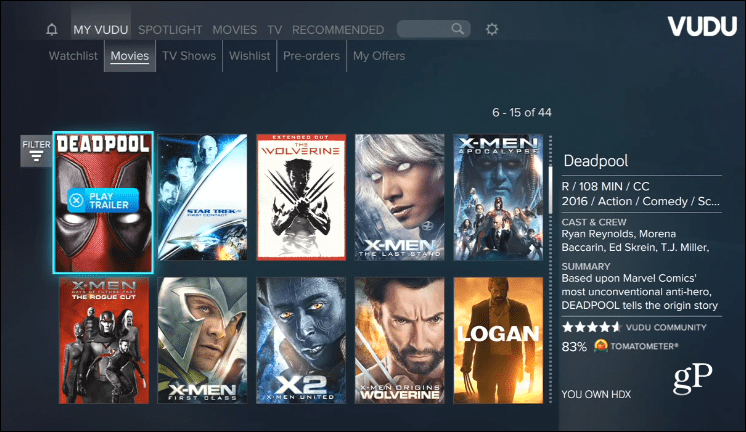 Using the Vudu app on Xbox One, you can watch any movies you have linked to Movies Anywhere.

If a partnership isn’t reached, Microsoft’s video store and the Movies & TV app on Windows 10 and Xbox will remain alone and eventually fade away. Just like its Groove streaming music service. You probably didn’t even know it existed, but Microsoft has had a music streaming service for years that went through several name changes like Zune and Xbox Music. The company has given up on it, though, and after December 31st, 2017, you can no longer stream, purchase, or download music. I hope that isn’t the fate of buying movies from the Microsoft Store. Like the Groove Music app, the Movies & TV app might remain, but things aren’t looking promising for streaming movies.

Do you think Microsoft could and should do a better job with its movie and other media content offerings or drop it altogether? Leave a comment below, let us know, or join our Windows 10 Forums for more discussion and Windows troubleshooting help.