Amazon and Google are feuding and customers for both companies are the losers. Google is removing its YouTube app from Amazon Fire TV and the Echo Show starting January 1st, 2018. This is due to an apparent conflict between the two companies. If you launch the YouTube app on your Fire TV, you’ll see the message that it will no longer be available beginning with the new year. It also points you to the YouTube help page about other devices that support it. 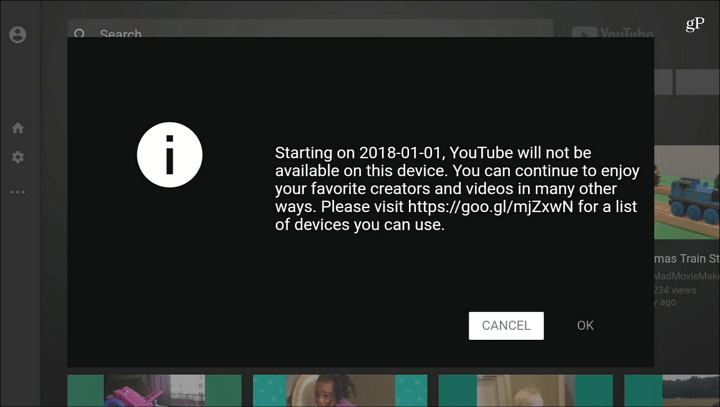 In September, Google started to block YouTube on Amazon’s Echo Show device in October, but it did start working again in November as Amazon implemented a web version. And that version lacks key YouTube features like subscriptions. It’s a similar situation with YouTube on the Apple TV which lacks several features like creating playlists and purchasing content.

Google has a disagreement in Amazon business dealings. Amazon stopped selling Google’s Chromecast in 2015 and it isn’t listing any of Google’s smart devices like the Nest thermostat or its Google Home speaker.

In a Variety report, a Google Spokesperson said, “We’ve been trying to reach agreement with Amazon to give consumers access to each other’s products and services. But Amazon doesn’t carry Google products like Chromecast and Google Home, doesn’t make Prime Video available for Google Cast users, and last month stopped selling some of Nest’s latest products. Given this lack of reciprocity, we are no longer supporting YouTube on Echo Show and Fire TV. We hope we can reach an agreement to resolve these issues soon.”

Amazon later released a statement regarding the matter saying, “Echo Show and Fire TV now display a standard web view of YouTube.com and point customers directly to YouTube’s existing website. Google is setting a disappointing precedent by selectively blocking customer access to an open website. We hope to resolve this with Google as soon as possible.”

This whole thing seems to have begun years ago with Amazon’s implementation of its customized version of Android which the company calls Fire OS that runs on its Kindle Fire tablets and Fire TV. Also, Amazon’s decision to run its own App Store on its devices didn’t sit well with Google and there has been a lot of back and forth since. Whatever the case, it’s really a fight over who has the best platform for making advertising money off its users.

Whether these two tech giants can work out an agreement remains to be seen. But for now, the consumers are the ones who lose out. Of course, if you’re looking for your own workaround for the problem, you can simply navigate to YouTube using the Silk Web Browser on Fire TV.

How important is YouTube being on Fire TV to you? Leave a comment below and let us know your thoughts on the matter.