Microsoft this week released Windows 10 Preview Build 17063 to Insiders and it includes the much-anticipated Timeline feature. Here’s an early look at what to expect.

Microsoft this week released Windows 10 Redstone 4 Preview Build 17063 to Insiders. With this new release comes one of the most anticipated features in Windows Timeline. Microsoft’s Terry Myerson recently explained the benefit of the feature saying, “A visual timeline is integrated directly into Task View so you can easily move back into files, apps, and sites as if you never left.” Here’s an early look at what you can expect from Timeline for the next feature update for Windows 10.

While the current Task View shows the thumbnails of your open apps and other items, Windows Timeline will show up to 30 days of past activity across devices. There is a new Task View icon located next to the Cortana search box in the lower-left corner of the taskbar. You can also use the keyboard shortcut Windows Key + Tab to launch it.

You will see the apps you have open at the top and below that, you see a list of activities you were doing in the past. The history list isn’t just a list of apps, but a deep link to specific content within your apps. Each day displays two rows the things you were doing the most of during that day. Usually, you will see six activates for each day, however, that can vary depending on the resolution of the screen you’re using. If you need to dig deeper and see more, just click on “See All Activities” link. 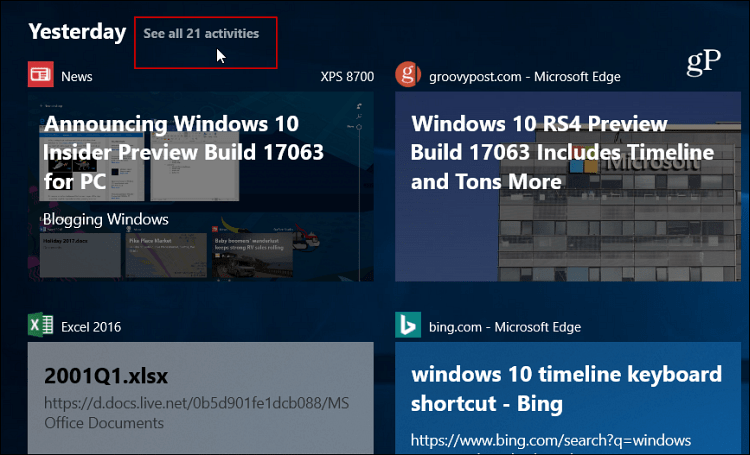 One the right-side you can move the slider up and down to view your busiest activities from the past month. Of course, if you have a touchscreen, you can swipe up or down to scroll it. That really helps when you have those moments when you know you saw or did something, but only have a vague idea of it. This will help jog your memory and find those important moments. You can also search through it to find specific items. 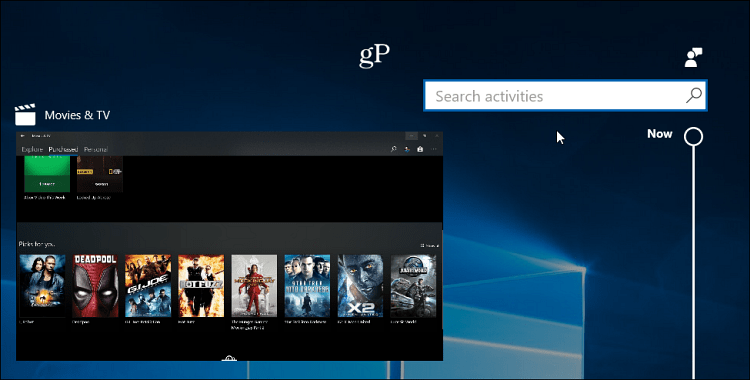 To control which accounts appear in your Timeline, head to Settings > Privacy > Activity History and here you can disable and clear activity history. 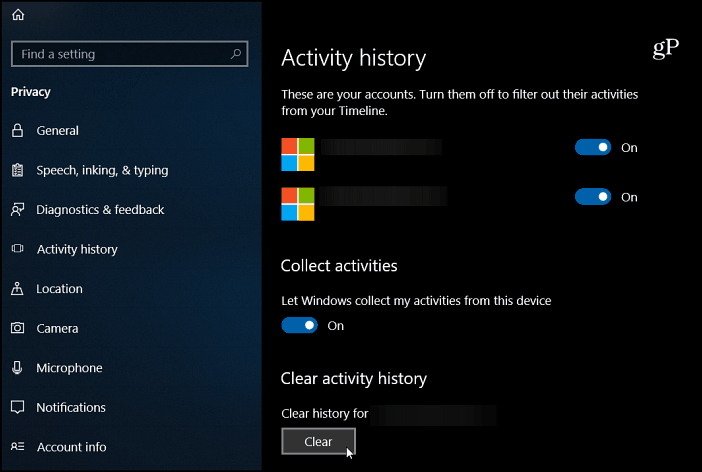 While this is an early look at what we can expect, there is a lot more functionality and options that can be added moving forward. It will be key for app developers to implement Timeline support into their apps. Currently, only some Windows apps are supported like Edge, Maps, Money, Weather, and Office apps. Microsoft has published a guide to help app developers with this. Apps could store data about where you were in an app, so you can pick up where you left off. There seems to be a good opportunity here for game developers, too.

There are some strong possibilities for Edge and Cortana with Timeline. Cortana integration would mean that it could sync up your Timeline activities in apps between other PCs as well as Android and iOS devices. You could go back a few days and find a website or document you were using in Edge on Android, for example.

The Timeline feature isn’t something that’s complicated to use and set up. It feels natural and like it should have been included with Windows 10 since its initial release in 2015. By combining this with the new Sets tabbed experience, it will change your daily workflow for the better.

What do you think of the new Timeline feature coming to Windows 10 next year? Let us know your thoughts in the comment section below or join us in our Windows 10 Forums.