Windows XP was launched in late August 2001, which makes the OS close to 12 years old now. The company is officially axing all support for the legacy operating system on April 8th, 2014. That means there will be no more security updates, free or paid support options, or technical content updates. Microsoft is ending support for Office 2003 at that time as well.

Do You Still Use Windows XP?

On the Microsoft website, you’re strongly cautioned that if you’re running XP SP3 after the end date, you’re using it at your own risk:

Running Windows XP SP3 and Office 2003 in your environment after their end of support date may expose your company to potential risks, such as:

According to a study by NetMarketShare in March of this year, Windows XP still has about 38 percent of the market share, just behind Windows 7 with almost 45 percent.

There is a cool widget from mycountdown.org that you can run on your blog that shows the countdown until Microsoft officially ends support for XP. Microsoft also offers a similar End of Support Countdown Gadget. 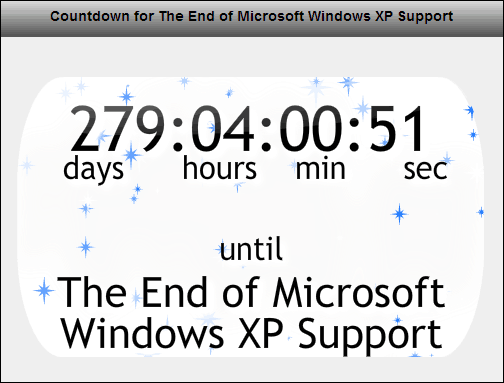 I still have an old IBM ThinkPad G40 with a Pentium 4 rocking XP – but the last time I used it? I couldn’t tell you. Judging by the amount of dust on it, it’s certainly been a while. I do have XP running in virtual machines so I can compare and contrast features in the newer versions, but that’s about it.

So what about you? Are you still running XP on your main computer system, or on a secondary computer? If so, you should definitely think about moving to Windows 7 at least. I mean, the final version of Window 8.1 is set to be to be released everywhere this fall.

Of course, it really all depends on what you need. If you’re old Gateway Pentium III is still chugging along fine and you can email, check the web, and do light document work – that might be just fine for you. Corporations, on the other hand, will need to make preparations for a migration to a newer version – most likely Windows 7.

Leave a comment and let us know what you’re running on your computer and what you think about XP!