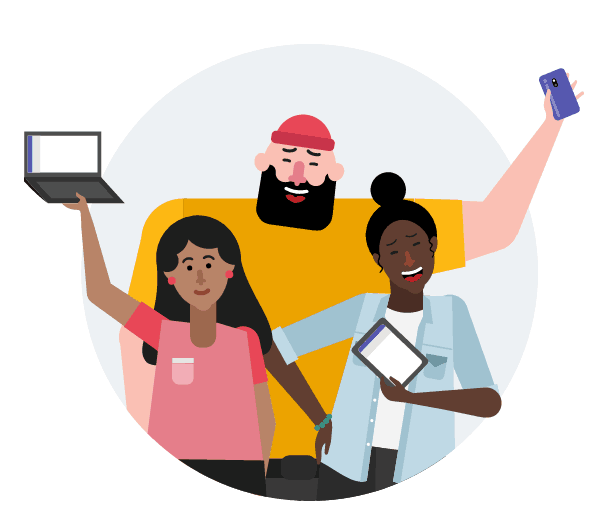 Microsoft’s entry into the chat-based workspace arena is a worthy contender. Microsoft has fully embraced the more “business casual” approach to productivity without losing its edge as an enterprise heavyweight. Unfortunately, there’s no free trial for Microsoft Teams, but we’ll show you what it’s like to take it for a test drive,

Earlier this year, Microsoft announced its new chat-based workspace: Microsoft Teams. This is big news. Slack holds the honor of introducing us all to the the cloud-based collaboration/communication approach. But with Microsoft’s stronghold on the enterprise market and its obvious integration with its gold standard productivity suite of Office 365 apps, there could be a very real threat to Slack’s big market share.

This is a more strategic move on Microsoft’s part than some may realize. Microsoft continues to expand its offerings under the software firm’s Office 365 platform. So far, Microsoft has introduced an array of web services and apps such as Power BI, Planner, Outlook Desktop Groups and Delve to help usher in a new generation of knowledge worker experiences. Many of these apps and services are not targeting just the traditional enterprise and SMB user, but start-ups who want to work just as efficiently. The latest addition is Microsoft Teams, a chat-based service that is a direct competitor to slack. Focusing on team based conversations, Teams brings the best of services such as Skype for Business, formerly Lync and SharePoint into an easy to configure environment for Administrators. Teams is also quick and easy setup for end users.

In this article, we’ll take a look at how Microsoft Teams works and give you a hands-on review from an early adopter perspective.

Getting Started with Microsoft Teams 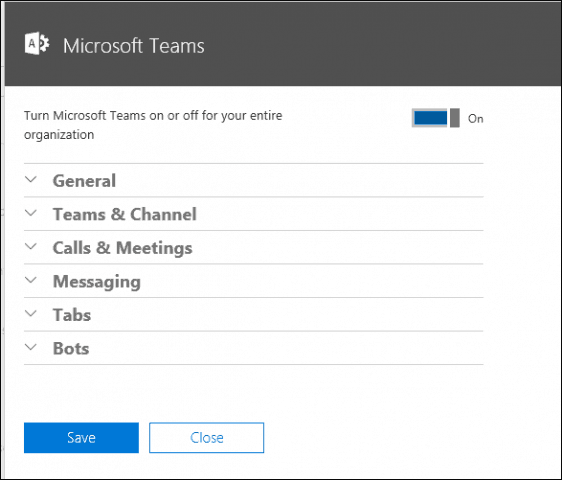 After configuring Office 365, end users can log in and set up an account at teams.microsoft.com. I must admit, configuring an account is a little more involved than Slack, which feels more like just logging into Facebook. To Microsoft’s credit, the Teams setup process guides users through the process while giving them an overview of how it works. While it doesn’t reduce the complexity of the process, it does help acclimate users to the new environment. 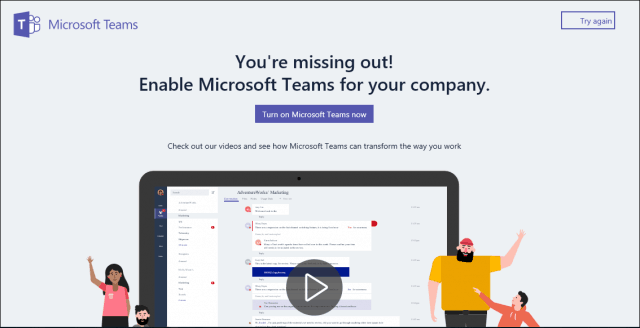 Users can also download dedicated client apps for Windows and Mac and iOS, Android and Windows Phone. The Windows client is an MSI-based installer, instead of a universal app, which I found interesting. Whichever you choose, Microsoft has done its homework to make the experience seamless and integrated, regardless of the device or medium.

Teams features an interface structured around conversations. Users can set up groups for different projects and easily start conversations with specific users. After logging in, you are prompted to create a team and give it a description. 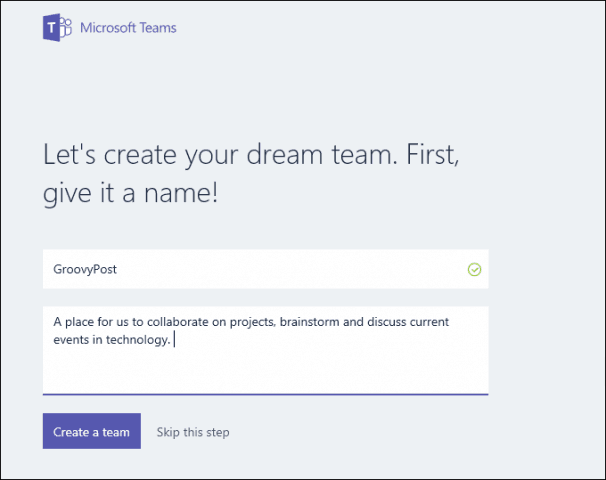 You can add people, groups, and distribution lists from within your organization. 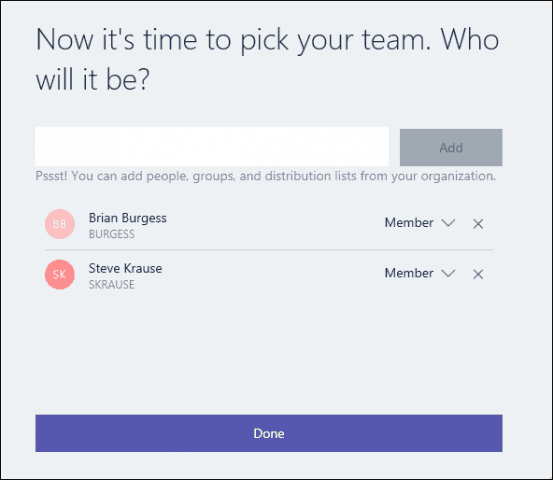 Working with Teams and Individuals

The Teams interface is simple and easy to navigate. On the left are tabs where you can view your recent activities, active chat sessions, existing teams, scheduled meetings, and files.

Users can create new teams at any time, which is great for getting started on a project with specific members within your organization. You can keep interactions within the specific team, so when you upload files or add notes, they’ll be clearly associated with the right team or project. Interacting with individual members for private communications is also available. Just hover over a contact name, which pops up a contact card then choose to start a private chat session, send an email, view organization role, video chat or send a call.

One of the things I like about Microsoft Teams is that it’s not business as usual, it feels more like business casual. I guess this is a result of the market Microsoft is entering.  Microsoft seems aware that the new generation of users are more hipster, Silicon Valley, start-up types. One example is the support for a wide collection of fun, comic strip-like emoji. Teams categorizes these emoji’s into business-friendly categories with the infamous Office Drama, popular meme past time, and team friendly Designers, Devs and Legal. 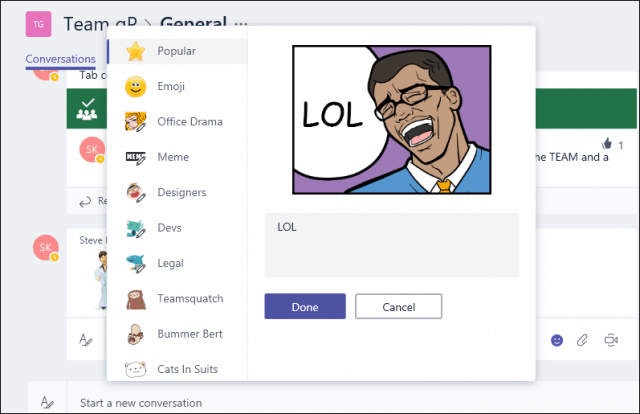 Even the login page reflects this, with a diverse group of bouncing, active characters (with nary a one garbed in suit nor tie) which give the feel of embracing a younger generation.

That’s not to say that Teams isn’t focused on getting down to business. Teams meets the powerful standards of Microsoft’s Office 365, which is quite impressive. You can work on Word, Excel and PowerPoint files seamlessly from within Teams itself. Files stored on your OneDrive for Business are available from within the File tab. Clicking on an Office document will launch in their respective Office Web app, where you can view, perform quick edits or collaborate with colleagues.

If you are confused or don’t know how to do something, Teams tries to help you out using the built in artificial intelligence. Strike up a conversation with the T-Bot AI, ask it for help and it will show you how. For example, you could ask for instructions how to add an image or upload a file and T-Bot responds with a visual tutorial on how to get it done.

So, how does Microsoft Teams compare to the incumbent, Slack? Slack certainly has a head start in several areas, but there are weaknesses that Teams can exploit. Slack is easy to set up and its free with a small caveat. Teams is not free and it doesn’t even give you a taste of it. With Slack, anyone can set up the service for free and the reality is, it’s a bit sticky. I have been using it for a year now and it’s become second nature like checking my social media platforms each morning. This is a mindshare Microsoft Teams does not have yet among a core group of users who are accustomed to non-Microsoft technologies, but instead prefer using Google Hangouts, Docs, HipChat and the usual collection of startup services that became standards through word of mouth. Where Microsoft will likely edge out Slack is the enterprise and potentially the SMB market.

Eventually, scale is a reality and even Slack knows this—that’s why even the free tier of the service tops out at 10,000 messages. The eventual end game is to make you a paying customer so you can keep that conversation history, if that matters to you at all. With Teams, that’s not something you have to worry about and the reality is, if you are an Enterprise or SMB customer, Office is certainly a part of the conversation. Powerful integration with Office 365 services such as OneDrive and Skype makes this an attractive choice for customers already invested in the Microsoft ecosystem.

Microsoft is off to an impressive start for a first of its kind from the company. The fact that the software behemoth could cohesively bring together Microsoft’s popular services together into such an easy to use platform is itself impressive. Users also don’t need to worry about it being Windows specific service only, it works just as well on the Web, iOS or using a dedicated client.

To say Microsoft is a newbie in a category like team conversations isn’t quite accurate. After all, this is the company that owns Skype and created Outlook, SharePoint and Exchange Server. The company has a serious history in messaging; Lync, MSN Messenger and even defunct Office apps like Team Manager 97 had a good run. Microsoft really has put in serious research and effort into this service and I think they are off to a good start.