Microsoft Teams is a chat-based workspace that aims to be a Slack killer. With tight integration with Office 365 and Microsoft’s other products, it just might catch on.

Today, Microsoft jumped into the new era of chat-based workspaces by announcing Microsoft Teams, a clear competitor to Slack. Slack’s game-changing approach to collaborative communication has made it the darling of Silicon Valley teams and early adopter hipsters in small and medium businesses. But Microsoft’s monolithic clout in the corporate world and its ability to integrate with its long-established productivity suite just might give Slack a run for its money.

You can take a look at ourhands-on review of Microsoft Teams, or check out the video below:

Just like Slack, Microsoft Teams works on the web as well as on macOS, Windows, iOS, and Android. Teams also touts deep integration with new and existing Microsoft technologies such as Planner, Microsoft Office, SharePoint, OneNote, Power BI, and Delve. This is a significant advantage for the software giant since these Microsoft products are likely already deployed in most large enterprises and SMBs. Slack has been trying to expand beyond its early adopter base and so far, it seems to be catching on. The big question: Will Microsoft derail those future chances for accelerated growth?

Microsoft Teams: A Hub for Teamwork with Deep Office 365 Integration

Truth be told, even though Slack is a popular choice among teams, it is one of many choices in a highly competitive market. Similar solutions like Google Hangouts, HipChat, and even Facebook provide similar capabilities. Back to Microsoft Teams, the new chat service supports both persistent and threaded chats. Teams works with Microsoft’s popular communication platform, Skype; users can start a voice or video conference with colleagues right from within the service. By default, all chat sessions are visible to an entire team, but you can also start private conversations. Why did Microsoft decide to build Teams though?

At Microsoft, we are deeply committed to the mission of helping people and organizations achieve more—and reinventing productivity for the cloud and mobile world is core to our ambition.

We built Microsoft Teams because we see both tremendous opportunity and tremendous change in how people and teams get work done. Teams are now more agile and organizational structures more flat to keep communications and information flowing. With Microsoft Teams, we aspire to create a more open, digital environment that makes work visible, integrated and accessible—across the team—so everyone can stay in the know. Source 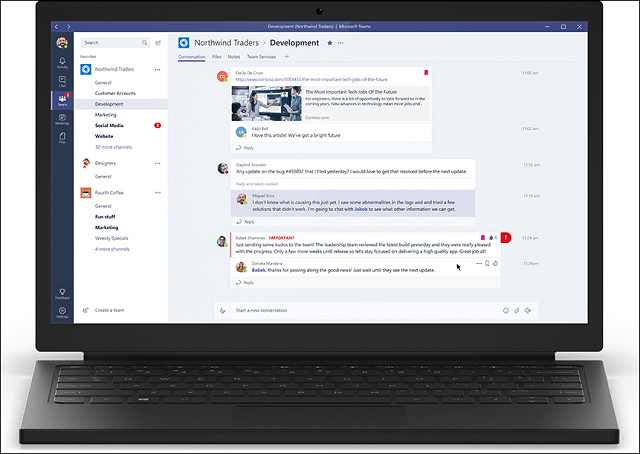 Microsoft Teams sets itself apart through its deep integration with the rest of Microsoft’s services, technologies and ecosystems. Because Microsoft is now a platform-agnostic company, many of these solutions already work on popular third-party platforms. Microsoft is also powering Teams with key services such as the Microsoft Graph, which makes a discovery, relevance, and sharing even more powerful.

The recently introduced Office 365 Groups is also supported, making it easy to move from small, siloed groups to larger team projects if needed. Microsoft Teams is just one of many in the company’s large portfolio of communication tools. Along with Yammer, Skype, Exchange, SharePoint, and Office 365 Groups, Microsoft is serious about being part of the conversation. 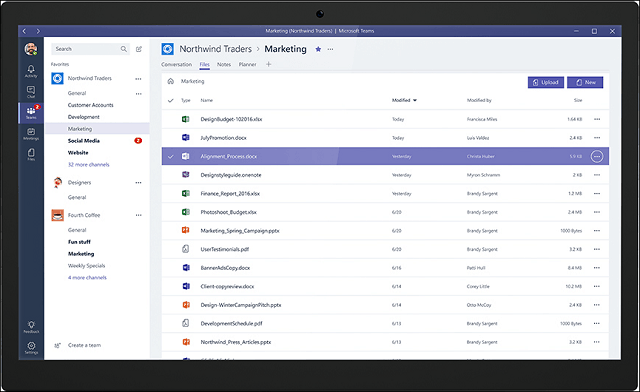 Microsoft Teams is available only to Office 365 Business Essentials, Business Premium, and Enterprise E1, E3, and E5 tenants. Teams will also be available to customers who purchased E4 prior to its retirement.

Pricing may be one of the distinct advantages Slack has over Teams right now. Slack currently offers an “unlimited” free tier, with limitations on searchable message archives, storage space, and the number of apps and service integrations. Slack’s tactic is to hook collaborative teams on the platform and then leverage their loyalty by roping them into the paid tiers, which offer more features and storage, group calls, priority support, and other features. In order for Microsoft to take a bite out of Slack’s slice of the pie, they’ll have to convince their target user base to sign up for a paid Microsoft Teams service before they try it out.

Microsoft Teams is available in preview to eligible Office 365 customers starting today. The service will become generally available in the first quarter of 2017.