The Logitech CRAFT keyboard includes a programmable input dial that will help designers and creators power through their workflow.

When it comes to PC accessories like keyboards, mice, and speakers, one of the leaders on that front is Logitech. From the durable K840 mechanical keyboard for power typists to the K830 Illuminated keyboard for controlling streaming media in the living room, Logitech has high-quality peripherals to fit virtually any need you may have. The CRAFT wireless keyboard with an input dial is no exception. It’s well constructed and fulfills a need for creators and users of desktop publishing software alike with a customizable input dial.

The company announced the new CRAFT keyboard this past August, and we were able to get our hands on it and put it through its paces. One of the first things you’ll notice is the keyboard is solid and well-crafted but much heavier than your average keyboard. This isn’t just a flimsy $10 plastic keyboard; it’s a flagship device. The creative input dial, which Logitech calls “The Crown,” is the most notable part of this keyboard, and it’s not just a volume knob (although you can use it for that). 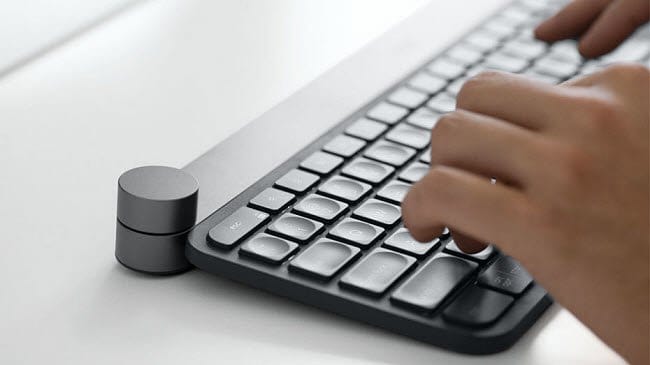 With the Logitech Options software, it’s completely programmable to work with virtually any app you’re running. The creative dial is pressure-sensitive and will adapt to the app you’re using it for. For example, you can use it to quickly move between open tabs in your browser or playlists in Spotify. But for power users, it can be programmed to slide between items in an Excel spreadsheet. 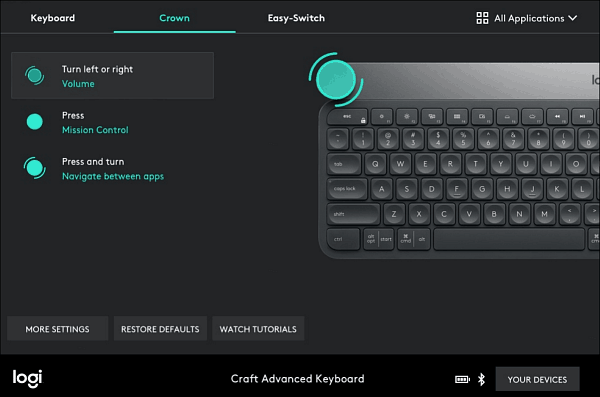 Creators can easily switch between tools in desktop publishing software like Photoshop. The dial does take a bit to get used to, though. I found it quite sensitive, and you barely need to tap the crown to choose an item on the screen. But its Timeline Navigation or Jog Wheel settings do appear on the screen, so you’ll always know which mode it’s in at any given moment. To better understand how the dial works between apps and platforms, check out the following video.

Another interesting feature is the illuminating keyboard with proximity sensors. The chicklet-style keys change brightness based on how close your hands are to them. Similar to the motion-activated back-lit controls on the Logitech MX Speakers. Like its other flagship products like the MX Master 2S wireless mouse, it uses Logitech FLOW technology and lets you use the keyboard between devices. It has Windows and macOS keys, which are handy when you need to move between the platforms.

This keyboard with an input dial is a great tool for creators who fly through desktop publishing software. However, if you do a lot of typing, this isn’t the keyboard for you. It rests with only a slight angle, and the key travel feels very shallow. If you use a wrist rest, it will make things even more awkward and uncomfortable. Logitech has plenty of other keyboards to choose from, though. Something like the MK850 Performance wireless keyboard mouse combo comes to mind if you’re a power user looking for comfort.

The CRAFT connects to a Mac or PC with a 10-meter (33 feet) wireless range via the included Logitech Unifying Receiver or low energy Bluetooth. The Logitech USB Unifying Receiver works on macOS 10.11 and above and Windows 7 or higher. To connect via Bluetooth, you need Windows 8 or above or macOS 11 and higher. This keyboard is doing many things, so one thing to keep in mind is it will need to be changed often. I was betting on about a week of use with one charge. You can recharge it using the included USB type C cable.

If you are a power designer and work in apps like Photoshop all day, the CRAFT keyboard is worth considering if you want to improve productivity. However, if you’re looking for a comfortable keyboard to do a lot of typing, check out a different model instead.

The Logitech CRAFT keyboard will be available for purchase now at select retail stores and direct from Logitech.com for a suggested retail price starting at $199.99.