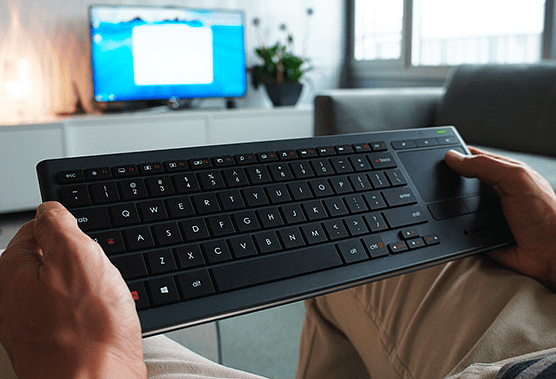 Logitech recently released it’s Illuminated Living-Room Keyboard K830 that is meant as a home entertainment companion. Here’s our review of the unit.

Logitech recently launched its Illuminated Living-Room Keyboard K830, aimed at those of you who use Windows Media Center, Plex, or XBMC from a PC and want to take your keyboard work to the couch. It illuminates in the dark while you’re watching a movie or other video and also lets you control Windows 7 or 8,x if you have it connected to the big screen.

Contents of the box:

For media, it has various Function keys that let you control playback, and it also includes a built-in touchpad for controlling the desktop in Windows. It’s very responsive and accurate, and you can actually get a lot of work done if you’re using the living-room HDTV as a secondary display. Of course, it comes in handy while giving a presentation at the office as well. It also allows you to control different aspects of the screen with its built-in touchpad.

To set up the K830 to work with your PC connected to the big screen, plug in the included USB unifying receiver into an available port on the computer. The unifying receiver allows wireless keyboard control of your computer from up to 33 feet away. This keyboard is meant to be used while kicking back on the couch, recliner, or from bed. While you can use it from a desk, it’s not a comfortable experience due to the size and inability to kick it up at an angle as you can with most desktop keyboards.

The internal battery is rechargeable and is touted to last up to 10 days between charging. Of course, you would need to be typing for two hours a day for those ten days with the backlight on before it would need a recharge. I am not sure how much work and typing most people would be doing at night from the couch, but the main point here is the rechargeable battery lasts a long time between charges. To charge it up, connect it to your computer using the micro-USB cable. 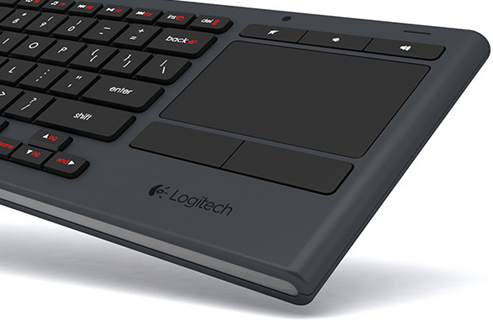 I’ve found the keyboard to be a bit small for my liking; however, it’s not like you’ll be writing long dissertations with it. It’s perfect for typing in your login credentials to services like Netflix or Hulu Plus. Nothing is more annoying than hunting and pecking your way through onscreen keyboards with a remote to enter in your username and password. Plus, it’s light at just over one pound.

I’ve been using it for about three weeks now and find the touchpad accurate and responsive. It’s nice having three volume control buttons at the top of the touchpad too. It is a full-size keyboard, but it seems a bit cramped for my taste, so fluidly typing on it can be difficult – for me anyway. But, of course, as with so many things, keyboard comfort is a subjective topic.

Another annoyance of this keyboard is the power button is in a location that is a bit difficult to turn on or off. It’s a slider-type power switch, and I think a push-button one would be better. Also, while the touchpad is a nice touch, it’s set to the board’s right, and that might turn off lefty’s as well. Finally, it’s also worth mentioning that a left-click button is located at the top of the left side.

If you have a computer set up in your living room that you use as your home theater PC, I would definitely give this one a shot. As I said, it’s great for a multimedia setup companion in the living room. But don’t expect to get “serious” work on your computer done with it.

If you’d like to compare the K830 with a previous Logitech version, check out our review on the Logitech K800.

The Logitech K830 Illuminated keyboard sells for $99.99. However, at the time of this writing, you can pick it up on Amazon for under $80– not a bad deal!

To see the K830 in action, check out the following short promotional video from Logitech: