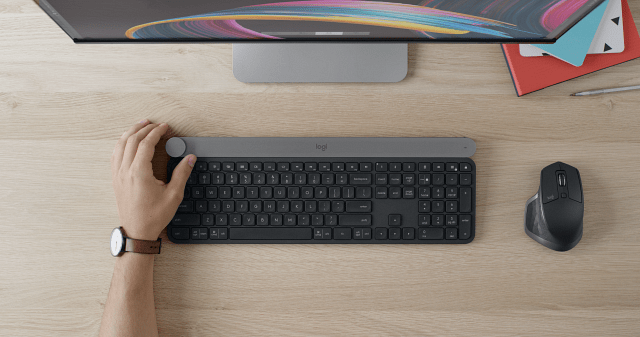 Logitech today announced its new wireless CRAFT keyboard with a smart illuminating keyboard and unique creative input dial. This is a flagship keyboard geared toward creators who use Adobe Photoshop and other desktop publishing programs. It’s also aimed at power users who want to get things done efficiently and improve their productivity.

The touch-sensitive aluminum smart dial, called the “Crown” is located on the upper-left corner of the keyboard. It recognizes the apps you’re using and provides instant access to the tools you need. With a touch, tap, or turn you can adjust image brightness, contrast, and saturation, or simply zoom in and out of images in Photoshop. The Crown also works with Microsoft Office (2013 and above) and allows you to move between rows and cells quickly in Excel spreadsheets to create charts. It aids in creating PowerPoint slides and simply adjusting font sizes in Word. 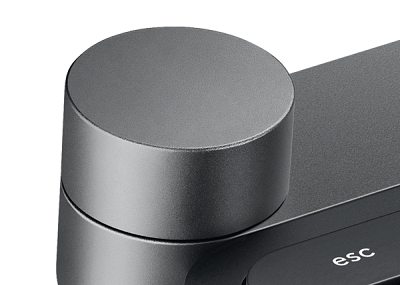 It uses Logitech’s proprietary Flow technology which is part of the Logitech Options software (available as separate download) that allows control of up to three different devices from the keyboard. The smart illumination with backlighting detects your hands and adjusts lighting automatically depending on the room conditions. You can also control the backlit keyboard brightness manually.

“Our new flagship Logitech CRAFT keyboard is for all of us who spend time creating using Photoshop or building PowerPoint slides and want to work with greater precision and feel connected to their work,” said Art O’Gnimh, global head of keyboards at Logitech. “The creative input dial gives you instant access to the functions you need, the moment you need them, allowing you to increase your productivity. CRAFT puts you in your creative element – every time you sit at the desk.”

The CRAFT connects to a Mac or PC with a 10-meter (33 feet) wireless range via the included Logitech Unifying Receiver or low energy Bluetooth. The Logitech USB Unifying Receiver works on macOS 10.11 and above and Windows 7 or higher. To connect it via Bluetooth you will need Windows 8 or above or macOS 11 and higher. Logitech touts that the CRAFT should last you a full week with one charge. And it is rechargeable using the included USB type C cable. It’s also compatible with Logitech FLOW enabled mice such as the Logitech MX Master 2S.

The following videos from Logitech demonstrate the keyboard in action. First starting with Microsoft Word:

Here it is working on a Mac in Adobe Photoshop CC:

The Logitech CRAFT keyboard will be available for purchase in October at select retail stores and at Logitech.com for a suggested retail price of $199.99. We will be posting a full hands-on review in the coming days so stay tuned!