Microsoft today released the Windows 10 Insider Preview Build 10080 for phone. Here’s a tour of some of the new features and what you can expect.

Microsoft today released the Windows 10 Insider Preview Build 10080 for Windows phone. Here’s a tour of some of the new features and what you can expect.

Another thing, not mentioned on the Microsoft Blog, that I noticed on my Lumia 635 is the Tiles are a bit larger, the text is bigger, and there are some changes to the icons. Also, in the new Store Beta, which is essentially the same as in Windows 10 for PC, is you can purchase movies and TV shows, but purchasing music isn’t available yet. 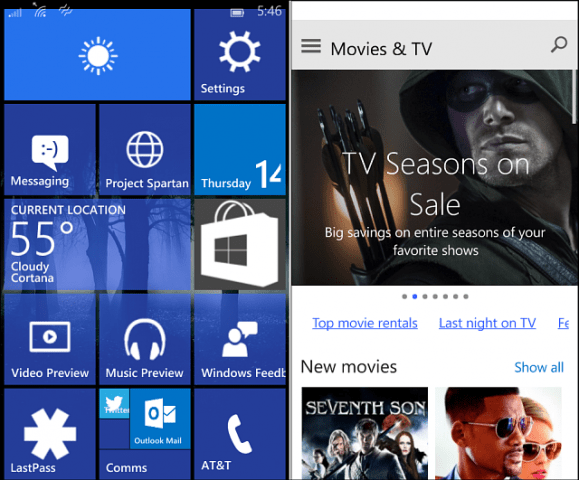 This version of Windows 10 for phones also adds a new Camera app that the company wants to get your feedback on. Microsoft notes that “high-end Lumia devices (1520, 1020, 930, 830, 640, and 640XL) have some features not supported by the new Camera app. For these devices, the new app will work but to get the full functionality from your device you will need to use the Lumia Camera app.”

Microsoft is making this build available on more phones today, too. You can now install it on the Lumia 930, Lumia Icon, Lumia 640 and 640 XL, and the HTC One (M8) — sans Verizon customers with the M8.

To get this latest build, you need to be part of the Windows Insiders program and enrolled in the Fast Ring for getting updates. For full instructions on signing up for insiders program read: How to Install Windows 10 for Phones Technical Preview.

To get the update head to Settings > Update & Security > Phone Update and start the download. The build will show up as version 10.0.12562.84 in Settings > System > About under Device Information.

Remember this is still a beta build, and if you don’t want to deal with bugs and crashing apps, don’t install this on your main phone. If you do want to test things out on the cheap though, read our article: Want to Test Windows 10 for Phones? Get a Lumia 635 for $49.