For a couple weeks, users have been reporting problems trying to download the ISO file for Windows 10 from Microsoft. Here’s what’s going on and what it means for the future of ISO images.

Update: Windows 7 is no longer supported.

Since its launch in 2015, Microsoft has provided direct downloads for Windows 10 ISO images. The ISO images are really handy since it makes it easy to create Windows 10 media for new installs or upgrades.

For a couple weeks now, however, users have been reporting problems trying to download the ISO file for Windows 10 directly. Our forum tutorial which describes the process for choosing your language, edition, and architecture, no longer works on Windows 7 and later versions (Windows 8, 8.1 and 10). Instead, users are directed to use Media Creation Tool, which provides similar functionality, but can sometimes be glitchy or produce corrupt ISO files. I was able to access the site from a Ubuntu Linux installation under Firefox and download ISO’s just fine — at least for now. 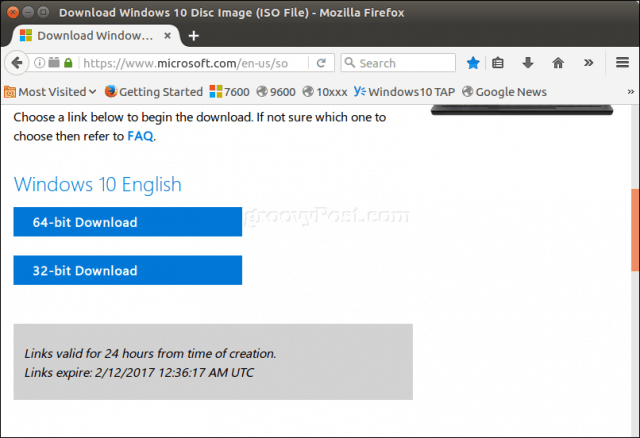 Using an alternative web browser on Windows 7 or later will not work, though. Once the site sniffs out that your computer is running a version of Windows that supports the MCT, it will be required to use that, which to be honest, isn’t so bad. My guess is Microsoft is looking to simplify the overall process around upgrading/installing Windows 10. Although working with ISO images is convenient, for the non-geeky it can be advanced.

In addition, for those already running Windows 10, Microsoft includes several tools for performing a new or fresh install, these include a system Reset, the Refresh Tool and the ability to create a Recovery Drive. Surface Book and Surface Pro 4 owners can reinstall Windows 10 directly from the Internet or download a recovery image just for their device.

In other words, we have options, and it’s exciting to see Microsoft continue to fine tune Windows 10 as we march into 2017.