Microsoft is ending mainstream support for Windows 7 today. Here’s what you need to know and some of your options moving forward.

Microsoft today is ending support for its ten-year-old Windows 7 operating system. The company will no longer send out security or performance updates to Windows 7. Also, users will no longer be able to get technical support from Microsoft.

Only business and enterprise customers who qualify (and pay) will continue to receive updates through the Microsoft ESU program. If you’re still running it on your home computer, it’s time to get a new PC with Windows 10 or upgrade your existing system.

As we explained in our previous article, your computer will not stop working if you choose to keep running Windows 7. However, as more exploits turn up, Microsoft is not going to patch them. This means your system and data are much more vulnerable to malware attacks.

You’ll also continue to see nag notifications like the one below telling you that your system is out of date. And urge you to either upgrade to Windows 10 or buy a new Windows 10 PC. 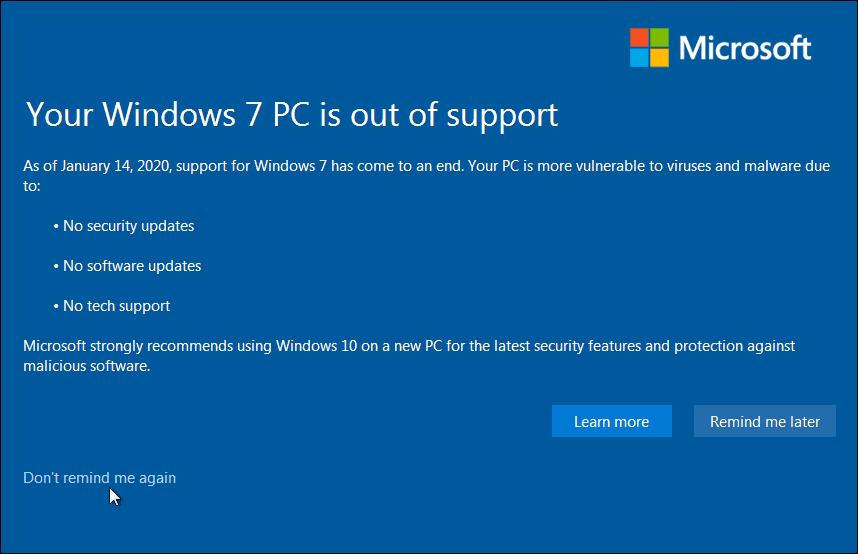 Microsoft will continue to update virus definitions if you’re using Microsoft Security Essentials (MSE) as your security software. However, it’s not entirely clear how long that will last. This is what the company says on its support page:

If you’re running third-party antivirus security software (or any third-party software for that matter), make sure to check with the respective company to find out how long it will continue to support Windows 7.

Can I Upgrade to Windows 10 for Free?

Maybe. If you have a valid Windows 7 license that has been properly activated, you can try an in-place upgrade to get Windows 10 on your current PC. Go to the Windows 10 download page and download the Media Creation Tool. Launch it and choose the “Upgrade this PC now” option and continue with the wizard.

But keep in mind that this “trick” isn’t going to work for everyone. The update could be blocked due to out-of-date BIOS or firmware, hardware drivers, or installed software. Plus, Microsoft could turn this workaround off at any time. So, your mileage may vary.

If the free trick doesn’t work and you still want Windows 10 on your PC, you need to buy it. You can purchase Windows 10 from Microsoft. Windows 10 Home costs $139.99, and Windows 10 Pro sells for $199.99. Or, you can typically find a Windows 10 digital license for a few bucks less on Amazon.

But rather than trying to work through the hoops of getting Windows 10 on your old machine, it’s probably best to invest in a new one. You can find good deals on affordable Windows 10 computers at electronics stores like Best Buy. Or get one at a retail store such as Target or Walmart.

If you’re a gamer, power user, or enthusiast, then you’ll get a new machine (if you don’t have one already). But for casual users, it might be time to rethink your computing needs at home. Nowadays, most people can get by with just their phone and/or tablet for email, listening to music, pictures, and web browsing.

If you need to type and/or print the occasional document, consider getting a Chromebook. They are especially affordable ($300 or less) and can handle any light word processing and spreadsheet work via Google Docs. You can also run Android apps on a Chromebook. You can transfer any files from your Windows 7 machine to it via the cloud using Google Drive, Dropbox, or OneDrive. Or use a USB Flash drive. And yes, you can print from a Chromebook.

Just like when XP support ended, a lot of people said: “My computer works fine. I don’t need to update.” And you should be able to continue to get by with Windows 7 for a few months. Just remember that Windows 7 is a ten-year-old operating system. Microsoft initially launched it on October 22nd, 2009. The company has released two new versions of Windows since 2009.

As annoying as it might seem, tech doesn’t last forever. Windows 7 had a good run, but Microsoft is killing it and moving on. And like it or not, its users need to move on, too.