If you’re between 20 & 40-ish, then you’ll be very familiar with Facebook. But if you’re new to the Internet, you may be wondering, “what is Facebook anyway?”

If you are under the age of say 40-50 years old, you will probably be very familiar with Facebook (a.k.a. The Doctor Evil Corporation). Over those ages and your knowledge might start to get a bit fuzzier. I mean, can you imagine trying to explain to your mother or grandmother what Facebook is? What a “poke” is? No, let’s not even go there with the poking.

Also, there are users in other parts of the world where Internet connections are scarce or non-existent. And we know not everyone is as geeky and tech-savvy as others. So, the point of these articles is to help explain some of the basic concepts of the Internet for beginners. For example, we have articles such as What is Gmail? and What is a Podcast? for beginners. And other pieces such as What is IFTTT? and What is 5G? for more experienced users. And today we take a look at another beginner topic with “What Is Facebook?“.

Facebook is a social networking website, where like-minded people can get together to discuss their mutual interests. People can also “follow” friends and family for their latest news, weblinks, jokes, political wars, and whatever else you want to discuss.

Once you have made an account, you will quickly see there are many different facets to Facebook. If you are a first-time user, you will need to spend some time studying them all. But here is an overview of what you can expect. It’s not a complete list though. 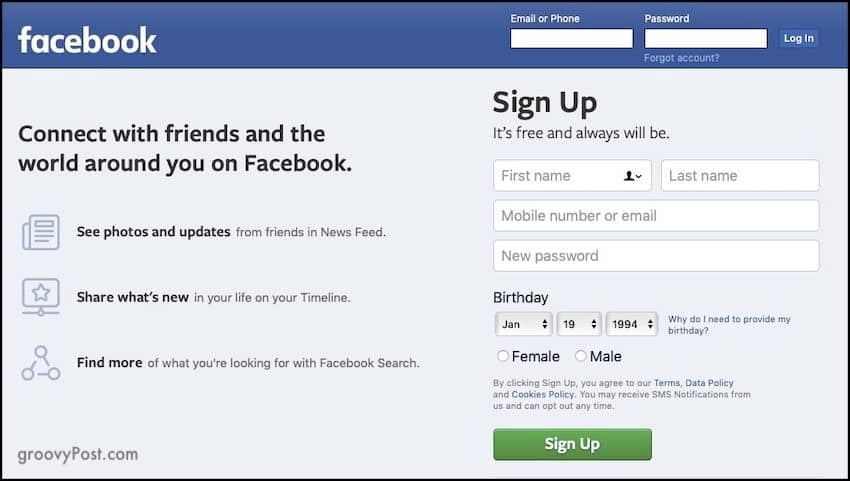 The first place you will land on when you log in for the first time is the news feed. This is where everyone and everything you follow will appear as a “status update”. You can interact with each status update with a “like” and/or a comment. Status updates with the most interaction get the most exposure from Facebook, with algorithms deciding what gets pushed to the top.

Comments can be threaded and specific people tagged to make the conversation more orderly and easier to read.

At the top of the page is the status update box where you can add what you want. You can add text, photos, polls, stickers, and more. If you are only posting text under 240 characters, you can also add a colored background. A privacy setting has to be specified so Facebook knows whether everyone can see what you have posted, or only your approved followers. 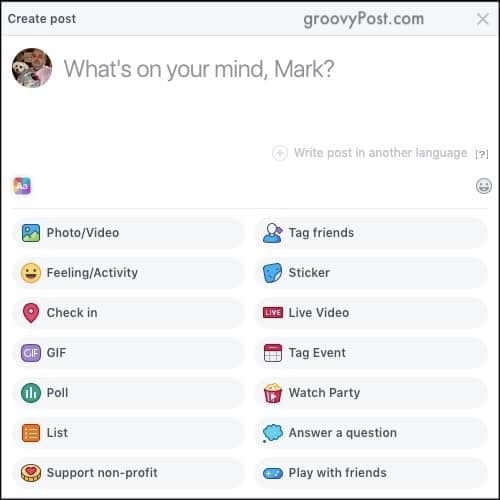 Messenger is Facebook’s chat program and is a pretty good one at that. I would actually rank it higher than Skype, which I thought I would never do.

The service has gone through a lot of changes over the years, but now you can send money to one another, interact with bots, play games, send files and photos, call one another, send voicemails, and access it as a standalone service at messenger.com. Not to mention that everything is now encrypted. The smartphone app is also great and you can hook Messenger up to your business page, giving you a direct line of communication with your customers. 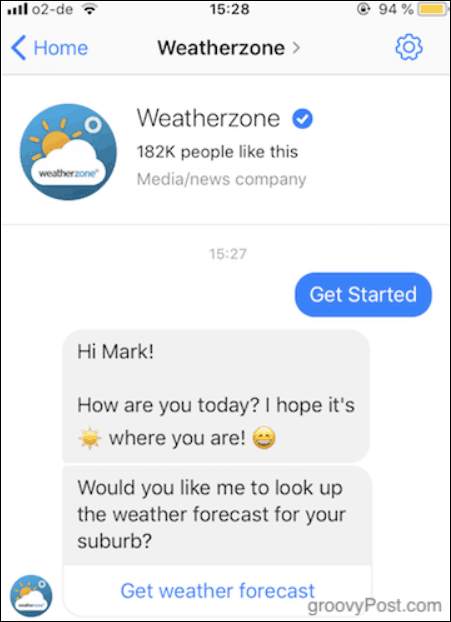 In an effort to take some of the video-watching pie away from places like YouTube, Facebook came up with its own video watching section, called “Watch”. Basically, if you follow a page and that page posts a video, then it will appear in the “Watch” section (as well as on the page). You can watch the video (obviously), comment on it, like and share it. Then it bounces to the next auto-playing video unless you stop it first.

It’s nice if you have a spare five minutes and you want to watch a couple of videos. Facebook also notifies you when a new video has been posted. 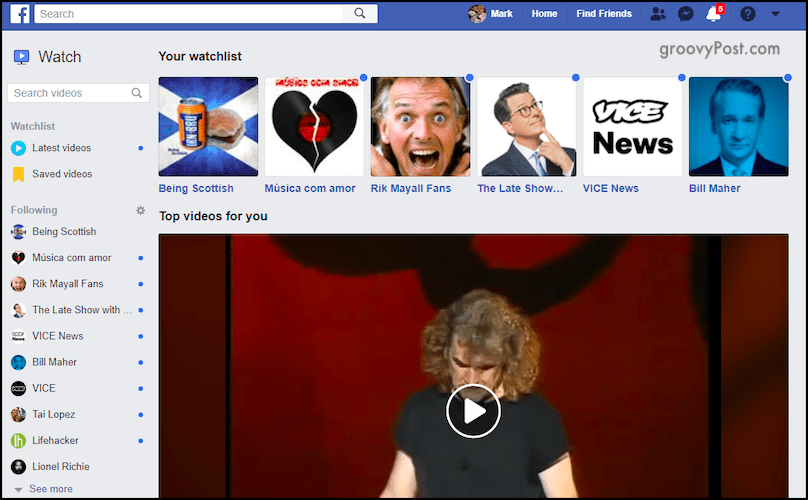 To deliver a sharp right jab to online marketplaces like eBay, Facebook has also started their own version called “Marketplace” (original name, right?). It will show you all the deals from other users in your area. You can also search further afield if a distance is not an issue and you’re willing to pay for shipping. You can contact the seller through Messenger to conclude the transaction.

Obviously, be wary though because Facebook doesn’t offer any buyer protections as eBay does through Paypal. If a Facebook seller scams you, you’re pretty much up against the creek without the proverbial paddle. But one upside is that there are no listing fees, unlike eBay. 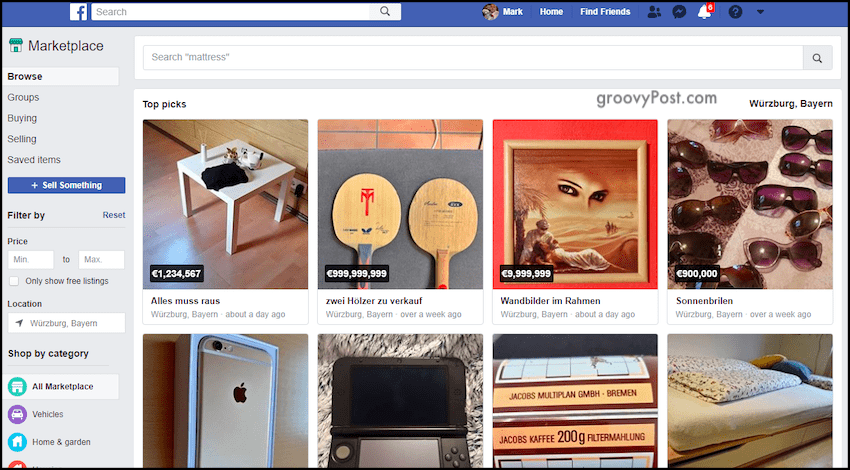 Once you have bought a bunch of items through the Marketplace, you are going to need a job to pay for it all. Luckily, Facebook has you covered with the Jobs section. This section seems to be used more in places like the US and UK than in other location. Here in Germany (especially in my area), only a few companies use it. With no listing fees, I’m sure it won’t be long though before other companies pick up on Facebook as a useful recruiting tool.

Applicants can subscribe to new job postings in particular categories. When applying for a job, public information on your Facebook profile (such as education and employment history) will be shared with the employer. 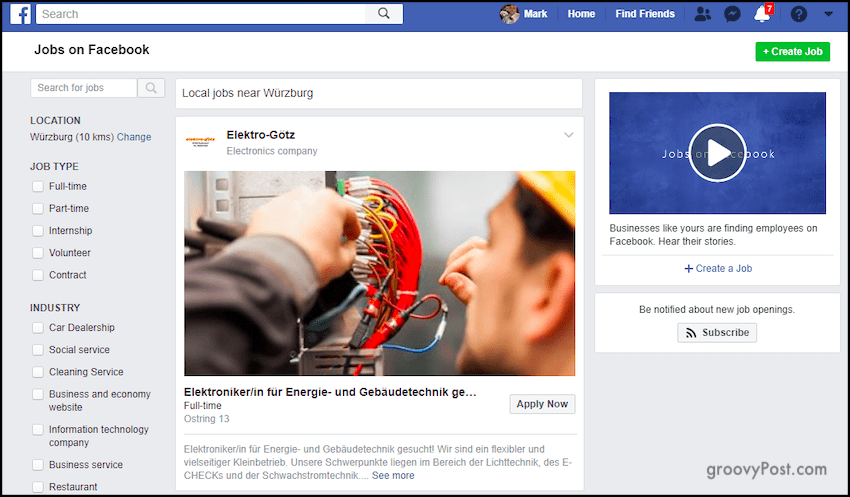 If you are an individual or a company looking for a professional presence on Facebook, then Pages is the area you need to go to. There is one caveat, though. You must have a personal account as it acts as the “admin” for the business page.

Virtually every entrepreneur and company worth their salt has a Facebook page. Unfortunately, for reasons only known to them, Facebook recently decided to reduce the exposure of Page posts. I have nearly 200 followers on my page but each post is only seen by no more than 20-25 of them. For more people to see it, I have to pay to “boost” the post. Which has upset a lot of people, including my bank manager. 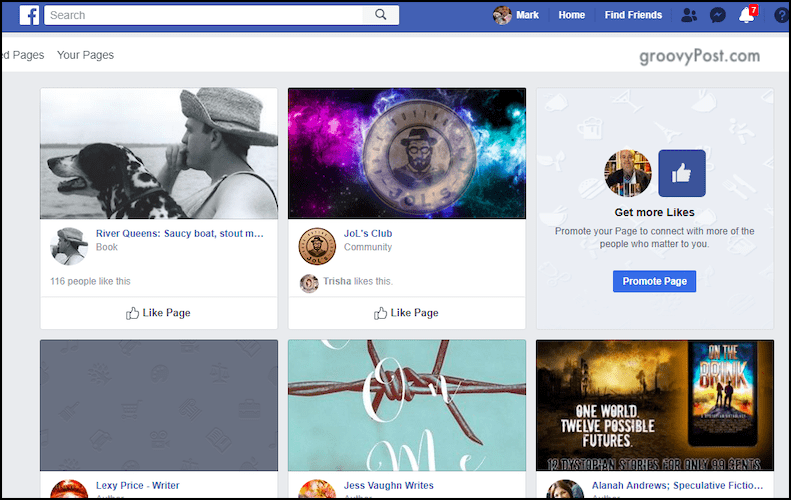 As the exposure of Page posts is reduced, the exposure of Group posts has gone up. It seems Mark Zuckerberg (Facebook’s evil genius CEO) wants you to be more in a group instead. Until he changes his mind again, that is. Groups are pretty much the new Internet forums. Facebook groups run the gamut of every possible interest you can think of. In the extremely unlikely chance, there is not a group for your interest, you can easily start one for free.

This is one I really like. When you are scrolling through your news feed and you see interesting links being posted, you quite often don’t have the time to read them immediately. So Facebook has set up a Pocket/Instapaper-like system where you can bookmark Facebook posts. 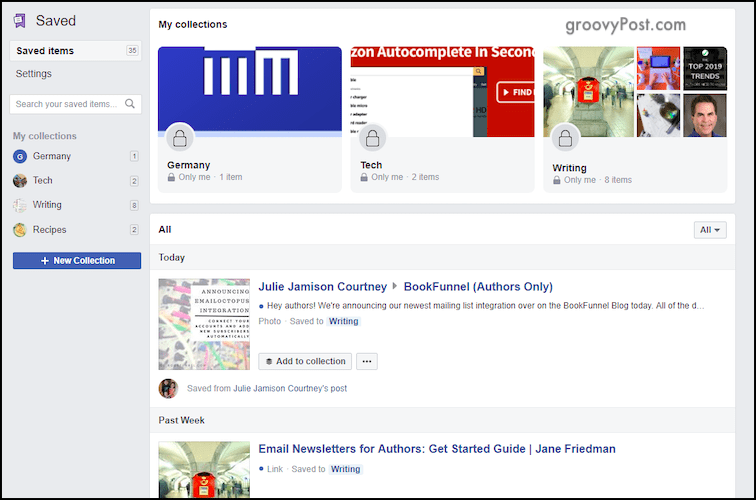 They are put in their own “saved” section where you can retrieve them later as a list. You can make categories to organize those links as well. Although Pocket is my main bookmarking system, I also use Facebook’s “Saved Items” as a secondary form of saving. 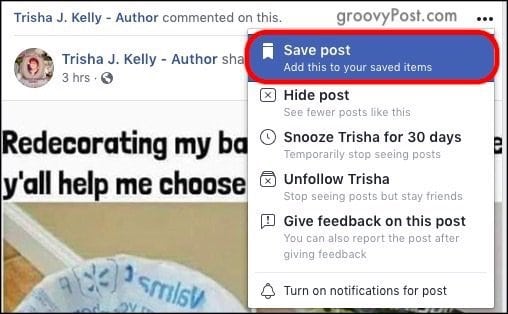 Finally, the other main Facebook feature worth looking at is “Events“. If a page you subscribe to or a person you follow has an event planned, it will show up in “Events”. This could be something as small as a cookie sale or something as big as a music concert. You can mark that you are going, not going, or are “interested”. Your followers will be told and theoretically, a discussion with your followers can then be had about the event. 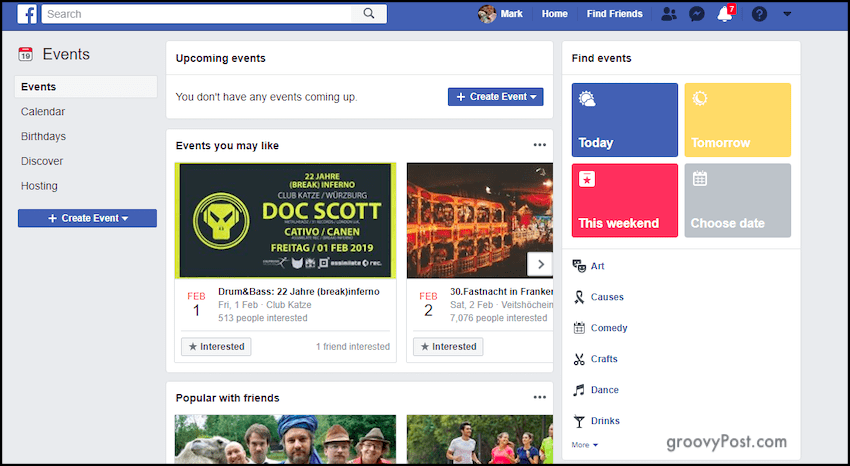 As I said, this is not a conclusive list of all the features in Facebook, but it provides a pretty good overview of what Facebook is and what you can do with the site. Just be careful what personal information you reveal on the site because everything is used against you for advertising. Facebook is not exactly renowned for its privacy standards. Also, when it comes to Facebook Messenger, you don’t need an actual personal Facebook account to use it. For more on that, read our article on using Facebook Messenger without a Facebook profile.