You have been able to purchase or rent movies from YouTube for several years, but recently YouTube started offering free but ad-supported flicks.

YouTube quietly added about 100 movies from major studios to its service recently. You don’t need to be a YouTube Premium or YouTube TV subscriber to watch them either. In fact, you don’t even need to be signed in to your Google account. The included movies aren’t the latest blockbusters but are free to watch if you’re willing to put up with a few ads. Some of the titles include all the Rocky films, Terminator, Legally Blonde, Zookeeper, and others.

To watch the free flicks, head to the YouTube Free to Watch section. If you’re watching from a browser, you will have all the other free titles in the right playlist pane, and choosing the next free film to watch is just a click or tap away. 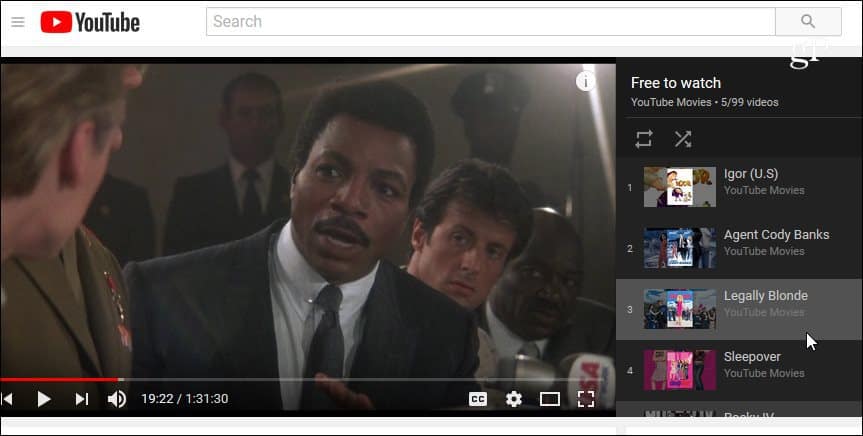 If you’re using the mobile app, you will find the “Free to Watch” section in the Trending category under the Movies & Shows section. The number of ads isn’t too annoying either. And it doesn’t require you to watch a series of ads before the movie starts playing. It also lets you skip ahead and back while watching. 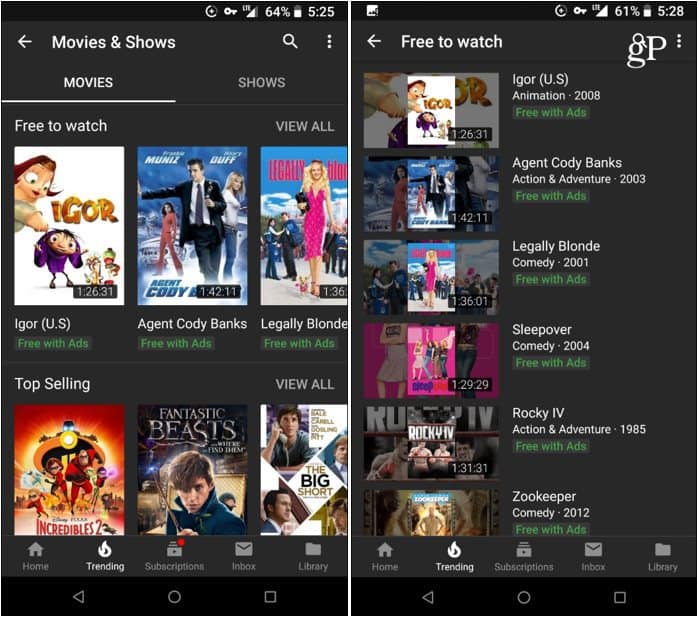 The move by YouTube to include free movies looks like an attempt to keep up with other services that offer free streaming flicks. Last year when The Roku Channel launched, it included free ad-supported films on its Roku devices and TVs. And Roku just recently started offering its free streaming channel on the web for everyone to access.

You have been able to rent or purchase movies through YouTube for some time already. Similar to purchasing movies from other services like iTunes or Amazon Prime Video. But it hasn’t offered a free option until now. And Since YouTube is a Google property, your video library will sync whether you purchase movies from the Play Store or YouTube. It will also sync movies you’ve bought on other services via Movies Anywhere. And because of that, a good trick to know is that you can view your Google Play movie collection on Apple TV – which, unlike Roku, doesn’t have the standalone Google Play Movies app for tvOS.

When it comes to finding free streaming films, it’s also worth mentioning that you can view free ad-supported movies and TV on Vudu as well. But it offers a lot more films than either YouTube or Roku. It has titles broken down into different categories like Action, Dramas, Comedies, and more. Of course, you’re not going to get the latest Marvel blockbuster or popular Oscar-nominated films, but they are decent titles and the best part is they are free.