Losing your data when you accidentally delete a file without saving or the app crashes, now you can recover it with a built-in auto-recover feature.

Ever had an Office program crash and then lost the entire project? With Office 2010 that never has to happen again. When you exit an Office 2010 application without saving, by default you’ll be prompted with a dialog window such as the one below.

Update: This article was originally written for Office 2010. For modern versions of Office 2016 or higher or Office 365 check out our updated auto recover article. The apps may look different but the basic idea is the same.

If you don’t save your file or your app crashes, you’ll be able to recover it later using the default Auto-Save features of Office 2010.

Note that at the time of this writing, this feature only works for the following Office 2010 Applications:

For this guide, I’ll be using Microsoft Word 2010 so there will be a slight variation if you are using PowerPoint or Excel.

How To Recover an Office 2010 Document, Spreadsheet, or Presentation 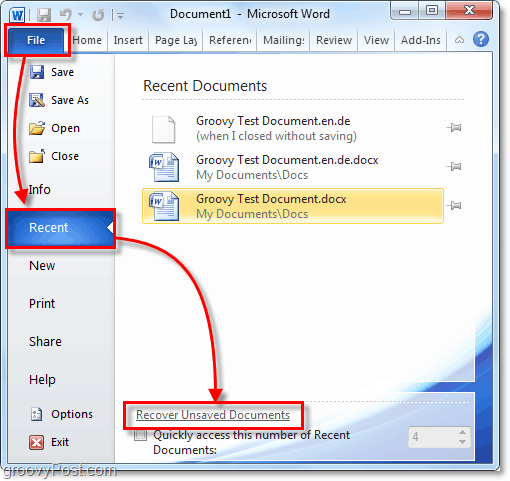 2. Select the document that you were last working on and didn’t save. Looking at the Date modified can greatly aid you in finding the correct one. 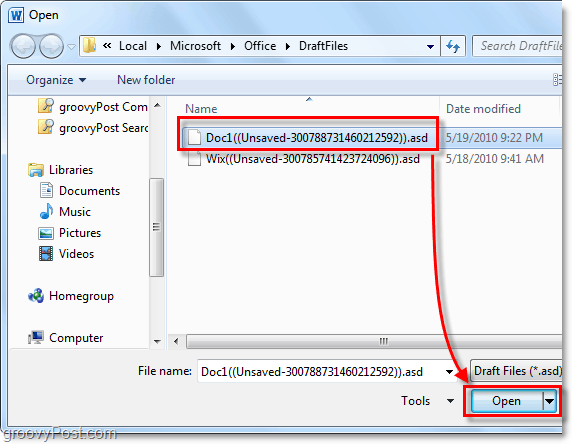 3. When you open the unsaved file it will alert you at the top that this is an (Autosaved Version). Also in the middle of the document you will see a warning that you are currently in a Draft Version and if you don’t save the file it will be automatically deleted in four days. 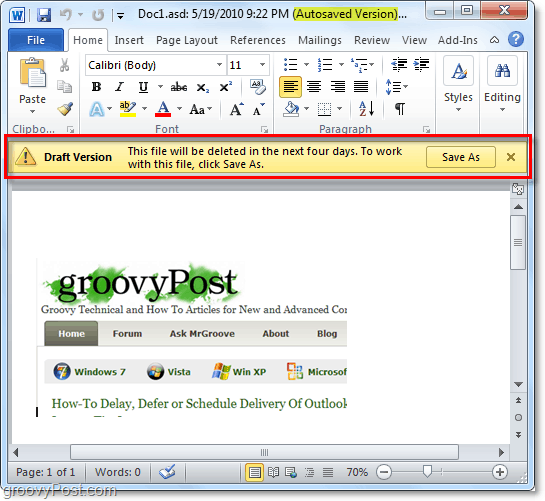 That’s all there is to recover unsaved Office 2010 docs. Next, we’ll look at recovering an Office 2010 file that had been saved once before, but the most recent version was never saved.

4. In the File > Recent tab you can find existing recent documents that have been worked in but not saved the last time they were exited.  Look for the (when I closed without saving) tag below the file name, this is the latest version that was auto-saved.

Revert To A Previous Version (AutoSave) Of An Office 2010 Document, Presentation, Or Spreadsheet

5. The Auto-Save part of Auto-Recover will automatically save your file at the specified time increments.  To revert back to one of these Auto-Saves, Click File > Info and then select a version by clicking on the Timestamp near the Manage Versions button.

Note those previous auto-saved versions typically delete when you close the file. 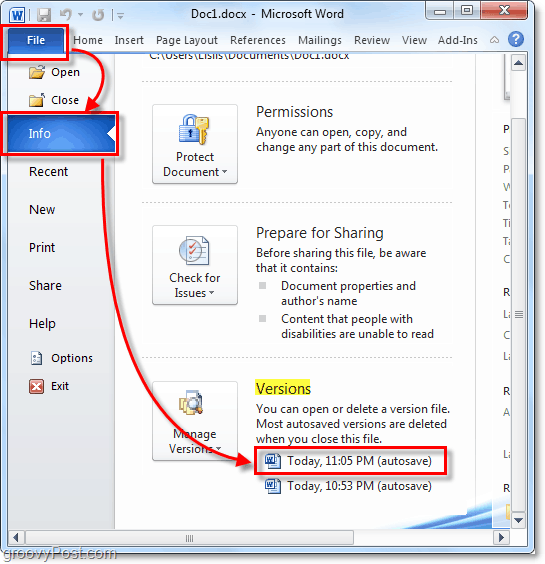 6. You can adjust how often an Auto-save (AutoRecover) occurs, as well as where these temporary files store. Let’s look at those, click File > Options.

7. In the options menu click the Save tab. Here you can customize how many minutes between Auto-Saves and also the format and location where files save. I like to set mine for three minutes because once you get really going on something, three minutes of work is a pretty big deal to lose.

Overall AutoRecover is a groovy feature of Office 2010 under PowerPoint, Word, and Excel. It has saved my butt a few times and hopefully now that you know how to use it it can help you and your colleagues!