If you’re annoyed by getting trailers for other Netflix shows while you binge a series, here is how to opt-out of ads and future test features.

Netflix recently started testing out a feature to display ads for other shows while you were bingeing on a program. For example, binge-watching Jessica Jones or Stranger Things would get an in-house trailer ad for other Netflix original programs between the episodes. These trailers only run while credits are rolling, but they are not skippable. As you would imagine, this upset many users and led to some fiery discussions in a popular Netflix community on Reddit and users complaining on Twitter and elsewhere.

Since Netflix has roughly 130 million subscribers, you just might not have noticed the ads. Netflix is always testing new features for its service on a trial basis on a select number of its users. However, the problem is everyone is included in the testing program by default. Here is how to stop ads if you’re seeing them and ensure you’re not included in any future testing.

To opt out of Netflix’s tests, you need to open a browser on your computer, tablet, or phone. Head to Netflix and log into your account. Then click on your icon in the upper-right corner of the screen and choose Account from the menu.

On the Account Settings page, scroll down and click or tap the “Test participation” link. Then you will see the following screen where you want to toggle off “Include me in tests and previews” and click the Done button. Or, better yet, you can head to Netflix.com/DoNotTest and flip the switch off. 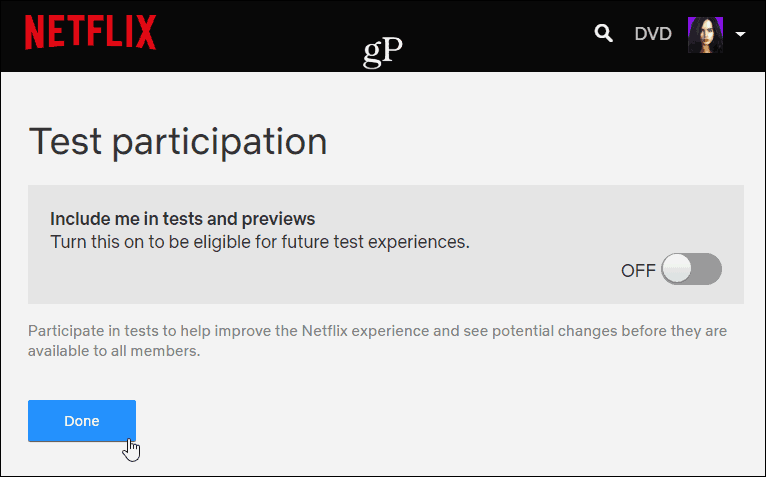 That’s all there is to it. Now you won’t be included in tests the company does with accounts. Currently, if you are getting the ads, this will stop it. At least, until the company decides to roll that out to everyone as a standard experience. But this will also make sure you don’t get involved in other future test programs.

But to be fair, you also won’t be able to test out some new features early. For example, the company recently started rolling out a new TV experience with a Sidebar for easier navigation. Users who were opted into that test program and eligible have been using it for a while already. But if you like things how they are and don’t want to bother with new features, opting out of the test program is your best bet.