The Windows 10 April 2018 Update is causing a lot of headaches for users but is still being pumped out at a rapid pace. Have you upgraded yet?

Microsoft started rolling out Windows 10 version 1803 “April 2018 Update” on April 30th and this is a strange update, to say the least. There are essentially two camps, those who update to 1803 and have no problems at all, and those who update and have several issues. What’s more, as noted by Paul Thurrott and citing data from AdDuplex, the update is rolling out more rapidly than previous Windows 10 feature updates.

We have advised that you should consider holding off on the update because of the number of issues people have been reporting. However, the company has issued two cumulative updates since the initial release. The most recent – KB4100403 Build 17134.48 — seems to have fixed BSOD issues users were having with SSDs from Intel. Still, we continue to get reports from readers who are having various problems with the update. There is no single issue and the problems vary between manufacturers, devices, and system setups.

With so many problems being reported, it’s hard to believe the update is being rolled out at such a rapid pace. For more details on how the April 2018 Update has been pumped out to various machines, check out this AdDuplex report. And for an interesting conversation regarding this odd update process, and reasoning behind it, I recommend checking out the Windows Weekly podcast. 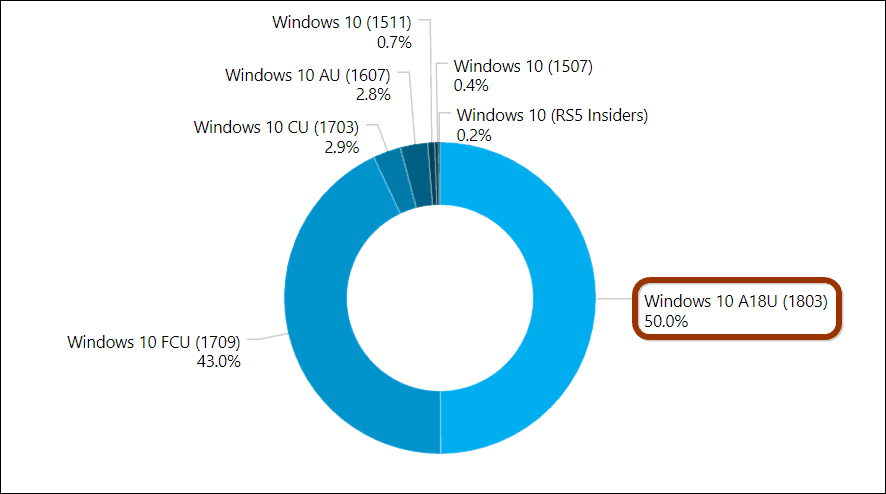 I did have a problem when updating my main production computer — a Dell XPS 8700. After the upgrade finished, there were no Windows Store apps — including an absent Edge browser. In fact, there was no Windows Store at all. There were also some missing icons and a few display issues. I thought I would need to rollback the update, but to fix it, I did a hard reboot (not a simple restart). Sometimes that is the easiest fix when it comes to troubleshooting PC issues. I completely powered it down, disconnected all devices and cables, including the power cord. Let it sit for five minutes, reconnected everything, and then fired it back up. I have had no problems since.

So, the question is, have you updated to Windows 10 version 1803 yet or you holding off a bit longer? If you have updated, let us know how things are or aren’t working. If you did experience issues, what were they and how did you fix it? Since the last cumulative update was released are you seeing easier updates? For more discussion and troubleshooting advice, make sure to join our Windows 10 Forums.