Microsoft this week rolled out a new cumulative update for Windows 10 version 1803, aka ‘April 2018 Update’ and here’s a look at what to expect.

Microsoft this week has released new cumulative update KB4100403 for Windows 10 1083 April Update. There are no new features to report in this latest update, but it does include quality improvements and bug fixes. It will also bump your build number to 17134.81. Here is a look at what is included in this latest update.

Here is a list of the fixes and improvements included in this latest update:

If you’re running 1803 you should get the update automatically within a few days, or if you want to stay on top of things head to Settings > Update & Security > Windows Update. Or, you can download the stand-alone version from Microsoft Update Catalog and manually install it. There are a few known issues with this update, so make sure to read the full developer notes for the symptoms and workarounds.

Remember, a restart will be required to complete the install process. After it is finished, and you log back in, hit the Windows Key and type: winver and hit Enter. You will see that your build number has been bumped up to 17134.81. 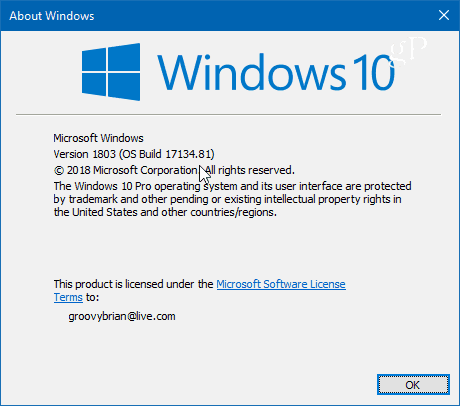 If you are still holding off on updating to 1803, you might want to consider still doing so. While there are fixes for some of the known hardware issues with 1803 (including SSDs), this might not be “magic” update that will fix issues so many people are experiencing – namely app and driver issues. Still, if you do go ahead with the jump, let us know how things are going and if you’re having issues, check out our Windows 10 Forums for more discussion and troubleshooting advice.