With each new feature update of Windows 10, Microsoft typically deprecates or removes some apps and features. Here’s what’s going away for 21H1.

Microsoft announced the general availability of Windows 10 version 21H1, aka May 2021 Update, yesterday. And while it’s a smaller release than usual, some features are being deprecated or completely removed. This is a fairly common practice, and usually, the features that are removed are ones you forgot about already. Then again, sometimes, some common apps or utilities are deprecated. For example, Windows 10 versions 1803 and 1903 had quite a bit removed.

Microsoft published a list of features that got deprecated or removed from the May 2021 Update, including Legacy Edge – support was ended on April 13th. And XDDM-based remote display driver. Here is the full list of removed features:

This is a list of features the company has labeled as Deprecated. That means the company is still including them in Windows 10; however, it will not be working on them moving forward and are more than likely on the path to be removed in the future. Here is the full list of deprecated features:

The list of removed or deprecated features is minimal this time. So, if you’re worried about losing a “must-have” feature, chances are, you’re not going to lose it with this install. The latest update will be a staggered rollout, with the most compatible devices getting it first, followed by the rest. The best way to check is to go to Start > Settings > Update & Security > Windows Update and click the Check for Update button. 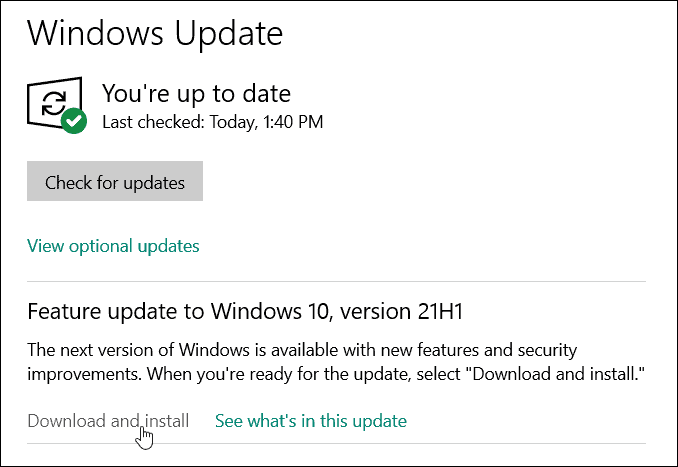 But, of course, like other previous feature updates, you can install it manually. You can do that by heading to the Windows 10 Download page. From there, you can use the Update Assistant tool or the Media Creation Tool. For more, check out our article on how to install Windows 10 21H1 May 2021 Update.