Microsoft recently celebrated 25 years of its popular Office suite of programs. Here’s a look at where it started and how it has evolved into what it is today.

Two of Microsoft’s most famous crown jewels, Windows and Office, are celebrating anniversaries this month. Windows, the world’s most popular and most widely used desktop operating system, hit the big 30 while Office, famous for its standards, Word, Excel, and PowerPoint, is now 25. The world’s most popular productivity suite is said to be running on over 1 Billion devices worldwide. After 25 years on the market, it looks like Microsoft is just getting started. With Office 365 in 2011, Microsoft expanded Office from the standard desktop applications into a platform for Servers, Apps, and Services. 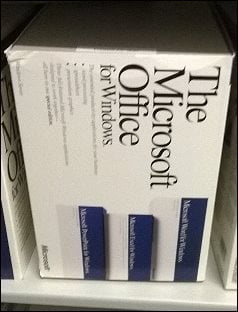 The history of the suite is of particular interest. Microsoft’s entry into the applications market started with a precursor to Microsoft Excel called Multiplan, a spreadsheet application developed for computers running the CP/M disk operating system that was later ported to MS-DOS, Xenix, and the Macintosh. The success of Multiplan ended with the rise and dominance of Lotus 1-2-3, once a favorite spreadsheet app that has since faded into the history books – no pun.

Microsoft made another attempt at the spreadsheet market with a new application called Excel, released in 1985, and Microsoft Word (1983), formerly called Multi-Tool Word for Xenix systems – Microsoft’s initial distribution of the UNIX operating system. The success and popularity of new Office applications such as Microsoft Word and Excel eventually led to the introduction of the productivity suite market with competition from brands such as Novell WordPerfect Office, Lotus SmartSuite, and IBM Works. Speaking of Works, an early attempt to this growing market started with integrated packages called Works. Integrated packages included word processing, spreadsheet, database, and contact manager utilizing wizards to accomplish tasks like preparing a letter or a resume. 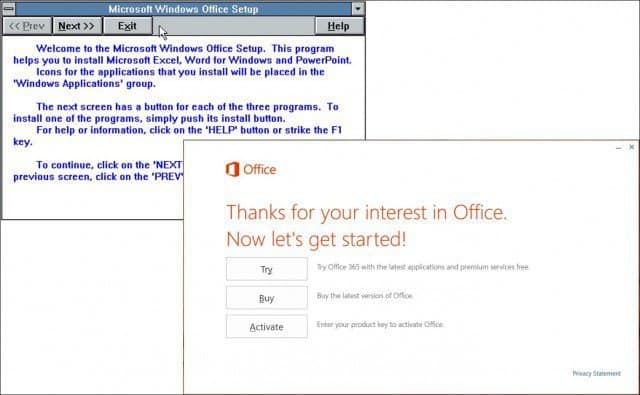 Installing Office then and now.

Versions of Microsoft Office for Windows

Microsoft Office version history has not been consistent over the years due to a combination of point releases and superstition, resulting in the missing 13.0 release.

Suites and integrated packages targeted different users. Suites, in particular, were more expensive but offered significant value by bundling popular applications that would cost upwards of $1,500 if bought separately versus $600 for the entire suite. Integrated packages were cheaper with essential features targeting budget users with particular needs, and they used fewer system resources. In 1989, Microsoft came up with the idea to offer Microsoft’s most popular desktop applications as a bundle called The Microsoft Office for Macintosh. Included were Microsoft Word 4.0, Excel 2.2 and PowerPoint 2.01, and Mail 1.37. In 1990, Microsoft released a version for Windows, which bundled Word 1.1, Excel 2.0, PowerPoint 2.0.

The value of the early version of Microsoft Office was the price and having three powerful apps together. The programs themselves were not well integrated; as you can see below, Word, Excel, and PowerPoint don’t have the uniform interfaces as in later versions. Neither do menus nor functions work the same across apps as they do today. Forget about technologies like Object Linking and Embedding (OLE), which weren’t well established, although a pre-cursor called Dynamic Data Exchange (DDE) was supported. 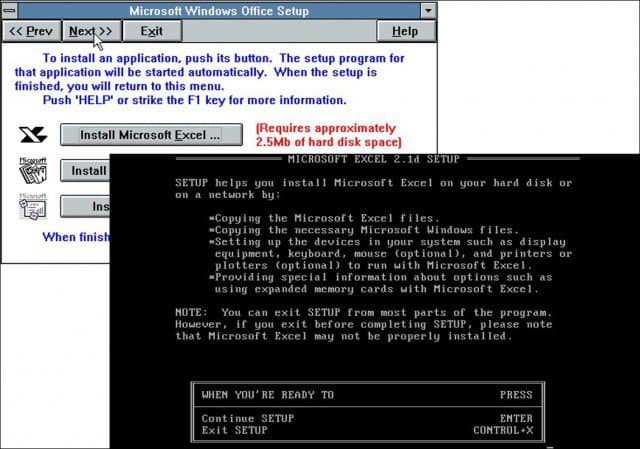 Back in 1990, installing Office was an involved process. Office version 1 for Windows used a graphical installer for the initial setup phases, but each app required installation separately and used a DOS-based interface. Each application also required a little knowledge of paths and commands for placing the application files on disk. This probably suggests how separate the product teams were from each other. Word would install its files in C:\ while Excel would require that you create your path and folder. Today, installing Office is a set it and forget the process; all you need to do is go to your portal and choose your platform, and that’s it. 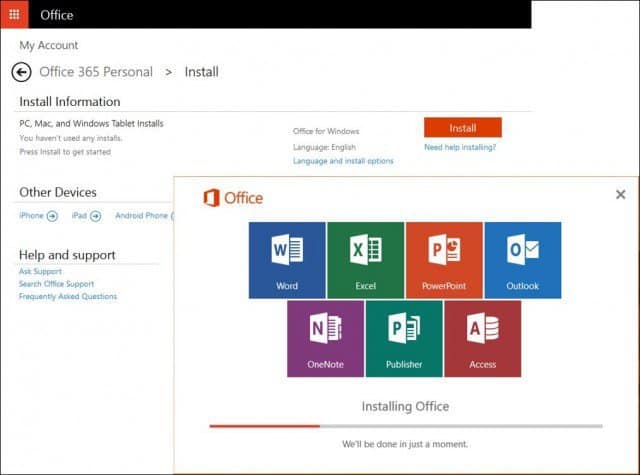 The licensing has changed, too. Now you can install Office on up to 5 computers for just $10 per month. Office 2000 Premium at one point cost $800, and this was just a single license. Over the years, the suite has grown in features and capabilities, from the early days of toolbars and drop-down menus to including Task Panes and the ability to Save to the Web. The most dramatic update to Office came with Office 2007, released in late 2006, which featured a new user experience called the Ribbon. The Ribbon exposed and provided quicker access to features and functions in the applications that had grown to over 1500 commands.

Over the years, new Office modules have been developed and discontinued. Some of these include InfoPath, Team Manager, Liquid Motion, Vizact, FrontPage, and my favorite, PhotoDraw, which I still use for vector art illustrations. The suite has also grown into a family of apps, some of which were not originally developed by Microsoft. One of the most popular apps in the suite, PowerPoint, which is used by most persons as a noun when describing presentation graphics, was originally developed by a company called Forethought, which was originally the makers of the FileMaker database management system before becoming a subsidiary of Apple. Other apps such as Visio were also bought and added to the family. Early Office family applications Project and Publisher are still developed and widely used in small businesses and enterprises.

OneNote, a note-taking application introduced in 2003, has become one of the most important modules in the suite in recent times. Described as a companion for Microsoft’s early Tablet PC efforts, OneNote has expanded beyond its Windows-centric roots to a free solution available on multiple platforms to an integrated modern application bundled with Microsoft’s latest operating system Windows 10. Today, OneNote is used for gathering and managing information in a variety of formats; these include videos, audio, pictures, ink, and text. 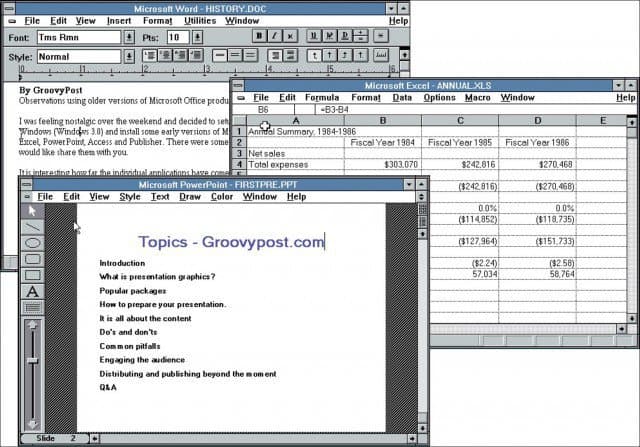 Word, Excel, and PowerPoint back in the day 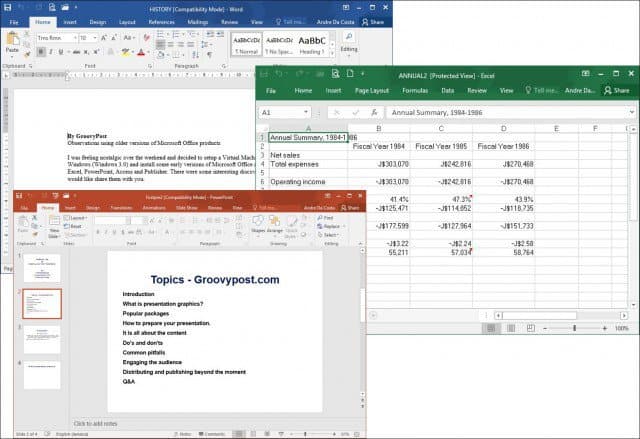 Office today is a highly integrated platform for applications, services, and servers. Running not just on Windows but modern platforms such as OS X, iOS, and Android. The suite’s popular apps, Word and Excel, still maintain their tradition of compatibility. I prepared content in the first versions included with Office and open files in the 2016 versions with little issue. Because of the significant changes in file formats and security over the years, there is a need for explicit approval when opening files in binary formats. Still, it can be done with little effort. Early versions of PowerPoint are incompatible with modern versions requiring that you open and save in previous versions such as PowerPoint 97 to maintain compatibility. 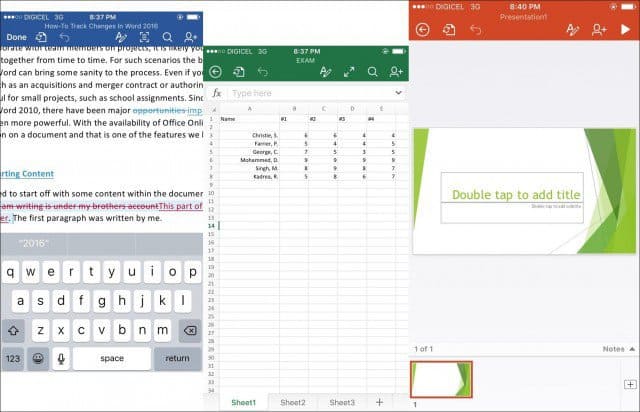 Microsoft CEO Satya Nadella describes Microsoft Office as Microsoft’s most important API. Services and intelligence tools such as Skype, OneDrive, PowerBI are a critical part of the future of Office. It has become a connected platform through servers such as SharePoint and Exchange and tools that make discovering and analyzing information powerful and useful through newer services such as Office Delve, connecting people to the right information when they need it. 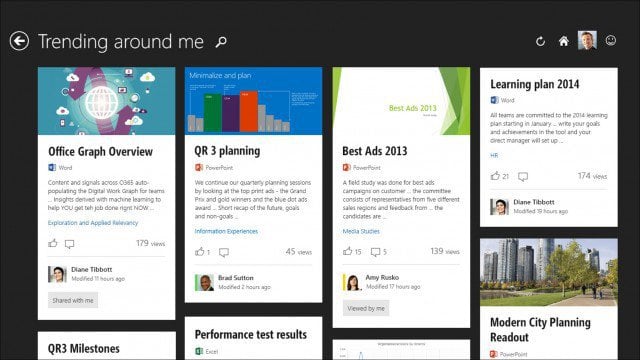 Office Delve – a glimpse into the future of the platform

My thanks to Amy Stevenson, curator of the Microsoft Archives, for providing resources included in this article, such as the Office version 1 for Windows software. If you want to learn more, check out http://www.microsoft.com/visitorcenter