The VIZIO M-Series Quantum 65-in Smartcast TV includes everything you need for watching streaming content. The picture quality packs a punch and all for an affordable price.

Just a couple of years ago you would need to spend $1,000 or more for a large screen 4K TV. But today, you can pick up 4K displays in a variety of sizes for well under that. VIZIO is a leading television manufacturer which has been making high-end and budget sets for years. And VIZIO’s newest M-Series Quantum 65-inch display packs a punch with a quality picture and Smartcast technology under the hood.

The VIZIO M-Series Quantum 65” 4K TV produces a quality picture on a 2160p display using technology such as Quantum Color with one billion shades of color, Active Full Array with up to 20 local dimming zones, UltraBright 400 for detailed highlight and lowlights, and Clear Action® 360 with 120Hz Effective Refresh Rate backlight scanning. It also supports all 4K HDR standards including HDR10 and Dolby Vision. 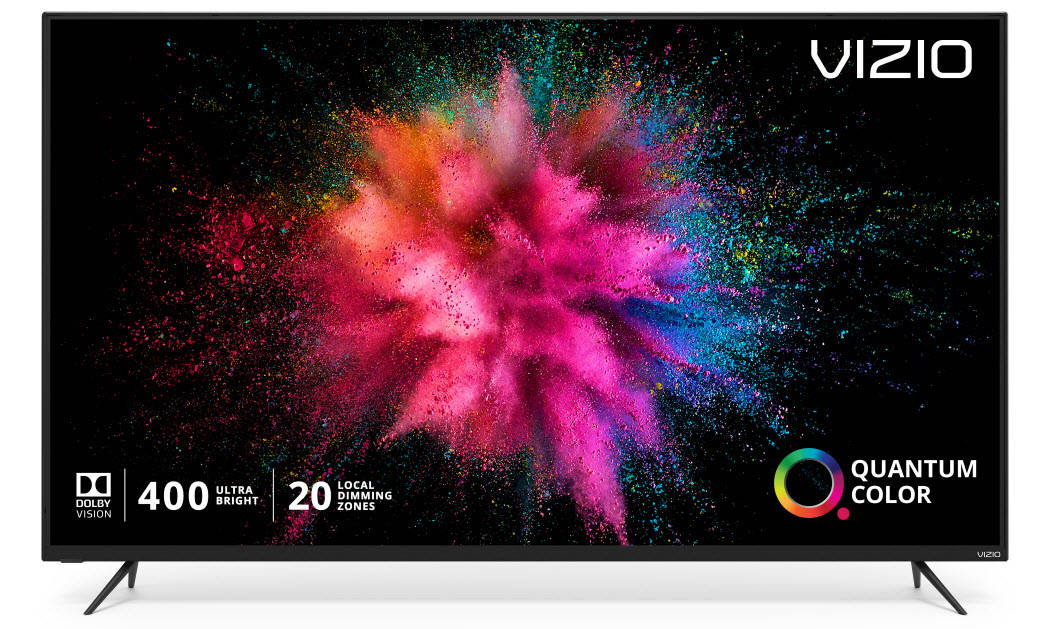 But there’s more. Since an update to its software, it includes Apple’s AirPlay 2 and HomeKit support, too. If you live in the Apple ecosystem, it’s awesome. There’s no need to purchase a separate Apple TV box to stream content from your iPhone or iPad to the big screen. On top of that, it works will all three major digital assistants: Siri, Alexa, and Google Assistant. 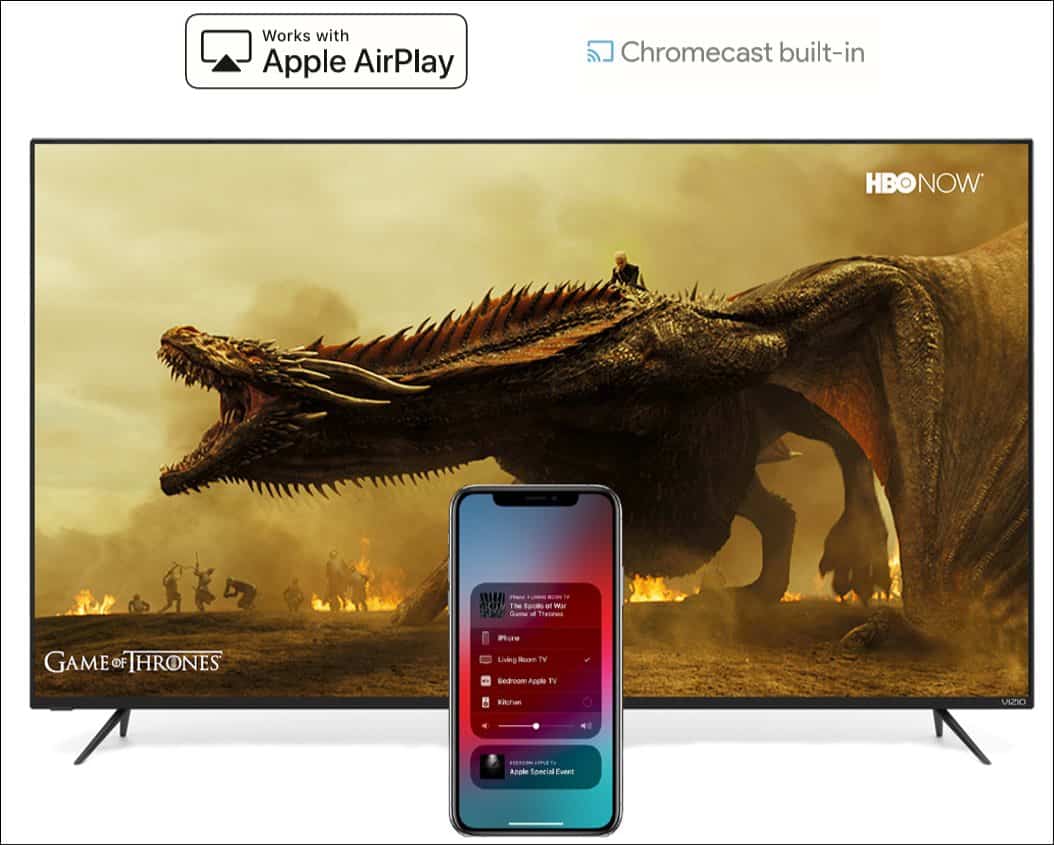 The VIZIO Quantum runs the latest version of its Smartcast 3.0 with a built-in Chromecast. With Smartcast, all you need is a Wi-Fi connection and after a brief initial setup, you’ll be streaming video content from the included popular mainstream apps like Netflix, Prime Video, Hulu, and others. Although, HBO Now and Showtime are notably absent. But since it includes Chromecast and AirPlay 2, you can stream those and pretty much any other app’s content you need to the big screen. Not to mention your music, videos, photos, and more from your phone or tablet – Android or iOS.

Content on the top row automatically updates with different shows and movies over time. Some are free and others require a subscription, but when you click a title from the home screen, it takes you directly to said service and starts playing the title. And if you need to find something, the search feature is simple and easy to use. Just query show or movie title view and it will show you every app that it’s available on. It also tells you if it’s free or will cost money.

In addition to the apps, it includes a feature the company calls WatchFree which is a partnership with Pluto TV. It provides hundreds of free streaming channels with live and on-demand news, sports, movies, TV shows, music, and more.

While it has plenty of features and tons of apps, the native Smartcast experience is sluggish compared to modern set-top boxes. But this is common among Smart TVs that I’ve tested. Whether it’s a Fire TV, Roku or Chromecast powered set, oftentimes you’ll get a more responsive experience by plugging a modern box in instead.

Of course, the responsiveness should be improved with future software updates. And, if the speed of Smartcast is an issue, note that there are four HDMI ports where you can connect other set-top boxes or sticks. I ended up connecting the latest 4K Roku Ultra. Still, if you just want to get a TV and not worry about another device, this set will serve your needs.

There’s really something to say about a 4K large screen TV. Especially one with the color depth of the M-Series Quantum. I have viewed all sorts of content on it. I watched live sports over-the-air and the picture was crisp and well defined. Watching UFC and WWE events feels like you have a ringside seat. Of course, streaming movies and TV shows in HD and 4K HDR (there is still a lot of streaming content that’s not available in 4K) and both looked amazing as well. The color is rich and vivid with deep shades of black. And seeing all the action on a 65” screen really allows you to see more detail when fast action is happening.

I’m not much of a gamer, but I do play games on Xbox One occasionally. With the large screen and quality of the display, that has changed. I am enjoying playing titles like Star Wars Battlefront II and Call of Duty series. VIZIO’s Quantum Color technology and local dimming really shine here. Game colors are vivid and bright with a balance of deep uniform darks. Unfortunately, I only tested the Xbox One S with it, but I’d imagine 4K games on the Xbox One X look even more spectacular. Of course, the Xbox One S does support 4K content (sans games) and everything looked just as good as other devices I connected to it. And I have a lot of sticks and boxes, so the extra HDMI ports come in extremely handy.

VIZIO has been using the same remote for the past several years. In fact, it’s essentially the same remote that came with the VIZIO SmartCast M-Series we reviewed a few years ago. It does the job, but it’s not great. The buttons aren’t responsive, and it just feels like cheap plastic. Finding the right buttons in the dark is not ideal and you’ll often end up hitting the wrong ones.

However, VIZIO does offer a SmartCast Mobile™ App for iOS and Android. It allows you to use your phone as the remote, launch apps, and browse and launch content directly. And, of course, you can see your phone in the dark. Not to mention it makes logging into your accounts far easier than using the physical remote and on-screen keyboard. 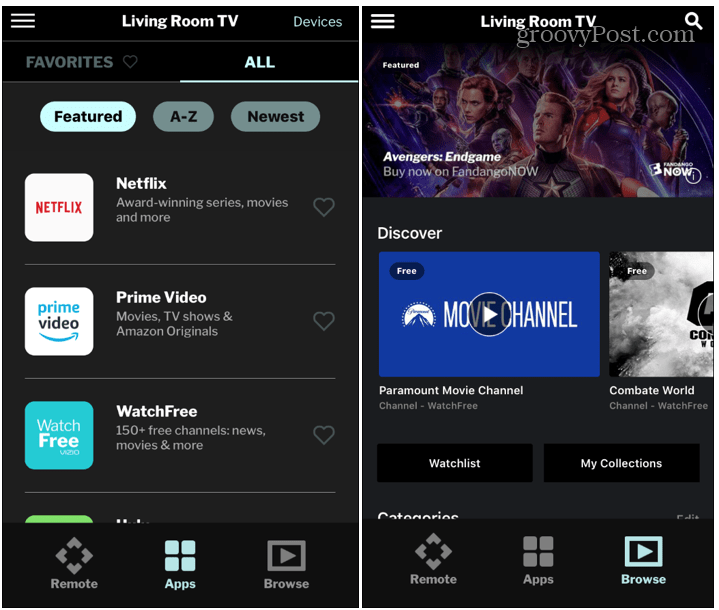 Tweaking the picture quality and calibration while watching TV is simple through VIZIO’s menu system. You’ll want to change things up based on your preferences. Hit the Menu button on the remote to get a list of different picture settings. You can also change picture settings on the fly by hitting the Pic button on the remote. That allows you to easily switch between different picture modes. 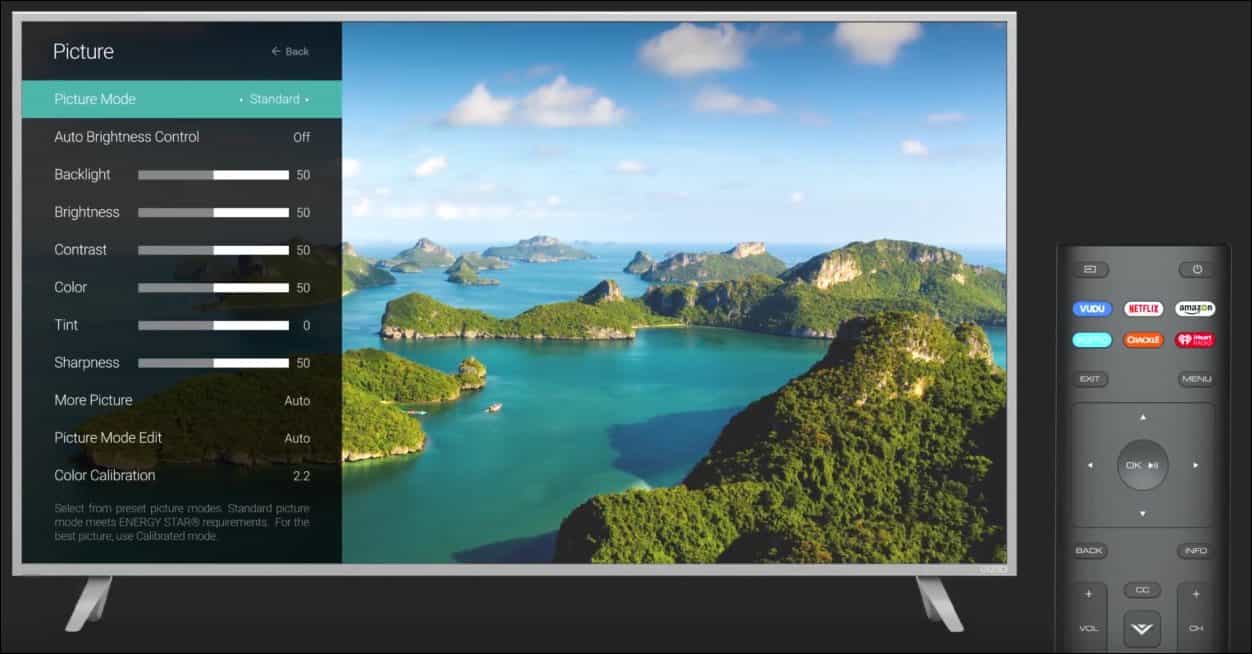 Another thing that’s nice about this TV is it includes a full guide that you can access and read on the screen. There isn’t a huge instruction manual that comes with it. Not sure how to hook up a device via Bluetooth? Just pull up the on-screen guide and follow the steps. You’ll want to use the guide when first getting acclimated to the TV.

Now, the audio is a weak area for this TV in my opinion. Especially in larger rooms. And upon turning it up to a listenable level, it starts to distort. You will want to get a separate soundbar or hook it up to an AV receiver. I connected a Pioneer 4K A/V receiver and set it up in a 5.1 configuration. This is where ARC through HDMI provides quality audio through the 4K receiver. It allows the audio from OTA television and other HDMI-connected devices to come through in full surround sound. If you have a legacy receiver, it also includes the stereo analog audio output ports.

The design is simple and straightforward. This TV’s bezel is one of the thinnest in its class which leaves more room for picture real estate. It has an anodized extruded aluminum frame and a modern base with precision micro-texture and aluminum legs. The thickness is minimal so it won’t stick out much if you wall-mount it.

It comes with four HDMI ports (HCDP 2.2, HDMI v2.0b 600MHz) on the right-hand side so you can plug in any type of set-top box. A USB port so you can view content from a flash or external drive. It also includes Audio Out ports to send the TV’s sound to an AV receiver. And it has a Coaxial input for cable or OTA Antenna as well as an Ethernet port if you want to hardwire it to your internet. The ports are directed out the side and the bottom for easy access.

It is worth noting that for the best picture viewing, you need to be sitting in front of the TV. If you’re viewing it from the side at an extreme angle, the brightness and colors do wash out. But this is common for many 4K UHD TVs in this class. Its big brother, the P-Series Quantum doesn’t have that issue. It looks great no matter where you’re viewing it from. Of course, that model costs $1,000 more. This is just something to keep in mind if you have a room with wide seating

Despite the sluggishness of Smartcast, overall, the VIZIO M-Series Quantum offers excellent picture quality for the price. The VIZIO M-Series Quantum 65” retails for $789.99 and you can find deals on this set at big box stores like Best Buy or you can pick one up at your local Target, Walmart or Amazon.  But if 65-inches is too big, note that the VIZIO Quantum M-Series comes in 43”, 49”, and 55” sizes, too.

Special thanks to VIZIO for the sponsorship of this article