MyIPTV is a cable cutting service that uses the SOPlayer app for multiple platforms and provides television, movies, and other forms of media for a paid monthly fee. As part of our Cord Cutting series, we’ll look at the service I discovered to meet my cord-cutting needs. This is not your traditional live OTT streaming service like YouTube TV or PlayStation Vue. But there are some things that MyIPTV does really well, and some areas where it is lacking. So let’s take a look at what you can expect.

There are quite a few things to talk about in this review, but first, let’s look at what kind of channel features the service offers. The number was actually quite surprising. First, of course, there’s the main U.S. lineup, as well as a Canadian, Spanish, Sports, UK, Local, and a lot more. I think I hit around channel 3500 before it stopped and looped back to channel one.

Now granted, not all of these channels were great or should really go towards that high of a count. There are a lot of sports channels that were dedicated to specific games. There are also large gaps between channel numbers. For example, after channel 565, it suddenly jumps to 600 — there’s nothing in between those 35 numbers. The main thing is, it has every channel I looked for including every live sports game going on at the moment. 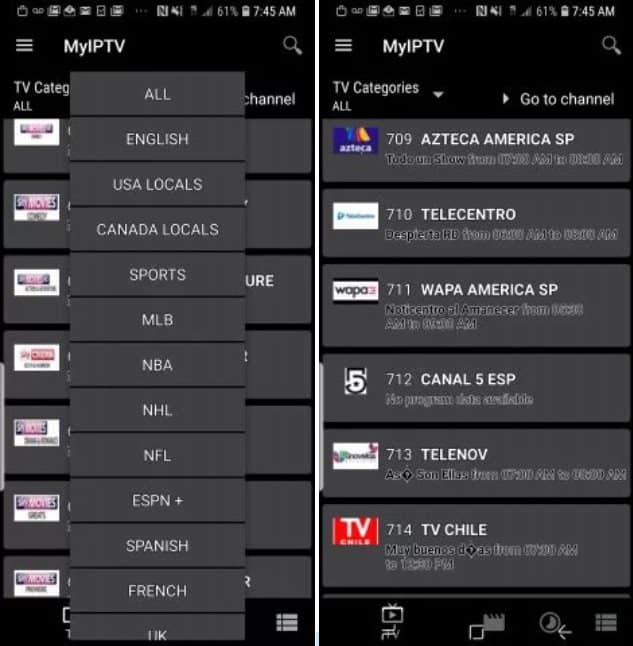 The picture quality of live TV is pretty good. I noticed many channels in 1080p HD or 720p HD, which was consistent across the main line-up of the first few hundred channels. Some of the one-off channels in the high number range that display in 480p quality, though. And some local channels were just plain not available while others were low quality in 480p. I reached out to technical support (an experience I will talk about in a bit) to ask, but the agent didn’t have a clear response. From what I gathered, it could be a supply-demand thing; if the demand for HD content on specific channels is low, they might not show it.

Below is what it looks like across my Android phone. I have to apologize to a few people about the channel choice here, but I love PBS. I checked for buffering and other issues, which is one of the first things I look at in any internet TV service. Basically, comparing it to other services like YouTube TV and Hulu Live. There wasn’t any buffering here, but there were a few channels that wouldn’t work on my Fire TV Cube but would work on my smartphone or vice versa. 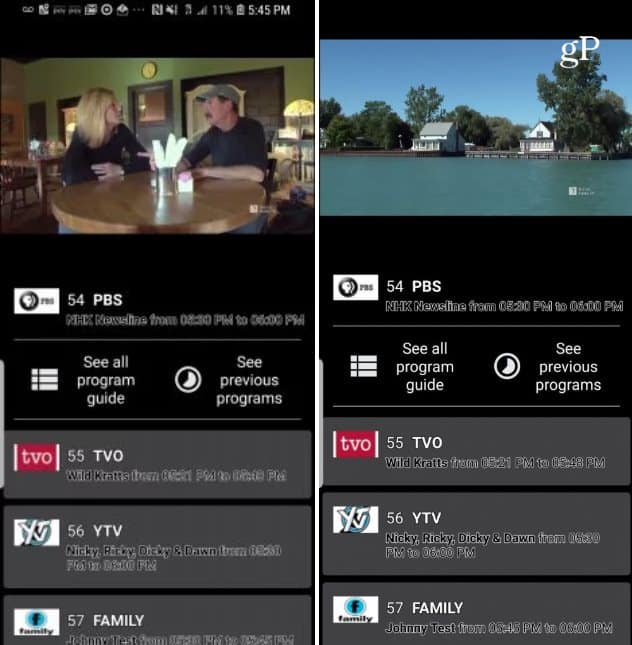 Onto the Electronic Programming Guide or (EPG). This is probably the weakest part of the service. While it looks and functions like a normal cable TV setup, the program data is frequently missing, delayed, or completely incorrect. There is a nice preview window on some devices that plays the currently selected channel while you scroll up or down. I want to say it was right about 70% of the time, but I don’t really know for sure. There are too many channels to keep track of on this service.

On the phone, the EPG was nice and quick and could fly up and down across channels. However, on the TV and set-top-box portal, it wasn’t as good. There is no Page Down or Page Up functionality that I could find, and that’s a bummer when you’re dealing with hundreds of channels.

A MyIPTV subscription costs $25 per month for 4 screens. I have one gripe with the price. There are no options. You sign up for four screens, or you sign up for zero. There is nothing in-between. For someone who wants to watch TV on the phone, that could be a deal-breaker. But when you compare it to the $40 that Hulu Live charges or $50-$70 for DirecTV Now, it’s competitive.

Getting support is about what I’ve come to expect from other online companies. There is a phone number, but it doesn’t seem to have human helpers. The website has a full-chat module on every page — which is the main way to contact the company. My brief talk with a customer rep was a professional experience with a good English speaker. I couldn’t tell if the support rep was from an outsourced center or not. And they were able to answer my questions, and I didn’t have to wait in a queue. Instant chat support is a big plus for me. But chat support is limited from 9 am to 9 pm. After hours, it goes into an offline ticket mode.

In the set-top-box portal and the Android app, the interface is fantastic. I tried it on a couple of different Fire TV devices, a Samsung S8, an Android TV, and a TVIP v605 box. The different content areas are easy to find — especially on streaming boxes. It mimics the traditional cable box grid. The responsiveness was bad on my first-gen Fire TV Stick, though, as it lagged a lot. But it was snappy on my Fire TV Cube and newer devices. Out of all the devices, my favorite setup was on the TVIP v605.

One thing I will recommend straight away. On Android, open the settings (swipe from the left edge towards the right) and turn on the Black Theme. It is a lot easier on the eyes than the ugly default one. Unfortunately, this happens also to be right next to the “default player” setting as well. I found that it needed to be switched on or off depending on device compatibility to watch programming.

One thing I’m accustomed to from my cable days is DVR for catching up on shows. A DVR also comes in handy for zipping past those pesky commercials. I believe at one time, I was paying TiVo a premium fee because it could automatically detect commercials and skip past them.

The Catchup system on MyIPTV is similar to a traditional DVR, but not quite. Instead of recording the shows to your box, they are all streamed from an online cache. You don’t select which shows you want to record either. Instead, it records every single show for seven days out. This may sound like a cool option, but the channels are limited. In all, I only counted roughly 100 channels that had the “Catch up” feature enabled. This is likely based on the popular and most-watched channels. 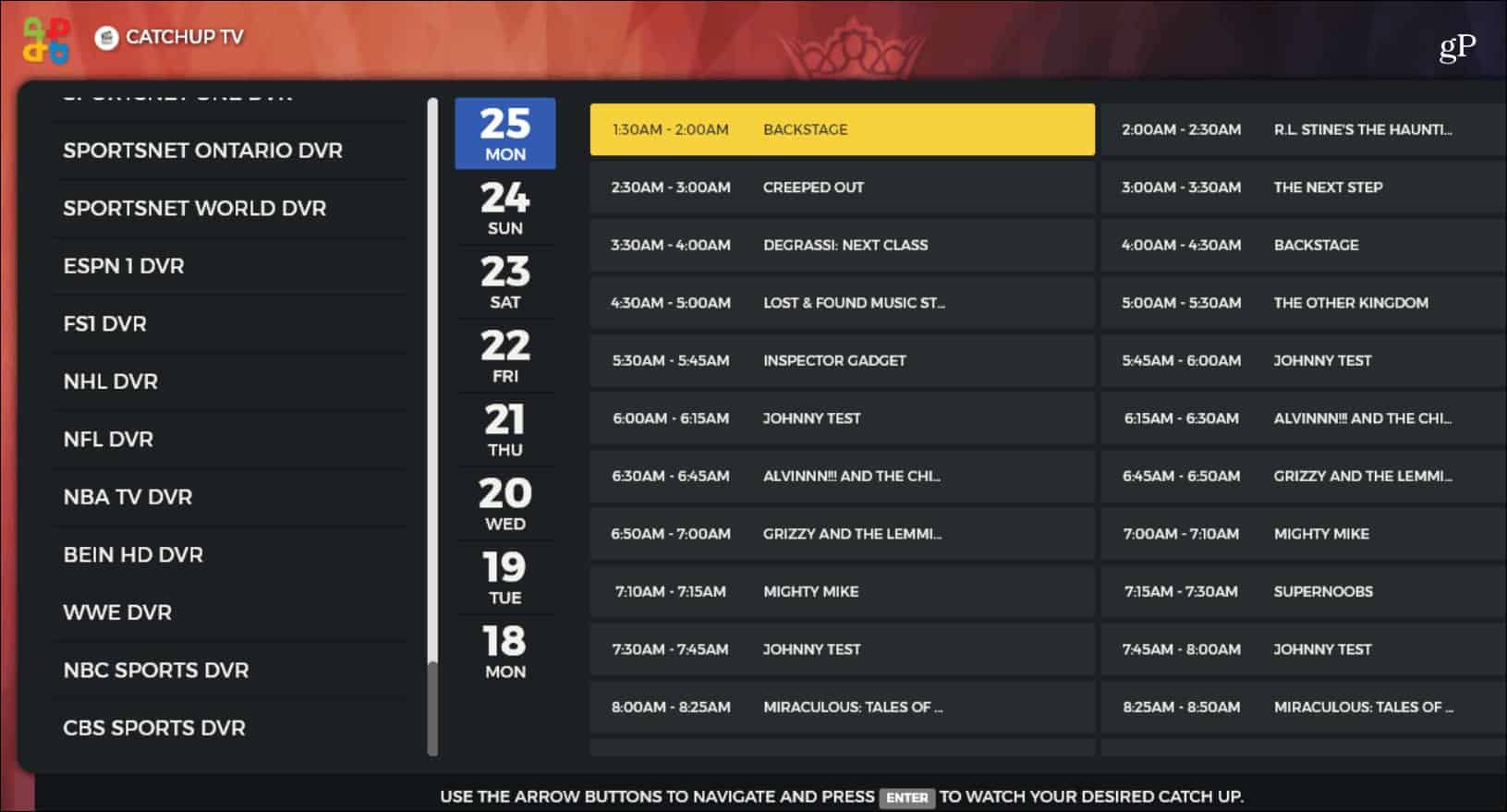 I’ll be candid. I’m not a Live TV viewer; commercials have killed it for me. On-demand is where it’s at. MyIPTV has just about every movie I searched for. That is until I started looking for some of the older titles. I like the old classics, and they are missing. Now when it comes to the new movies, new tv shows? I found every show, including a decent “Kids and Family” lineup.

I was looking at the VOD section on different platforms, and while the interface is different, the content is the same. Titles are separated into different categories. On the Android phone app, this is a drop-down menu. The set-top-box or TV version of the app’s similar but the categories run across the top of the page.

The picture quality of the on-demand content is good, with little to no buffering. In addition, you can instantly fast-forward or rewind movies without any hesitation, which is an improvement from my experiences with Netflix or Direct TV Now. I did run into a problem with the service on my T-Mobile phone, though. The on-demand content wouldn’t load when on 4G data, but it would work fine over WiFi. I then tried a VPN over 4G, and it could load the on-demand content without issues.

MyIPTV offers a vastly comprehensive service. I did notice quite a few quirks. But with the price comparatively lower at $25 per month for four active devices — which comes to $6.25 per screen. It also has more channels and movie titles, too which makes up for some of the inconsistencies. Anyone can check it out for themselves without much hassle as it has a 3-day trial that doesn’t require a credit card to try.

Activation requires a three-step process of signing up, downloading the SOPlayer app, and logging in. Setup instructions can be found on YouTube. If not for the kid’s channels and the on-demand section, I’m unsure if it would be a good fit for casual viewers like myself. But any cinephile or tv show binger could easily get their money’s worth.