The new Kindle Fire HD tablets are now available to purchase online and retail stores across the country. It’s hardware has been substantially upgraded over the original, and its customize Android 4.0 ICS OS sings in comparison.

The new Kindle Fire HD tablets are now available to purchase online and retail stores across the country. It’s hardware has been substantially upgraded over the original, and its customize Android 4.0 ICS OS sings in comparison. Here’s our first look at the main features of the new 7-inch version of the new tablet.

After unboxing the Kindle Fire HD, I was immediately impressed with the form factor of it compared to the first one. It’s much lighter and thinner than the original. It is wider though, with bigger sides around the bezel. This makes it more difficult to hold in one hand like a book, but makes it nice when holding in landscape view while watching video, navigating the UI and browsing the web. 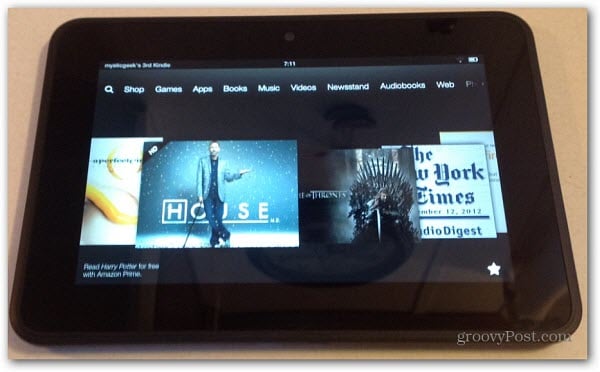 Setting it up couldn’t be easier. Like the first Fire, it’s connected to your Amazon account, so all of your movies, books, apps, and music will be ready for you out of the box. 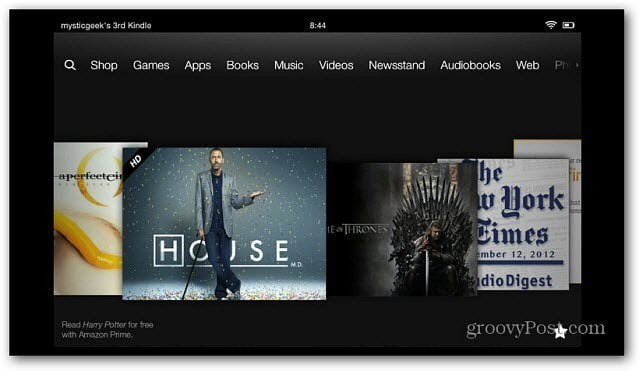 This interface is Amazon’s heavily customized version of Android 4.0 Ice Cream Sandwich and it much faster than the original one. One odd thing about the Lock Screen is you need to swipe from the right to left to unlock it – which is opposite of any other tablet or device I’ve used.

If you swipe from left to right, it brings you into the Android store. While subtle, I can’t help but think this was done intentionally by Amazon to trick get you into its store faster.

True to its word, the Kindle Fire HD does come with ads enabled too. But you can opt out of this for a one time fee of $15. Whether or not I decide to opt out will depend on how annoying the ads end up becoming. 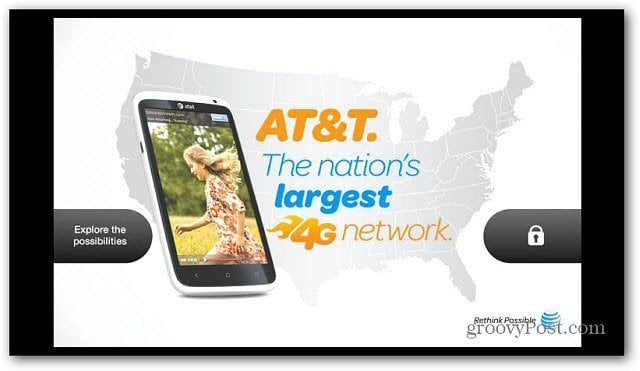 Of course you can view any content on the Kindle Fire HD in Landscape or Portrait view. When you flip the tablet around, it switches to either view smoothly — unlike the original which was slow. 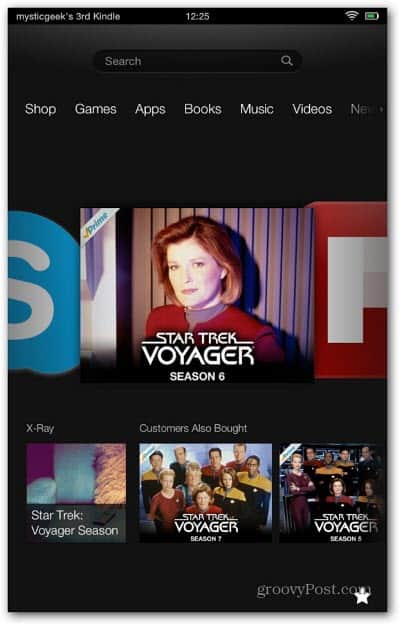 The videos app works just like you’d expect. It has the Carousel like UI where you can access your Playlist, Watchlist and Library of purchased videos. Searching the video store is a seamless experience for Prime and non-Prime content. One annoyance I noticed is it takes longer to load the video thumbnails than it does on other devices. 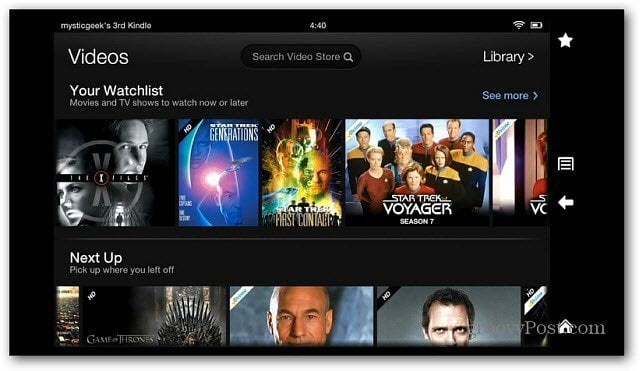 Of course the HD content will cost more, take up more space on the device and eat more bandwidth. 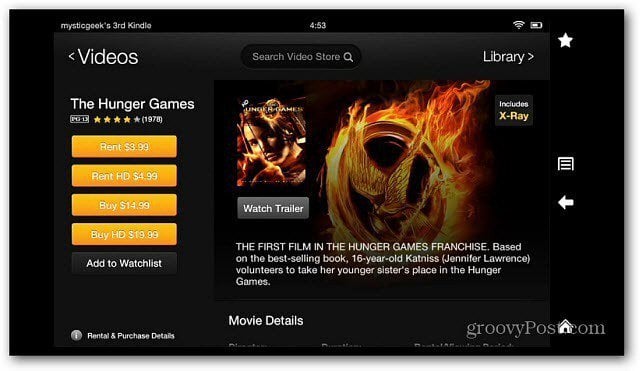 Video playback was exceptional for both HD and SD content. The 7” display is at 1280×800 resolution.  It has a HDMI out port so you can easily connect it to your HDTV. But, you’ll need to purchase a micro-HDMI cable separately, just like the headphones. The screen quality is leaps and bounds over the first one. 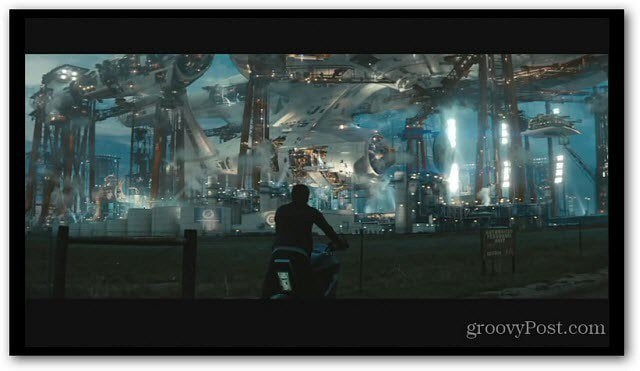 Another groovy new feature for Video is Amazon’s X-Ray technology that incorporates IMDB. While watching a movie, just tap the screen to bring up X-Ray to see which actors are present. Then you can tap an actor to view their IMDB profile or check out the entire cast at once. 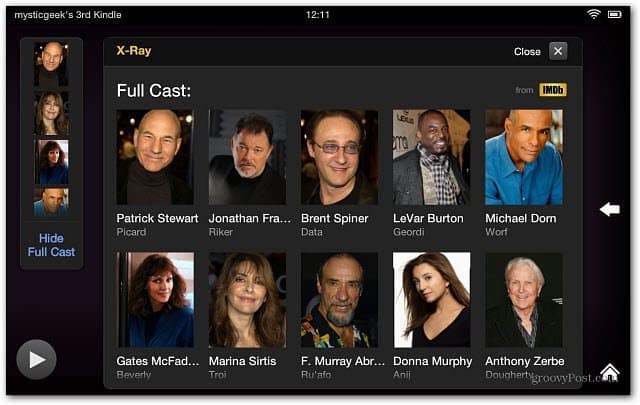 The music app is just like what you’ve come to expect from Amazon. You get 5 GB of free storage on the Amazon’s cloud for your tunes, and music purchased from its store doesn’t count against that limit. Like with the original Fire, you can create playlists and download music to your device. Plus, with Amazon Scan and Match you’ll have access to your collection wherever you have a WiFi connection. 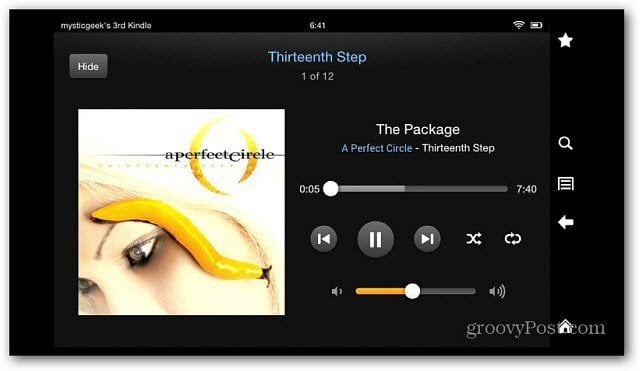 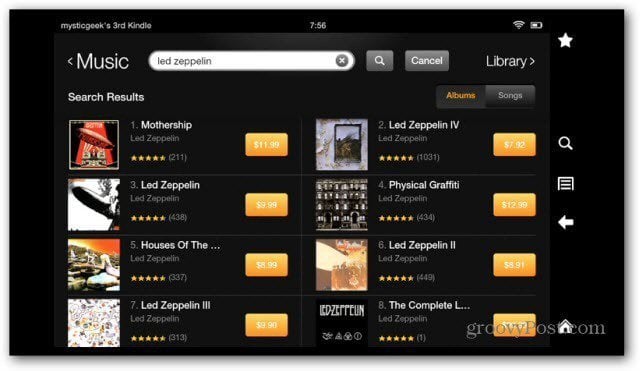 There’s plenty of reading to be done on the Fire HD too. Turning pages isn’t clunky like it was on its predecessor. Flipping through books is fluid with no stutter or hesitation, and the same is true with magazines in the Newsstand.

Another new feature on the Kindle Fire HD is Audiobooks from Audible.com. You can get get the Audible app for the first one, but now it’s built into the OS by default. 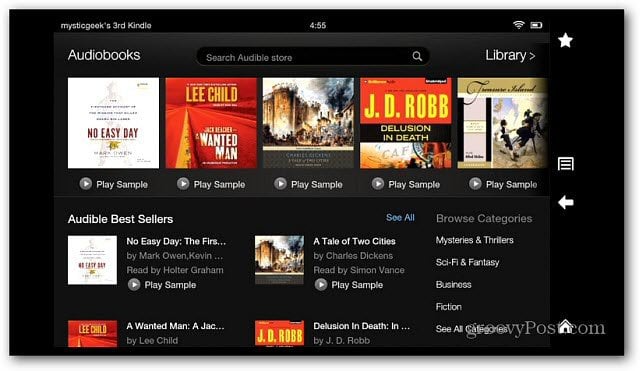 The selection of apps is still lackluster. While built on Android, Amazon controls which apps are available through its App Store. No Google Play Store here folks, unless you root it and install Google Play. 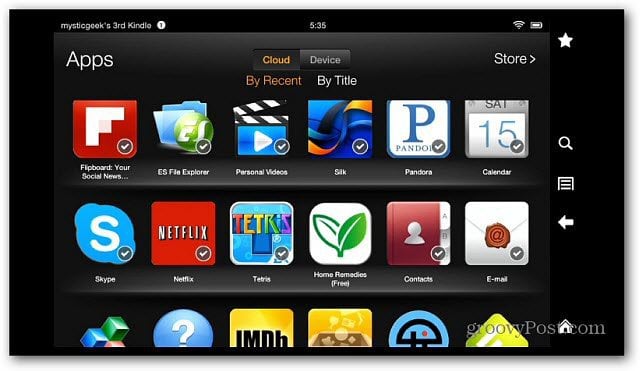 Amazon’s Silk Browser has been upgraded and works more fluidly than the first version. One thing that has changed with this version is Bing is the default browser now versus Google in the first. If you prefer Google’s search engine, it’s easy to switch and make it your default. 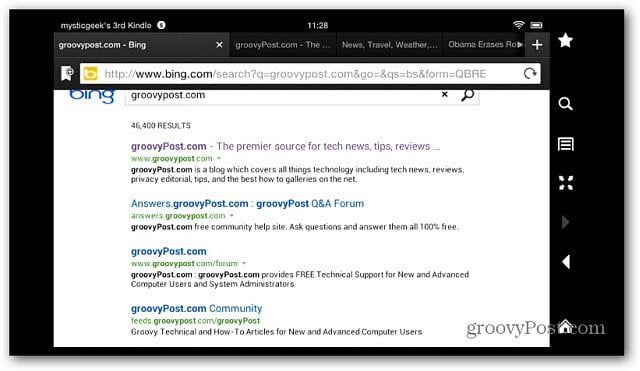 The Dolby Digital Plus sound through its dual-driver stereo speakers is impressive for a small tablet. I wouldn’t use its speakers for long periods of music listening, but the quality is great for watching video online or using the Read to Me feature. With Dolby Digital Plus, the sound from it comes at your from different angles and covers a broader area around the device. The speakers are much better than any other portable devices I’ve listened to.

It doesn’t come with headphones though, you’ll need to get your own. I don’t find that to be a problem as the first thing to go when I get a new gadget is toss the stock headphones because they’re usually cheap and sound horrible. I connected it to the receiver on my home theater set up via HDMI and movies and music sounded tight, crisp and powerful. Connecting it to a receiver is like having a pre amp in front of the audio input.

It has volume buttons on the right side of it and you can adjust it from a control on the screen too. 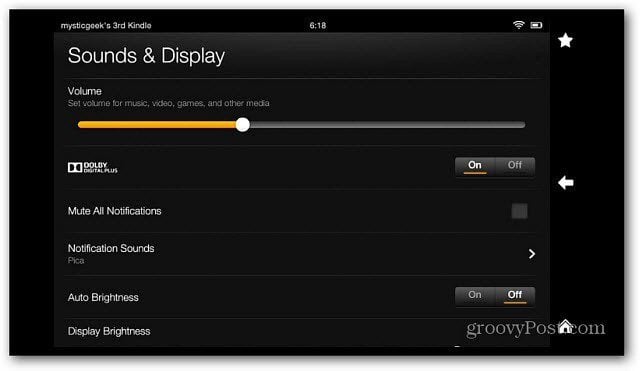 Hopefully this gives you a good idea of what to expect from the Kindle Fire HD 7 inch tablet. There are plenty of other features not covered in this article, but we’ll definitely have a lot more covering it inside and out. Stay tuned!

This would be a great first tablet for anyone on a budget who doesn’t own one yet. Or, if you do have the original, you’ll be very happy with this new version. While there are areas for improvement, the Kindle Fire HD is a superior device compared to the first version, hands down.