Microsoft rolled out yet another new update for Adobe Flash Player in Windows 10 (KB3133431) which should fix problems with the previous security patch.

When Microsoft rolled out the Windows 10 Patch (KB3132372) to patch up 19 exploits in Adobe Flash Player for IE and Microsoft Edge, a lot of users complained that some of their apps no longer worked. Today a new update, (KB3133431), was rolled out to help resolve those issues. 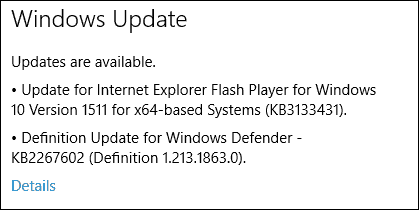 Here’s the summary of the update according to the Microsoft Support page:

This update resolves a problem in which Adobe Flash Player does not load correctly in applications that are running in Internet Explorer or Microsoft Edge and that have Flash Player embedded. This problem occurs after security update 3132372 for Adobe Flash is installed on Windows 10.

The update addresses the issue in Windows 10 Version 1511 (November Update) and previous versions of Windows including Server. Adobe released the following notes on its page:

In today’s release, we’ve updated Flash Player ActiveX for Windows XP, Windows Vista and Windows 7. This release addresses a problem with Flash Player improperly loading in applications that have it embedded. We are working with Microsoft to provide this update to Windows 8 and Windows 10 users as soon as possible.

You also need to restart your PC to complete the update process. But you can always schedule the reboot for a time that works best for you. For more on that, read our guide on how to schedule Windows 10 Update restarts.

As mentioned in our previous article, Adobe Flash is just riddled with holes that keep getting patched and is the reason there’s such a big migration to the safer and more reliable HTML5.

We got several comments from readers that the last patch broke a lot of apps like IncrediMail and caused other issues with their computers. Let us know how this patch works for you and if it resolved or creates more problems.