SAN FRANCISCO – Even a week after his death at 56 — Apple chief Steve Jobs surprises. Always the showman, his last product — an iteration on the current iPhone 4 announced and widely panned a day before he died — ends up wowing.

Even in the absence of a major architectural upgrade in the form of an iPhone 5 — the 4S is selling like crazy. The press forgot one thing. There are millions and millions of us Apple iPhone 3G and 3GS users who would love a new contract — maybe with Verizon or Sprint? — and a better camera. The iPhone 4S turns out to have an excellent camera. For the holidays, marketwise at least, Apple is right on the money.

The day Jobs died October 5, 2011, I wondered if he had seen the headlines panning the iPhone 4S.  I hoped not. It wouldn’t be a fitting thought to end his recent insanely impressive string of successes.

Now I wish he could see this. The final surprise!

Steve Wozniak, who told me he always gets there early and tries to be first in line for a new Apple product, pictured below.

Thanks, Cult of Mac, for snapping this great photo. 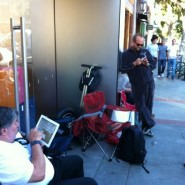