Usually, when a major corporation such as Microsoft makes a public relations gaff of this caliber, most run for the hills. Not this time 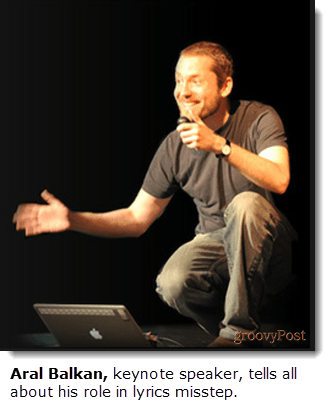 Usually, when a major corporation such as Microsoft makes a public relations gaff of the caliber of its presentation at the Norwegian Developers Conference, everyone runs to hide behind some innocuous press release apology. But Aral Balkan, the conference’s keynote speakers, on the plane back from Oslo, wrote an analysis/apology for his cursory role in the wording of the production. The entire piece, published in What,where,why.me, is well worth reading in its entirety. But we’ll just cut to the salacious part:

“Microsoft Norway–one of the main sponsors–was to kick things off with a product announcement for Windows Azure. As part of this, they had written a song and the song was going to be played before the party began. And I had actually heard the song once before.

“On Tuesday evening, I was at the venue, rehearsing and generally worrying about the song I was going to start my talk with the next day. At the end of my rehearsal and tech check, I stayed behind to give Kjersti (who helps run the company that organises NDC) a few pointers in presenting. Once we’d run through her opening speech, she told me that Microsoft Norway had written a song for the after-party and asked if I’d listen to it and watch the video. I was dead tired and just wanted to get back to the hotel but told her that sure, I’d watch it.

“The Microsoft Norway rep, let’s call him Alex because I’m not entirely sure what his name was, played the song for us and my very first thoughts were that it could have been far worse–at least it sounded all right and the robotic voice was female (which was good, right, right?) I mean, I was judging it by Microsoft’s coolness standards here – you have to try pretty hard to beat monkeyboy Ballmer. But then I heard a line that began with ‘I’m a developer’ and ended with ‘my penis.’ I remember turning to Alex and asking: ‘Did I hear that right? Did it really just say “I’m a developer” and end with “my penis?” He shook his head, yes.

“I inhaled… and proceeded to ask him if he realised how sexist that was. I may also have used the term ‘male gaze’, I don’t remember. I quite like that term.

“You’re telling people that only men can be developers. Because only men have penises. You’re talking to an all-male audience. Do you see how that’s sexist?’

“Alex shook his head, to signal that ‘yes’, he could see that now. And then told us that they just hadn’t considered it before.

“And to his credit, Alex did ask me what they could do to make it better.

“In retrospect, I wish I had asked to listen to the song again and that I’d paid full attention to what that sentence said but I was tired and wanted to go back to my hotel room to rehearse for my own talk (I ended up sleeping at around 1AM that day and was up again at 6AM to prepare for the opening.) What I didn’t realise at the time was that the full lyrics were ‘The words “micro” and “soft” don’t refer to my penis.’ Instead, I heard ‘I’m a software developer blah blah…’, zoned out, then ‘blah blah my penis.’ And, in an effort to help, I told them that they could at least include ‘or vagina’ in the slides (which were mirroring the words of the song).

“The idea was that at least it would acknowledge that women are developers too. It was a band-aid for a train wreck but I thought it might at least signal that they had become aware of the issue and that they were trying to make amends. Needless to say, this whole conversation took place in a minute or so, it wasn’t hours of discussion. I was on my way out, and I wanted to get back to my room and rehearse my opening keynote. And, since I hadn’t heard the bit about ‘micro’ and ‘soft’, the end result, when they did change the slide to include ‘or vagina’, didn’t make much sense. As Todd Bishop remarks in his GeekWire article, it resulted in ‘a strange effort to be inclusive.’ So now you know the story behind said strange effort.”

Microsoft later apologized for the events that occurred at the NDC but in the end… any advertising is good advertising to me! Hopefully Aral isn’t left out to dry on this one.