After a long wait, iTunes is now available to download from the Microsoft Store on Windows 10 which is good news for users of Windows 10 S.

Last year, during its Build developer conference, Microsoft made the surprising announcement that iTunes would be coming to the Microsoft Store for Windows 10. The app was said to be arriving at the Microsoft Store by the end of 2017 but was delayed. But, the wait is over and is now available to download for everyone. Here is a look at how to download and install it on your system.

Note: To get it you need to be running Windows 10 Fall Creators Update — version 1709 or above. It’s available for both x86 and x64 systems. If you’re an early adopter with a Windows 10 on ARM PC like the HP Envy x2, it will install the 32-bit version.

iTunes in Microsoft Store on Windows 10

You now can search for “iTunes” in the Store or just head to this link to download iTunes for Windows 10. 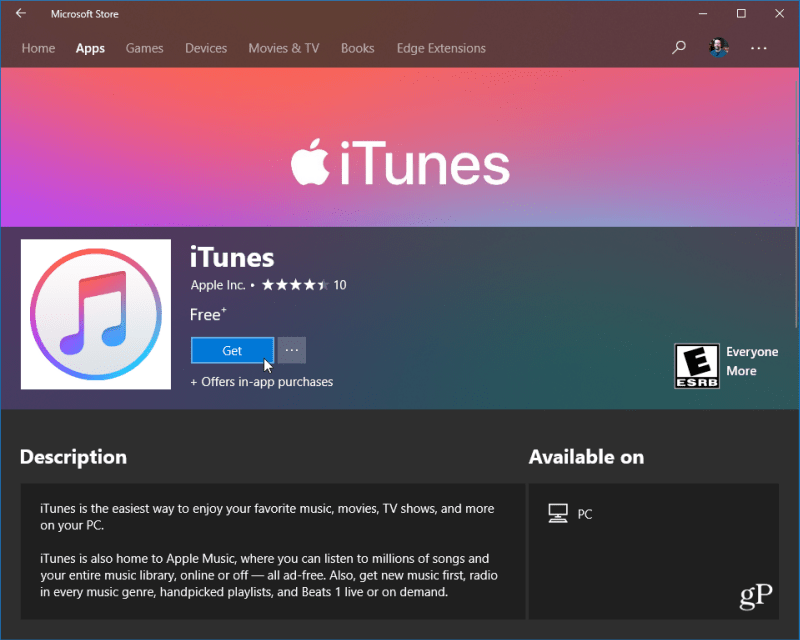 It’s important to note that when you install the Store version, it will remove your previous desktop version of iTunes and migrate your settings over. This is similar to how Spotify worked when it came to the store after Microsoft killed its Groove Music service. Since it’s now available in the Microsoft Store, you shouldn’t have problems installing iTunes on Windows 10 when it was it was on its own.

Now, as most of you know, iTunes on Windows has never been a stellar experience. In fact, several years ago it won our award for Worst Software Ever. And we have covered ways to make iTunes launch and run faster on Windows.

There is really nothing different about this version other than it’s coming from the Microsoft Store and can be installed on Windows 10 S mode. Plus, you don’t need to deal with using Apple’s installer and it should also uninstall easier. Hopefully, we have an improved experience with the new Store version. It was just made available today so we’ll spend some time testing it and have a more detailed review in the coming weeks.

What is your experience with the Windows Store version of iTunes on your Windows 10 system? Let us know how things are going in the comment section below. Or, for additional troubleshooting help and advice, join our Windows 10 Forums.