CBS All Access is now available through the Apple TV app on any device running iOS 12.3 or higher. Here is a look at what to expect and subscribe.

When it comes to cord-cutting, there are a lot of choices out there. Apple is getting into the game with its revamped TV app for iOS that allows you to subscribe to premium channels. Directly from inside the Apple TV app (Apple TV Channels), you can subscribe to premium channels like Showtime, HBO, and Starz. However, at the time, one glaring omission from the lineup was CBS All Access. However, that has changed, and you can now subscribe to it directly from the app.

The CBS All Access streaming service includes a catalog of its network TV shows and movies and exclusive original shows that you can’t get over the air. Popular examples are shows like The Twilight Zone, Star Trek Discovery, and Star Trek: Picard.

Like other premium streaming services, you get a one-week free trial, and the plan is $9.99/month for commercial-free viewing. That’s important to note as you can get a cheaper subscription for $5.99 per month with commercials. But you would need to do that via the standalone app. The cheaper tier is not available through the Apple TV app. 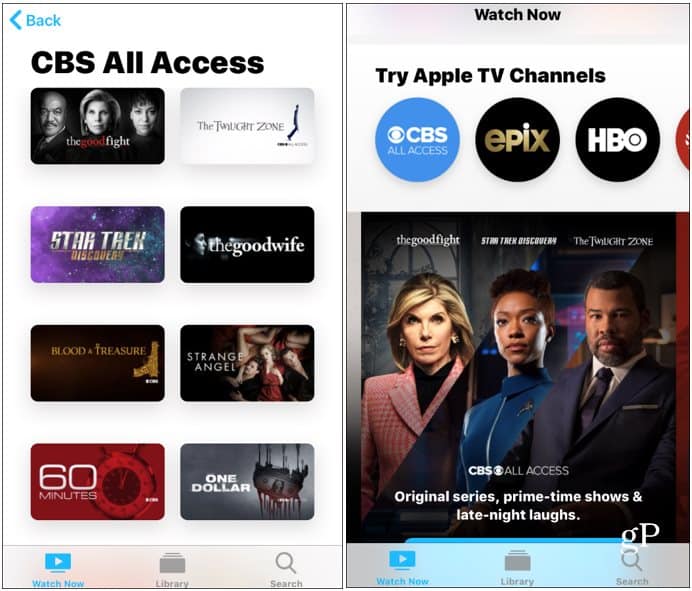 Apple rolled out the revamped Apple TV app earlier this year with the iOS/tvOS 12.3 update. As a cord-cutter, the revamped app makes it easy for you to subscribe to premium channels from one location—no more subscribing to each service’s standalone app.

It’s also important to note that you don’t need an Apple TV box. The TV app is available on any iPad and iPhone running iOS 12.3 or above. You can subscribe and watch premium shows directly on your device. When you subscribe through the app, you pay via your Apple account.

Other platforms offer a similar feature. For example, you can pay for premium channels through The Roku Channel.

Another noteworthy tidbit is the Apple TV app allows you to download shows for offline viewing. And later this year, Apple will be releasing its own original content and its Apple TV+ service.

For more on how to get started, check out our article on how to subscribe to premium channels in the new Apple TV app.

If you’re thinking of ditching cable and ready to join the cord-cutting revolution, make sure to read our guide on how to cut the cord and ditch cable or satellite. You’ll also find more articles in our Cord Cutting Archive.