The Amazon-owned IMDb Freedive free streaming service has been rebranded as “IMDb TV” and is now available on iOS and Android via an update to the IMDb app.

Earlier this year the Amazon-owned IMDb launched its own free ad-supported streaming service called IMDb Freedive. At the time, you could only access it via the web or on a Fire TV device. But this week the service is rolling out to Android and iOS devices via an update to the IMDb mobile app. This allows you to watch the service’s growing catalog of movies and shows directly from your phone or tablet.

Since the initial IMDb Freedive launch earlier this year, it has been rebranded as IMDb TV. At first, it included a limited number of movies and shows including Fringe, Quantum Leap, The Last Samurai, and Awakenings. But since then, the lineup has been expanded through deals with major movie studios like Warner Bros., Sony Pictures, and MGM Studios. Some of the popular titles include modern Oscar winners like La La Land as well as classics like Platoon, Easy Rider, and Bram Stoker’s Dracula. 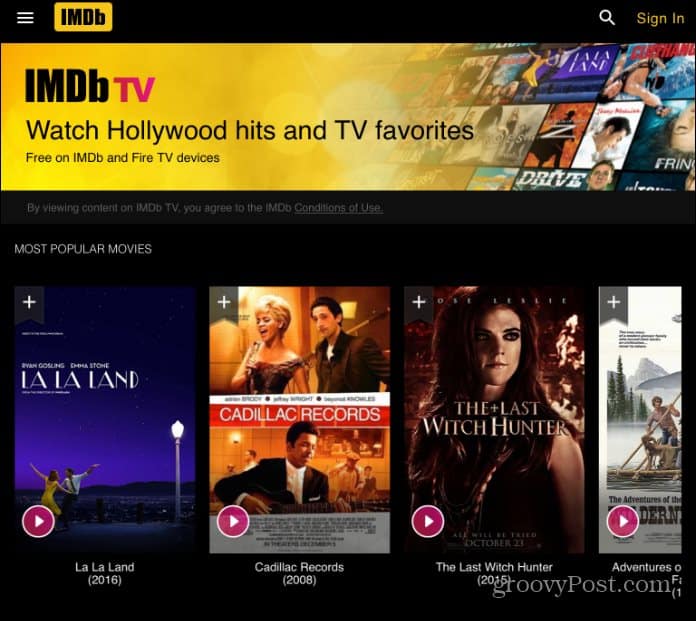 With cord cutting on the rise and the sheer number of available sources, “subscription fatigue” has become a real issue. For example, two big subscription services launching this fall include Disney+ and Apple TV+. But sometimes people just want decent movies and TV shows they can watch for free. The only caveat being you’ll need to put up with some ads.

There are plenty of other streaming services that offer free ad-supported content on a variety of platforms and devices. These services include both live or on-demand content and include the like of The Roku Channel, Pluto TV, Xumo, and Tubi TV. Even Vudu and YouTube have a free movie section.

You can download the IMDB app for Android or iOS. Of course, it’s still also available through your Fire TV devices, or via the web at imdb.com/tv.