Back in November Microsoft announced the Office Insider Program, providing Microsoft Office users with early access to features still under development. Similar to a public beta program, Office users get to try out new features and functionality before they are generally available. The program is open to both Windows and Mac users. Here’s a look at how to sign up for the program for Mac.

First, you need to be running the Office 2016 for Mac suite. If you have it installed already, launch any of the apps in the suite and click Help > Check for Updates.

Check off the Join Office Insider Program on the Microsoft AutoUpdate window and you should be good to go. So far, nothing new is ready yet, but you will be notified as soon as they are. 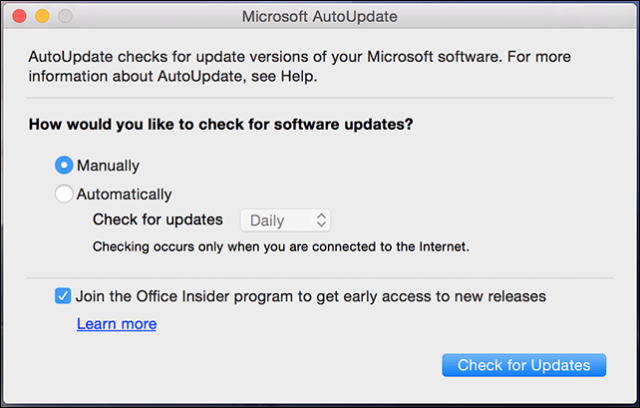 The Microsoft Office Insider program is similar to Microsoft’s Insider Program for Windows 10, which lets users take future versions of Windows 10 under development for a spin. Microsoft moved to a new development branch for Windows 10, code name Redstone in December 2015, rolling out build 11082. After a short break, the Windows Team restarted development in early January 2016, building new features and functions for the new version. Redstone is expected to launch in the second half of 2016.

If you experience problems updating Office for Mac, check out our article for instructions how to work around that issue.