Good news, Client/Server Runtime Subsystem, or csrss.exe, is a critical Windows operating system component.  The process is designed to handle the end-user side of Windows, including console and interface windows, as well as threading.  You’ll find csrss.exe in Windows XP, 2003, Vista, Server 2008, and Windows 7.

By default, csrss.exe is a standard Windows component put there by Microsoft.  It shouldn’t use very much memory, and it will just run in the background and happily keep your computer going.  In other words, it’s perfectly safe and is actually supposed to be there.  However, it can become corrupted or infected and cause problems. We’ll talk more about that below.

If you open up Task Manager (Ctrl+Shift+Esc shortcut on your keyboard), you can see it running.  The User Name should be SYSTEM, and the Description should be Client Server RunTime Process.  Also, the CPU usage should be relatively close to 00 and the memory should be under 10,000 K if you aren’t running anything. 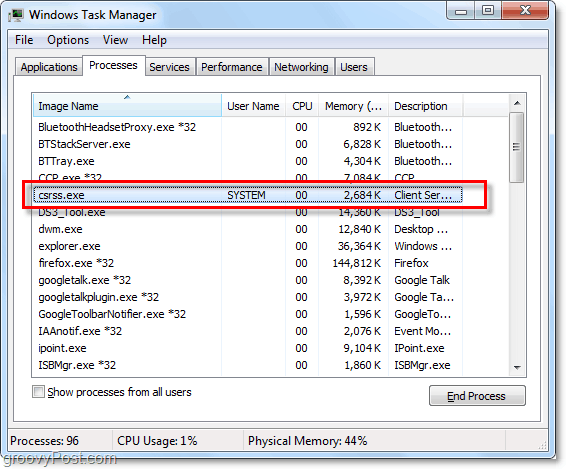 Could csrss.exe be infected with something?

Although relatively uncommon, there have been some who’ve reported problems with their csrss.exe becoming infected or impersonated by malware (malicious software.) Here are a few ways which might help you determine if you’ve got an issue on your hands:

**If you’re running task manager in an elevated prompt you will be able to close critical system processes; this could crash your computer and force a restart so be careful and make sure to save any open document.

What can I do to protect my system components like csrss.exe from becoming infected?

Regardless of which version of Windows you’re running, it’s imperative you always have a solid anti-virus app. installed and updated.  See MrGroove’s guide on system security for more information on staying safe regardless of which operating system you’re using.

There are two main reasons why most users encounter the maxed out CPU error with the csrss.exe process.  The first reason is – typically due to a corrupted user profile.  When this happens, you can fix the error by creating a new Windows user account and then deleting your old one.  Don’t forget to backup your information from your My Documents and other folders before deleting the old profile!

The second problem could be a corrupted registry.  This issue usually occurs when poorly installing written software, hardware failure, or if you’ve been messing around with regedit a bit too much.  There’s not a great fix if you have registry issues. However, the first thing I would do is try to use a System Restore Point to repair the problem.  Try to go back to a date when you know the system was working 100%.  Other than that, you might be looking at a reinstall of Windows 7.  I know, sorry.

Have you had any experience with a rogue csrss.exe or another system process?  Drop a note and let us know what happened!