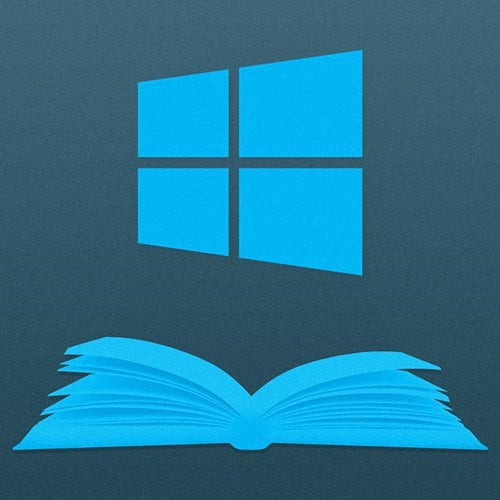 What seemed like an ordinary morning immediately became special to me as soon as I saw that my PC was now ready to proceed with installing Windows 10. A big notification window appeared on my screen, letting me know I can finally upgrade to the new OS. Hooray!

Note: Please don’t consider this article a rant. I am simply sharing my experience with Windows 10 so far. 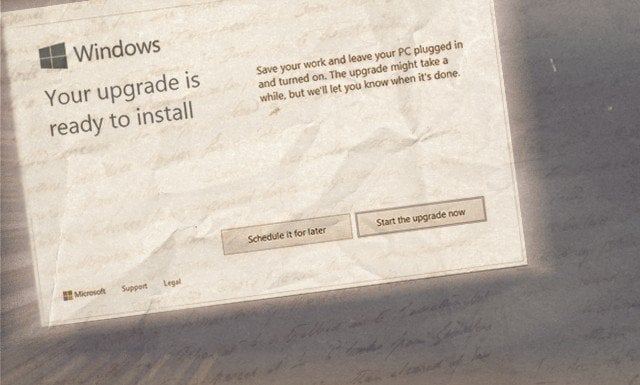 I was really excited. Without a second of hesitation, I slammed my finger on the mouse, clicking on “Start the upgrade now”. My computer immediately restarted and within minutes I was already installing the new Windows. I didn’t leave my office chair for a single second as I watched the percentage slowly go all the way up to one hundred. 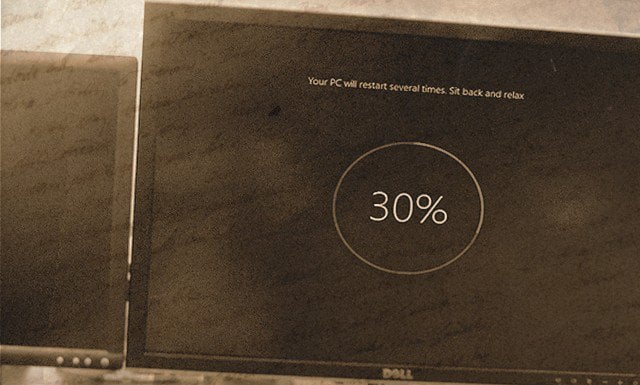 The entire upgrade took about 25 minutes – pretty quick, considering I have quite a few games and applications installed. I couldn’t wait to see my new desktop!

As soon as the install process was completed, I logged in. Before my eyes I saw the unveiling of a fresh new UI. Smooth and minimal animations, gentle blur effects, snappy performance and a neat new Action Center and Start Menu. What could be better? 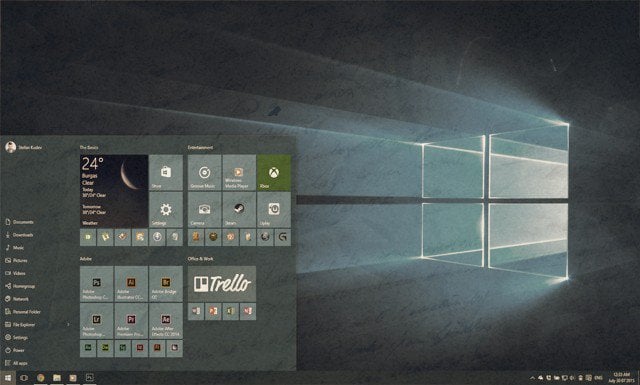 The brand new Start Menu was awesome. I quickly arranged my tiles into groups and immediately felt at home. Search was also significantly faster and better than the one in Windows 8.1 – even though Cortana was unavailable in my country I was happy to see that Start Search was back to the familiar style we all know and love from Vista and 7.

Action Center also impressed me. As an Android user, the toggle icons felt familiar and easy to use. Even though I won’t be switching them on and off as frequently as I do on my phone, it’s nice to know that when I need to do it I’ll do it much faster.

“So far so good!” – I thought to myself and continued with my daily tasks. “Time to see how Windows 10 performs in some everyday scenarios.”

What better way to try out the performance improvements of the new Windows than by trying out my most frequently used program – Photoshop! I opened up my neatly organized Start Menu, clicked the Photoshop icon under the Adobe category and watched as the loading splash screen appeared almost instantaneously. 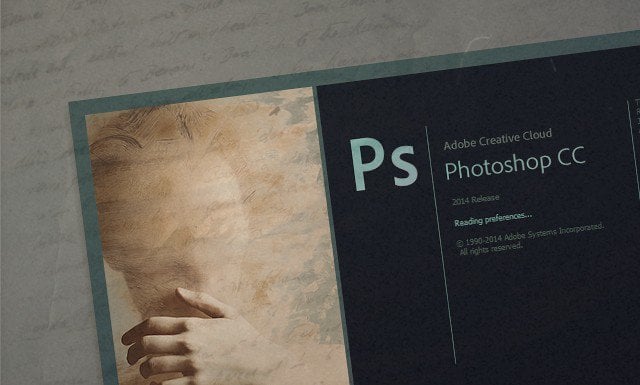 Photoshop loaded and I quickly pressed Ctrl+N to create a new document. But then nothing happened. “Huh?” I pressed Ctrl+N again, making sure it wasn’t my fault, but no – still nothing. I tried clicking the File menu to select the Open option from there, but the menu wasn’t opening at all. “Hm, I should close Photoshop and open it again to see if it helps” — I thought, but even the minimize, maximize and close buttons weren’t working.

At this point I turned to the trusty Task Manager – upon opening it, Photoshop was the top process with most resource usage and was marked with the dreadful “Not Responding”. I force-quit Photoshop and tried opening it a few moments later. But each new try provided the same results – as soon as I get past the splash screen Photoshop was unresponsive.

I tried to look for some solutions on the web, but found absolutely nothing – running the program in compatibility mode didn’t work (as if that has ever worked on anything…) and neither did running as an administrator. “Looks like a reinstall is inevitable” – I really, really wanted to be completely wrong with that statement, yet I was right all along. No fix worked and I had to clear all my preferences and do a reinstall.

Luckily, after the reinstall Photoshop was working just fine. It did take me about 15 minutes to set up my workspace and import all my presets, but it’s a small price to pay for actually getting Photoshop to work.

“Right, so after that short trip through hell it’s time to relax”- time to play some music.

I opened up Windows 10’s new Groove Music app and clicked on the first album I saw. Aaaaaaaaand… nothing. I turned up my speakers but no sound was coming from them at all. 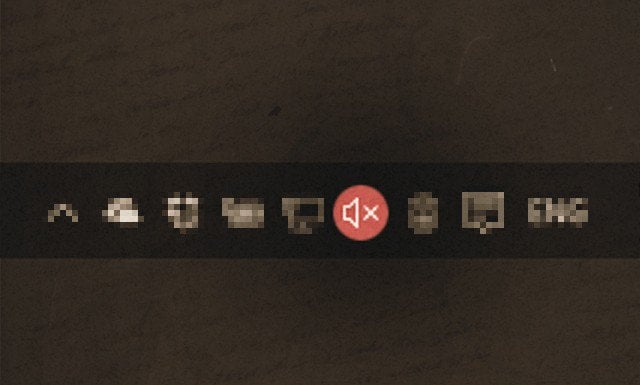 “Really, Windows? Really? An audio driver issue?” I was rather baffled – the last time I had to manually install audio drivers was when I was fixing my grandma’s laptop – and that’s a 12-year-old notebook running Windows XP so it has the perfect excuse. Either way, here I am, marching over to the Asus website to manually download drivers for my brand new Asus ROG gaming laptop. For a second, I checked the calendar to make sure it wasn’t 2003, but no — I was still in present day, 2015. Weird.

I downloaded the ZIP file, extracted it, installed the drivers in a matter of seconds and rebooted. I opened Groove Music again and played the same album. I turned up the volume and I could finally hear sound! Yay! Somehow turning up the volume felt oddly delayed, but eh – it’s probably supposed to “fade” audio to make it as smooth as the new effects. No big deal. But getting to the middle of the track something didn’t sound right. The vocals were completely smashed and the entire track sounded like it was fed through a compressor. I was 100% sure this wasn’t the way the song sounded.

My first guess was that the new drivers came with one of those b******* audio enhancement features. Very likely – this is Realtek, after all. Heck, that’s probably what’s causing the delay, too. So I went into the Realtek config utility and very thoroughly scanned for any useless filters that may be enabled by default. To my surprise, everything was completely turned off. I tried going into the Playback device properties as well, but all effects and enhancements were disabled from there as well. All in all, I was left with a clean driver install that somehow caused my audio to be compressed and delayed. Great.

After a bit of research on the web I came across multiple forum posts about this problem. Apparently, this was common in Asus laptops using Realtek audio. According to some people, Realtek were “aware of the issue and working on finding a solution”.

“Alright, whatever.” I went out with my friends for about an hour and came back home shortly after. Time to see what I missed on the web while I was away.

Is it cold in here, or is it just FREEZING!

It was a rather hot day outside – around 80° F and the humidity was awful. Coming back home to a nicely air-conditioned room felt freezing! No big deal though – I turned off the AC and turned on my laptop again. 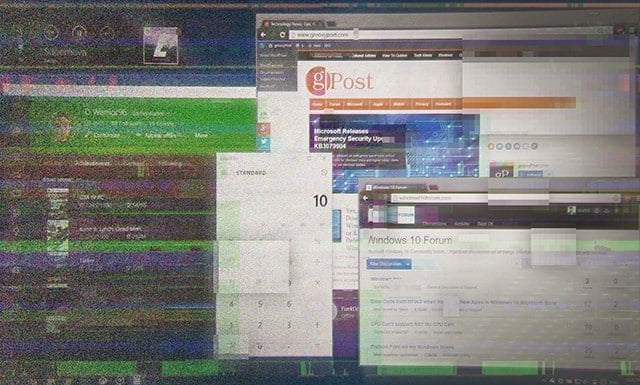 I opened up Chrome and stacked up the usual array of tabs – Facebook, Gmail, YouTube, groovyPost, and from today on – Windows 10 Forum. Pretty casual. At this point, however, the room wasn’t the only thing freezing – my computer occasionally froze up as well! I was beyond shocked – if a Core i7 machine with 16GB of DDR3 RAM can’t handle Chrome because of Windows 10 what about all my programs and games? Will they cause the laptop to CRASH?

I tried to remain calm and looked up some solutions on the web. Apparently, I had to update my nVIDIA driver to get everything to run smoothly. So I did. A quick reboot later and it seemed like the problem was solved. But it wasn’t. The glitching and freezing was still there, only this time less noticeable and less frequent.

“It will have to do for now.” – I thought to myself, hoping that a future driver update will completely kill the issue.

So after all this I decided – “That’s it! I’m gonna write an article going through all the troubles Windows 10 brought me!” I logged into groovyPost and started writing the article. I quickly jotted down the first couple of lines and then press Ctrl+S – a handy habit to have when working on anything, really. 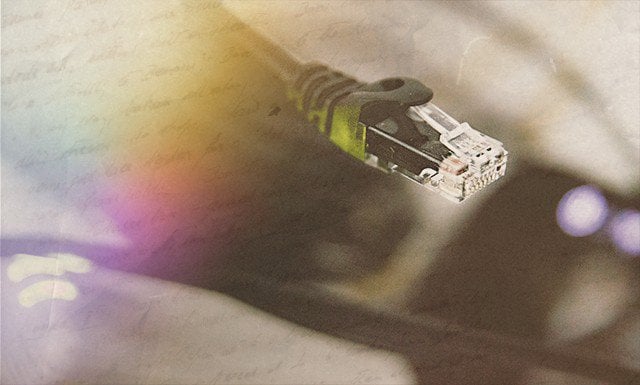 But the page failed to load. I looked down at the bottom right corner only to see a big cross next to the Ethernet icon. It immediately flashed and switched to Wi-Fi. “And now my ethernet card stops working all out of the blue?!?!” I made a second attempt at saving the progress and this time it worked – over Wi-Fi, obviously. I continued writing my article only to have my internet completely cut off in about 20 minutes.

Sleepy, confused and frustrated, I went to bed trying not to think about the problem too much. As I was tucking into bed I unlocked my phone to put it in silent mode, only to find out it had disconnected from my Wi-Fi network and switched to 3G instead. Yup – thankfully my internet issues weren’t OS related – my ISP was to blame this time.

In the morning I had a fully working connection both through Wi-Fi and Ethernet. My only suggestion as to what happened was the following:

I should have probably just tried to unplug the cable and plug it back in, but hey – at least I got it all figured out eventually.

So what happens next?

At the end of the day Windows 10 is not a bad OS by all means. It’s a good wine that just needs to mature a little bit more until it’s ready for consumption. I may have opened my bottle a bit too soon, but then again I can only blame myself. 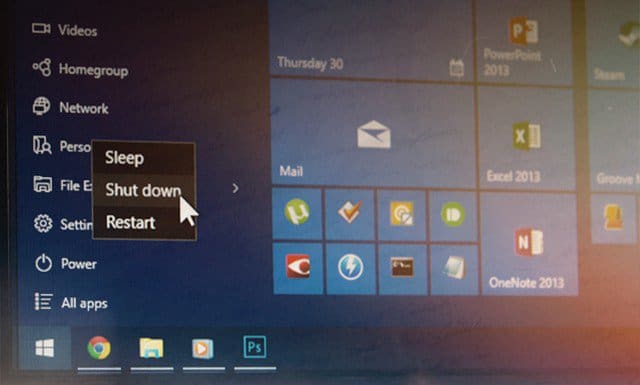 I’m not entirely sure whether I will be downgrading to Windows 8.1 or not. I’m still optimistic about the future of Windows 10 and I’m willing to keep on using it as things get better. I already made the dreadful mistake of deleting my Windows.old folder right after install, so if I do want to downgrade I’ll have to do a clean install. Ouch.

It’s more than obvious that my Windows 10 upgrade experience was far from easy and non-problematic, but this all depends on the type of computer you’re using and what you’re using it for. I have yet to try out some more intense gaming and video editing which will most likely determine whether I’ll stick with Windows 10 or not.

Did you upgrade to Windows 10? How is the new OS treating you so far? Would love to hear your story in the comments!