Instagram is now available from the Windows Store as a universal app. Check out our review for screenshots and features.

Instagram, the photo-centric social media app designed for smartphones, is now available for Windows 10. The Instagram universal app is available from the Microsoft Store and installed on any Windows 10 device with version 1507 or later. The only question: what does the Windows 10 Instagram app have to offer that the web version and smartphone version don’t? The disappointing answer: not much.

Instagram, as you may know, is owned by Facebook. It’s used primarily for sharing photos, but you can share short video clips, too. Videos autoplay in your Instagram feed, just as they do in your Facebook feed. Previously, Instagram pushed to restrict the app to the mobile smartphone experience. But as the line between mobile and desktop operating systems has blurred, more traditionally, mobile apps are available as universal apps. This includes Facebook, Messenger, Twitter, WhatsApp, and now Instagram, which are now available as universal Windows 10. I was particularly excited to see what the social media giant would bring to the desktop with its Windows Store app.

A universal app is an app that’s meant to provide a unified, consistent experience across multiple platforms and screen sizes. Whether it’s an 8-inch touchscreen or a desktop with a keyboard and mouse, a universal app is meant to scale intuitively to the environment.

So, does the Instagram app do that? Let’s take a look.

Upon launching Instagram, you can immediately sense this app that was put together with not much care. Why would I say this? Just look at the sign-in screen. 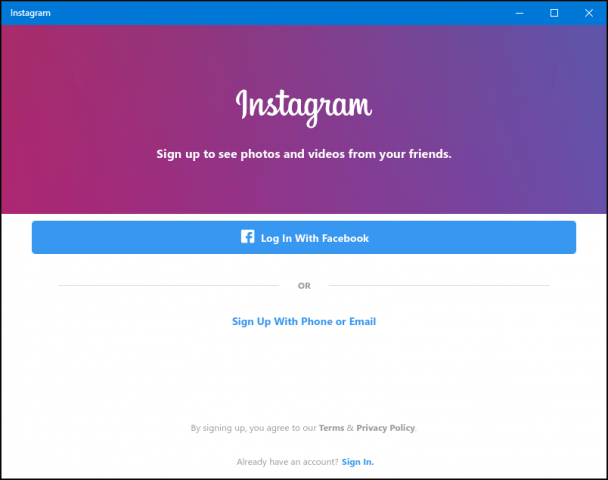 It certainly doesn’t look like it’s a universal app designed to scale across various devices. Instagram never really cared much for larger devices. The app was intentionally designed for smartphones like the iPhone 4 and below. Even large phablet-sized devices like the iPhone Plus and Samsung Note don’t exude any distinct advantages of running Instagram for iOS or Android. The same is true for the Windows 10 Instagram app.

Since its launch on Windows 10, Instagram has been slowly adding support for some of the newer innovations available on its mobile counterpart, like videos. The interface is quite basic; the photo stream presents an endless stream of images from those you follow with icons on the bottom for home, search, like, and your profile. 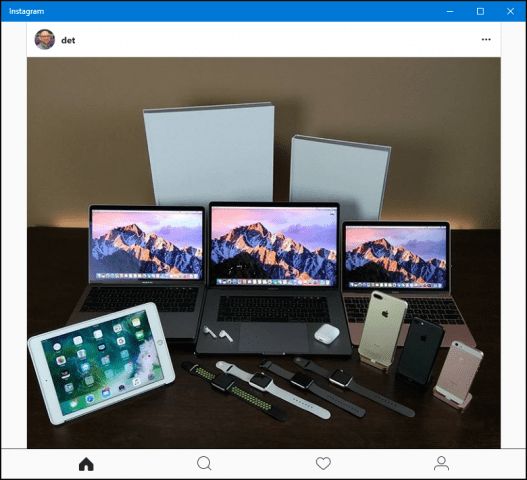 Instagram on the desktop feels more like a viewer than a native app with all of its rich capabilities. As you can see in the screenshot below, the following video looks like it was intended for a smartphone portrait mode. Menu items like send a message and add a comment are not properly laid out; this would be great for taking advantage of the expansive interface available on the larger screen. Other functions like tapping through looped videos and photos are not yet supported, neither will you be able to view live videos. 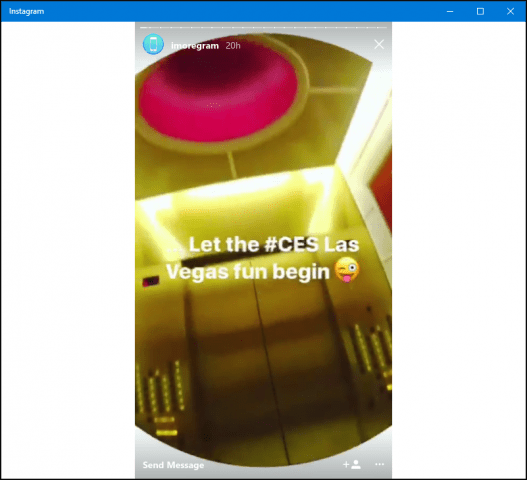 The biggest disappointment, of course, is that you can’t post to Instagram from the desktop; the integral camera button is not there. This adds further proof to my conclusion that the aim of Instagram on the desktop is more about having a way to keep up with what’s going on if you don’t own a mobile device capable of running the app – which is kind of hard to imagine – considering that the cheapest Android smartphone can run the app. The Windows 10 Instagram app is designed primarily for lurkers rather than participants—but then again, you could always do that from the web. 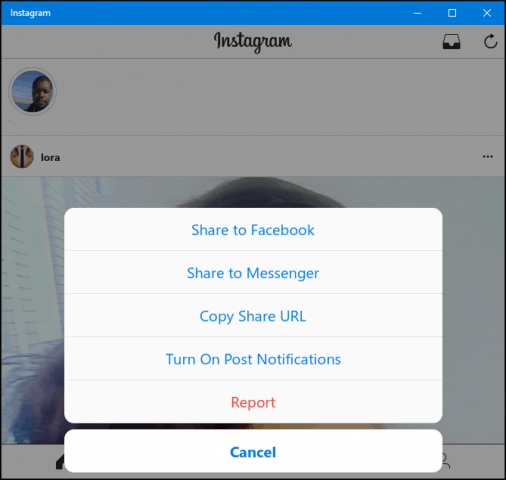 You can still perform some of the more mundane activities like confirm friend requests, send direct messages and comment on photos. However, for more of the richer capabilities, Instagram is known for, the mobile app is still the only way to go.

Verdict: The Windows 10 Instagram app isn’t much to write home about.

Please tell us what you think. Have you been using any of the traditionally mobile apps now available for Windows 10? If so, what do you think; could they replace mobile versions or effectively compliment them?