The latest version of Apples mobile operating system, iOS version 10, is now available for iPhone, iPad, and iPod Touch. iOS 10 includes numerous features and improvements, such as access to widgets from the lock screen, improved Control Center, better system-wide support for 3D Touch and fun visual effects Messages and Photos. Many of the built-in apps such as Maps, Photos, News and Music have been updated too. In this article, we show you how to upgrade from a previous version of iOS to iOS 10. Please note, some features will require enhanced hardware; for instance, the Raise to Wake feature requires a device with an M9 motion coprocessor, only available on the iPhone 6 and later.

Install iOS 10 on your Apple Device

Before you can install the latest version of iOS, you need to ensure your device supports it. Here is a table of the supported devices you can run iOS 10 on. Users have complained in the past that newer versions of iOS tend to make their Apple device perform slower. You might want to backup and archive before upgrading; backing up, will make it easy to restore your device if needed. There were some early reports of iOS 10 upgrades failing and bricking the device.

Once you have determined your device is supported, and it is backed up, you can start the upgrade. Tap the settings icon and swipe down to General. Tap Software Update, you should see iOS 10 as an available update. Swipe down then tap the Download and install button. If you are on a mobile data connection, this will be grayed out, try switching to a wireless connection, then try again. You will be prompted to enter your passcode. If you don’t see the update at all, restart your device then check again. 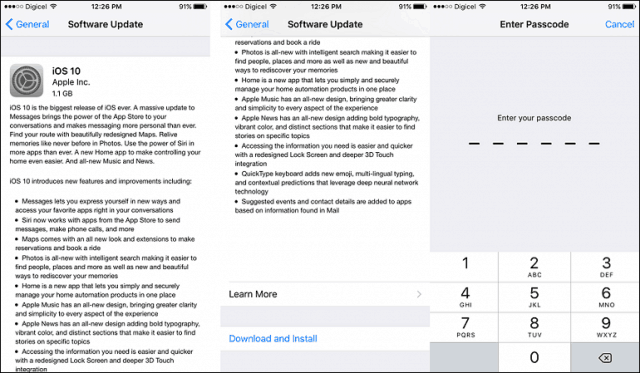 Wait while iOS 10 is downloaded and installed. When complete, restart your device to finish the installation. You can also set a reminder to install at a later time. 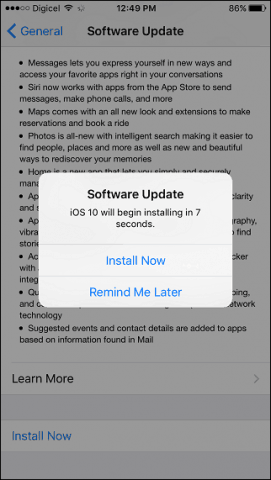 That’s it! The first place I would check after updating is App Store for any app updates. If you have any problems, check Settings > General > Software Updates. Apple often does parallel development, with the first maintenance update coinciding with the general master release. 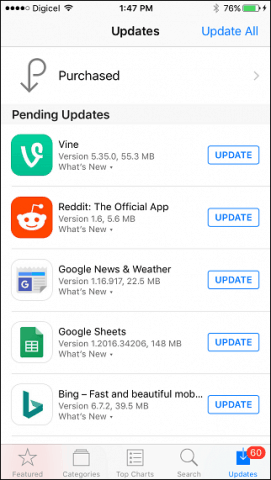 If you are using an Apple device with limited space, especially those with 16 GBs, you can try updating through iTunes. Download then install the latest version of iTunes, if you have not already, connect your device, launch iTunes, select your device then click Check for Updates.

To get right to the point, I say yes, if your device will support it. Features such as Raise to Wake available on the iPhone 6 and later models is a welcome feature. Let’s dig into a few of the other benefits/change as well.

The Lock Screen is more productive in iOS 10 compared to iOS 9. Usually, the reason I unlock my iPhone is to view details about notifications I see on the lock screen. They are more detailed and useful. I have been reading a few complaints about the behavior of the lock screen in iOS 10. The slide to unlock action is no longer available. Instead, to unlock the device, you press the Touch ID button. If you want to access the camera, just swipe to the left. If you want to access apps and notifications, swipe to the right. You can go back to the home screen by pressing the Home button again. 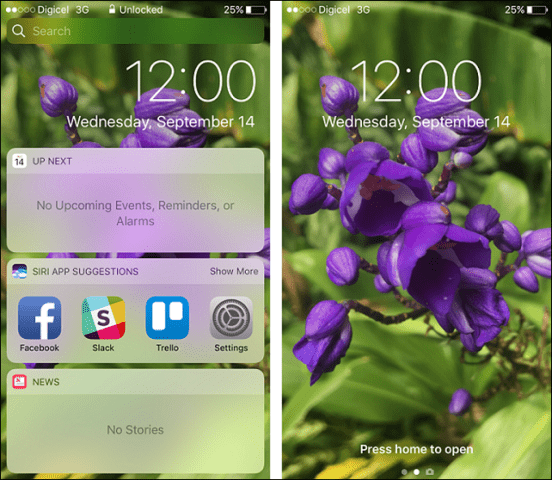 Control Center more functional iOS 10; the biggest addition is more 3D Touch functions for utilities like Flashlight, Timer, and the Camera. You can also access a secondary widget for music player controls and even interact with apps like Shazam. 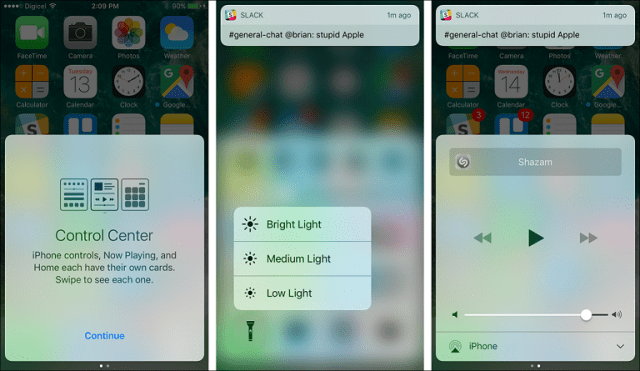 Notification Center is also more useful, offering a selection widget you can quickly glance at for weather, news and calendar events. 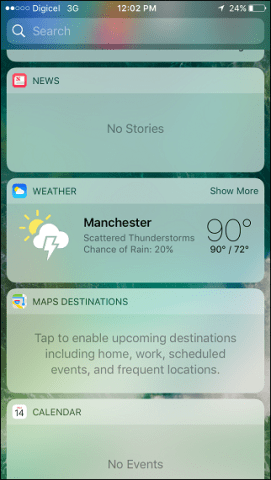 There are some new fringe features like Messages supporting fun, gimmicky stickers you can use to lighten up your conversations. I wasn’t able to try those yet, but it includes a store where you can buy and download new stickers. I guess that’s part of Apple’s push to seek more revenue out of services in the long run.

The Photos feature includes an intelligent auto movie function called Memories and creating subtle effects and transitions with background music. It’s not perfect, to be honest, and I don’t get all mushy inside; if you have an excellent photo collection, you will love it. Other improvements include the ability to search and find people in your photos. Several apps such as Music, News feature all new designs making them easier to navigate and discover content.

Siri and Maps both include extension support, which should make it easier for third-party developers to enhance with additional functionality and features. If you use the Mail app, third-party apps can benefit suggested events and contact details. Although I don’t use Apples built-in keyboard anymore, the keyboard includes new emoji, multi-lingual typing, and more contextual support.

So, should you upgrade? If you own a capable device, I don’t see a downside. Not only will it allow you to stay updated from a security standpoint, but you will also get access to all the new features coming from Apple now and in future updates.

On the performance and stability side, I’ve been very happy that this update hasn’t slowed me down yet. With previous updates, older phones were not able to keep up with all the new features however with IOS 10; it appears Apple tuned it nicely for older devices (like mine).

Tell us what you think of the latest version and how is your device performing since updating?