With the recent release of the Galaxy S2 and the iPhone 4S, AT&T is wielding a strong lineup of smartphones. The currently rumored AT&T phones are not close enough to release nor impressive enough to merit holding out for to purchase. One thing to keep in mind, however, is that AT&T is rolling out LTE to more cities 2012, so if you want the best 4G service and live in a planned rollout area, you may want to wait until they offer LTE smartphones. It may be a while since no LTE smartphones have yet been officially announced.

Samsung launched their Galaxy S2 line of phones in Europe and Asia to high fanfare earlier this year. Even though it has taken six months to reach the US, AT&T’s Galaxy S2 still remains at the top of the smartphone market. It boasts Samsung’s best-of-class dual-core 1.2 GHz Exynos processor, 1GB RAM  and a beautiful 4.3-inch Super AMOLED Plus display. The 480×800 resolution isn’t as high as we’d like, but the sharpness and brightness of the screen make up for any qualms we have. Its 8-megapixel camera takes great shots, giving the iPhone 4S camera a close competitor. Another highlight of this phone is its thinness: .35 inches. That’s .02 inches thinner than the iPhone 4S. This phone is snappy, beautiful, and a joy to use.

The Apple iPhone 4S is great phone for Apple enthusiasts. Packed with a  dual-core 1GHz processor, a best-in-class 8-megapixel camera  and the new Siri voice assistant – it performs well as a daily workhorse. It runs iOS5 with its major improvement of keeping your phone synced with their cloud servers. This hardware upgrade, however, is not revolutionary. It keeps the small 3.5-inch screen that no longer seems adequate when compared to its competitors. It also lacks a 4G radio, although this is less of a problem on AT&T’s questionably labeled “4G” HSPA+ network. We have detailed both our excitement and disappointment with the iPhone 4S phone here. The iPhone 4S is quite a different phone than the Galaxy S2 and our recommendation is to go into your local store and hold them both in your hands. Either one will be a good choice, so this decision comes down to form factor and whether you’re already invested in iOS or Android.

Motorola took CES 2011 by storm with the Atrix and its laptop dock accessory. Despite that strong start and initially positive reviews, the phone was plagued with early bugs and customer complaints. Motorola has come back with the Atrix 2, a relatively minor upgrade from its predecessor. It still has a 1GHz processor (albeit now OMAP rather than Tegra), 1GB RAM, 8-megapixel camera and a 4.3-inch qHD display (now without the PenTile pixel arrangement). With these improvements and a $99 starting price, the Atrix 2 should be at the top of a short list for the budget-conscious buyer. 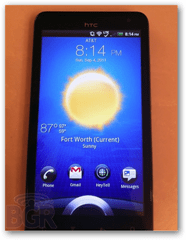 The most exciting rumors coming out of AT&T are those concerning their upcoming LTE devices. We don’t feel that AT&T’s LTE network is developed enough to make them worth waiting for, but if you are set on an LTE device, the HTC Holiday is shaping up to be a great choice. It will have a dual-core 1.2 GHz processor, 4.5-inch qHD display, 1GB of RAM, an 8-megapixel camera and a 1.3-megapixel front-facing camera. Even though there is no release date yet, we look forward to getting our hands on this phone and testing out AT&T’s LTE network.

(picture via BGR, specs via Engadget) 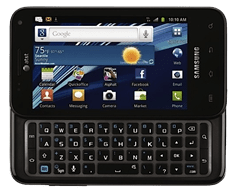 If you love typing on a physical keyboard, the Captivate Glide may be for you. It will have a dual-core 1Ghz Tegra 2 processor, 1 GB RAM and a WVGA 4-inch Super AMOLED display. Its 8-megapixel camera will be able to shoot video at 1080p – making this the perfect smartphone for those who love to type and catch HD video at the same time.

Google and Samsung recently announced both an LTE and HSPA+ version of the Galaxy Nexus. The phone has a dual-core 1.2 GHz OMAP 4460 processor, 1GB RAM, an 8-megapixel camera and a 4.65-inch 720p AMOLED HD display.  It is also running Google’s latest version of Android – Ice Cream Sandwich (4.0). Although there are no specific rumors of the Galaxy Nexus coming to AT&T, they must have an ICS smartphone in the plans sometime soon, and the Galaxy Nexus would not be a bad choice.